Is Lilli Kay’s Clara a Real Cowgirl in Yellowstone?

Paramount Network’s ‘Yellowstone‘ is set on the titular ranch belonging to the Duttons, a family devoted to protecting their ancestral land from external threats. The series is high on Western elements and features several cowboys and cowgirls in its ensemble cast. A recent addition to the cast in the fifth season is actress Lilli Kay as Clara Brewer, who quickly assimilates into the ranch’s environment. Therefore, viewers must wonder if the character and actress have cowgirl skills. In that case, here is everything we discovered about the background of Lilli Kay’s Clara in ‘Yellowstone.’ SPOILERS AHEAD!

Is Clara a Cowgirl?

Clara Brewer is introduced in the second episode of ‘Yellowstone’ season 5, titled ‘The Sting of Wisdom.’ She is the new personal assistant of John Dutton after he becomes the Governor of Montana and assumes office. Clara is an intelligent and sharp woman who is proficient at her job. Despite John’s dislike towards bureaucratic affairs, she neatly organizes his schedules and reminds him of his responsibilities. On the surface, Clara seems to be a typical city girl who is wowed by life on the ranch when she first visits the Yellowstone Dutton Ranch. 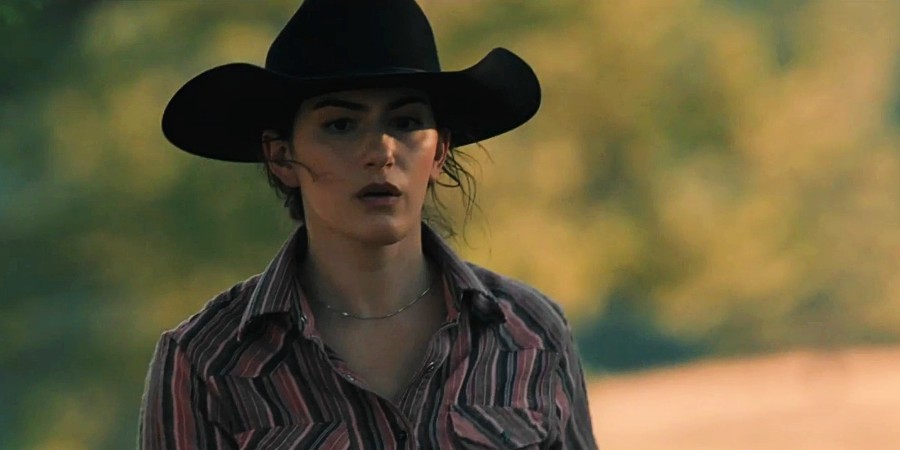 However, in the fifth episode, titled ‘Watch ’em Ride Away,’ Clara prepares to accompany John and the other ranch hands on a two-day camping trip to brand the ranch cattle. Clara appears well-versed in horse riding and even dresses in a cowgirl avatar, hinting that she has experience as a cowgirl. Clara states that she hails from Miles City, Montana, a town rooted in cowboy culture. Hence, it is safe to say that Clara does have the credentials to be a cowgirl.

Is Lilli Kay a Real Cowgirl?

In ‘Yellowstone,’ actress Lilli Kay essays the role of Clara starting in the fifth season. She appears in a recurring capacity and has a prominent presence in the season’s fourth, fifth, and sixth episodes. Kay is known for her performance as Fia Baxter in the legal drama series ‘Your Honor‘ starring Bryan Cranston in the lead role. In ‘Yellowstone,’ Kay’s Clara is introduced as a simple office assistant. Later, she reveals that, like the Duttons, she is also rooted in the culture of Montana and has some ranching skills. Therefore, viewers must be curious to learn whether actress Lilli Kay also has some real-life cowgirl skills.

Unlike Clara, Kay does not hail from Montana. The actress was born and brought up in Brooklyn, New York, in an Italian-American family. She attended the Wildwood School and The Thacher School in California before going to Carnegie Mellon University, Pittsburg, Pennsylvania. Kay developed her acting skills by performing in plays and made her screen debut in 2018. Therefore, it seems like most of Kay’s formal education and training is in the field of acting.

Read More: Is Lloyd on Yellowstone a Real Cowboy?