Is Netflix’s The Chalk Line Based on a True Story?

Originally titled ‘Jaula,’ Netflix’s ‘The Chalk Line‘ is a horror thriller movie that revolves around a girl named Clara who crosses paths with a couple, and chaos ensues. Paula (Elena Anaya) and Simón (Pablo Molinero) find Clara (Eva Tennear) in the middle of the road and take her to a hospital, where they learn that the girl is traumatized and not much is known about her identity. She doesn’t talk much, sits within a box she drew with chalk, and is visibly scared to step out of it. Paula decides to form a bond with this girl, understand her, and unravel her dark past.

The intriguing Spanish film is the debut feature film of director Ignacio Tatay. It touches upon a few terrifying subjects and feels realistic right from the beginning. The actors’ performances are compelling, and the emotions they depict seem authentic enough to make one wonder if the film is based on a true story or a book. If you’ve been looking for an answer to this question, we’ve got you covered. Let’s find out if ‘The Chalk Line’ is close to a book or reality!

Is The Chalk Line a True Story?

‘The Chalk Line’ seems to have been inspired by a true story. With a script penned by Isabel Peña and director Ignacio Tatay, several themes and character arcs of the film’s narrative resemble the case of Josef Fritzl, who had held his own daughter, Elisabeth Fritzl, captive in his home’s basement in the town of Amstetten, Lower Austria, Austria for 24 years. According to reports, Josef repeatedly sexually abused, assaulted, and raped his daughter during this time. The constant abuse from 1984 to 2008 resulted in Elisabeth having seven children.

While three of Elisabeth’s children remained in the basement, three were brought up and reported as children who their family had abandoned; 1 of the kids passed away soon after birth, reportedly due to Fritzl’s negligence. The Netflix original revolves around abduction, child sexual abuse, and murder. Carla, Ingrid, and Eduardo possess a similar dynamic between Fritzl, his daughter, and their children. For instance, Eduardo holds Ingrid captive in his basement and later murders her. Her autopsy report reveals she had gone through sexual trauma and had been raped. 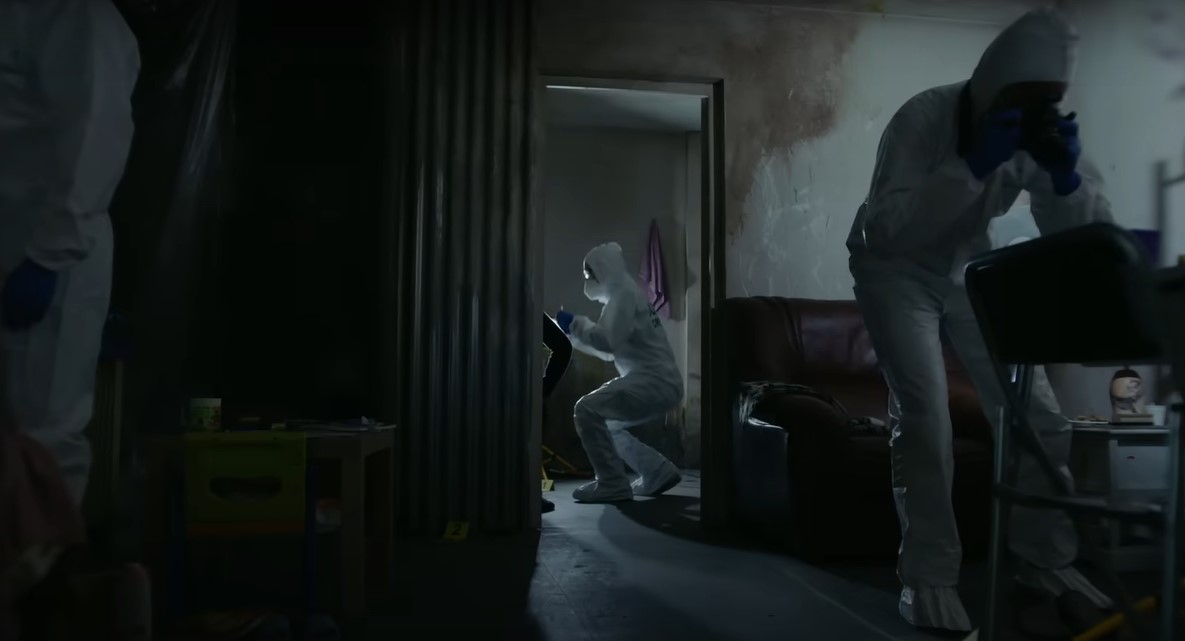 Towards the end of ‘The Chalk Line,’ Carla confirms she is Ingrid’s daughter. Although it isn’t explicitly mentioned in the movie, it is a logical conclusion that Eduardo is her father, and she was born in the basement. These are a couple of crucial similarities between the film and the real-life story. However, there are a few differences as well. While Josef Fritzl falsely imprisoned his daughter, Eduardo abducts Ingrid.

Furthermore, Eduardo’s wife, Matie, is aware of his actions and decides to help him keep his secret in exchange for her own needs. However, in the Fritzl case, Josef’s wife, Rosemarie, maintained that she was unaware of everything that happened, and Josef backed her story. While Eduardo holds Ingrid captive for about eight years, Josef actually held Elisabeth in his dungeon for 24 years. Finally, while Eduardo has one child, Josef fathered seven children.

Above and beyond these, one glaring difference between the Netflix film and the case is the way the victims gain freedom. On the one hand, Paula and Simón save Clara through the former’s exhaustive independent investigation. On the other hand, Elisabeth and her children saw the light of day when Josef agreed to Elisabeth’s request after her elder daughter fell ill, and she begged him to take her to a hospital. This led to a series of complications for the man, also dubbed “The Monster of Amstetten,” who couldn’t convincingly explain the mysterious identity of the girl he admitted to a hospital.

The police soon started investigating this and even reopened Elisabeth’s missing person case. This slowly cornered Josef, who finally decided to bring Elisabeth and her remaining children out of the cellar he had kept them in for many years. He was arrested in April 2008 and pleaded guilty to all charges in 2009. Josef Fritzl was sentenced to life. In the film, Paula’s character keeps us hooked to the narrative as she gains Clara’s trust and teaches her to step outside the box made from chalk.

Although the film is a mystery thriller, it carries undertones of manipulation and conditioning. Clara is petrified of crossing the line because Eduardo has instilled an innate fear in her mind. Every time Clara broke this rule, he punished her mother, Ingrid, leading her to perceive this as her reality. Paula plays an intrinsic role in helping her see beyond it, thus empowering her to live a life free of captivity. To reiterate, though not precisely rooted in reality, ‘The Chalk Line’ explores the aforementioned subjects with a significant amount of realism.

Read More: Where Was Netflix’s The Chalk Line Filmed?