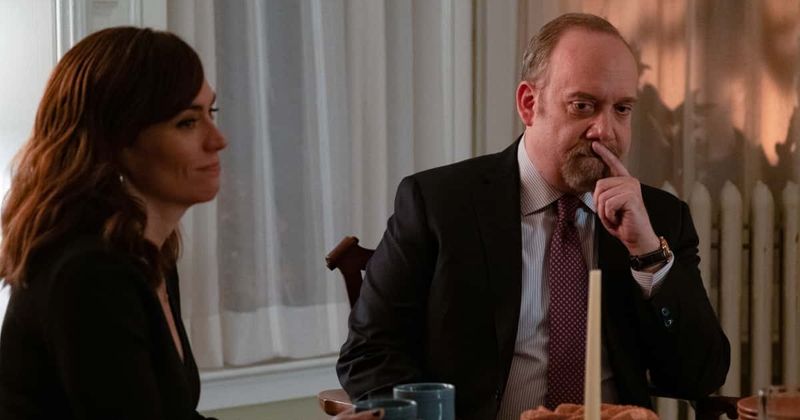 Paul Giamatti is by far one of the best character actors currently active in the industry. From ‘Sideways’ to ‘Cinderella Man’ to ‘American Splendor,’ he has delivered one superlative performance after the other in his illustrious career. In the first five seasons of ‘Billions,’ Giamatti’s Chuck Rhoades, Jr. serves as the perfect foil for Damian Lewis’ Robert “Bobby” Axelrod.

After Lewis’ departure, the role of Chuck’s adversary was taken up by Corey Stoll’s Mike Prince. In season 6 episode 9, titled ‘Hindenburg,’ Chuck suffers a serious setback in his career when he is removed from his position as the Attorney General for the US state of New York. If you are wondering whether Chuck is leaving ‘Billions’, here is what you need to know. SPOILERS AHEAD.

What Happened to Chuck?

In season 6, Chuck encounters an entirely different kind of adversary in Mike Prince. If Axe represents the old-school, self-made robber baron archetype, then Prince is the new age billionaire who genuinely wants to leave the world in a better shape than he found it. In season 5, Chuck and Prince were allies, collaborating because of their mutual desire to take Axe down. Toward the end of the season, Prince breaks ranks and gives Axe a way out. In exchange for two billion dollars, he takes over Axe’s business. Infuriated by this betrayal, Chuck decides to bring down the entire billionaire class in season 6.

Prince spends the first seven episodes of season 6 trying to get the 2028 Summer Olympics to New York. He even succeeds, but his victory celebration lasts for a short time as Chuck turns Prince’s partners against him, and the Olympics moves to Los Angeles, its original venue for 2028. In episode 9, Prince is out for blood. He diverts Chuck’s attention with the issues involving the exclusive Vanderbilt Club while he sets up his pieces. Despite an impassioned speech at the State Senate, Chuck is fired from his position as the Attorney General following a vote.

No, Chuck isn’t leaving ‘Billions.’ Although a character being fired or quitting the job in ‘Billions’ has often indicated the said character leaving the show in the past, different rules probably apply with Chuck, who is one of the main characters in the series along with Prince. The conflict between the two of them is at the core of the narrative in season 6. And the writers are highly unlikely to abandon it only halfway into the season.

After Chuck is removed, Daevisha “Dave” Mahar (Sakina Jaffrey) is made the interim Attorney General. While Dave is an exceptionally competent lawyer, she is not the collection of contradictions that is Chuck. We know that Chuck will continue to be part of the narrative because no official statement has been yet made announcing anything to the contrary.

When Axe was written out of the show as per Lewis’ wishes, it was a piece of important entertainment news. If Giamatti were making an exit, it would have been reported as well. Moreover, the war between Prince and Chuck is just heating up. This is just a temporary setback for the man-of-law. He will undoubtedly keep fighting, even if he is stripped of his powers.

Read More: Is Wendy a Buddhist in Billions?