Is The Hangover Based on a True Story?

With Todd Phillips at the helm, the 2009 buddy comedy movie ‘The Hangover’ packs immense goof and laughter in its manageable 100 minutes duration. In the film, Doug Billings, a responsible young man, heads to Las Vegas with his friends Phil and Stu and his future brother-in-law Alan to have a blast of a bachelor party. After some dilly-dallying, the men cut to the chase, and their partying goes out of control. Three guys wake up the following morning with a massive hangover to find Doug missing.

With this roadblock, Phil, Stu, and Alan scour Sin City in search of Doug. What happens in Vegas may not stay in Vegas after all. Bradley Cooper, Zach Galifianakis, Ed Helms, and Justin Bartha play central roles in this unfolding conundrum. You may wonder how much of the story is based on truth. If the question has indeed crossed your mind, let us investigate further.

Is The Hangover Based on a True Story?

‘The Hangover’ is partially based on a true story. If you have liked how the movie conjures comedy out of circumstances, you may find it more astounding to know that some of the events may have occurred in Las Vegas. Jon Lucas and Scott Moore came up with the spec script for the movie and sold it to Warner Bros. for over $2 million. Todd Philips of ‘Starsky and Hutch’ fame came onboard, allured by the enticing dynamism of the script. Screenwriter-producer Jeremy Garelick did some work on the final draft. However, he does not appear in the final list of credits. 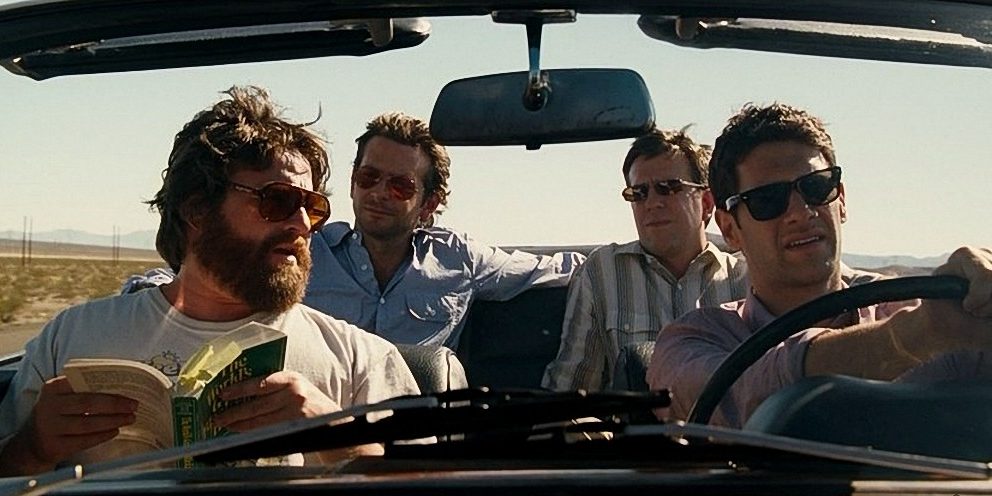 Garelick sprinkled the script with exciting plot points and over-the-top insertions, such as Mike Tyson and his tiger, the baby, and the police cruiser. Thus, the final movie took its beguiling form. However, you may be astonished to know that the story began its journey with producer Chris Bender of BenderSpink. He heard the story of how his producer friend Tripp Vinson (of ‘The Guardian’ fame) went AWOL from his own Bachelor Party in Las Vegas and thought of spinning it into a movie.

In 2002, Tripp was engaged to Adriana Alberghetti – the Endeavor motion picture lit agent. Some 30 people alongside Tripp lodged into Hard Rock Hotel and went out partying for the night. Their night’s revelry consisted of a series of parties across restaurants, bars, and strip clubs in Sin City. When everyone woke up in the morning hungover, Tripp was missing. He later recalled waking up at a strip club with a mammoth bill under his name. Well, this was enough to ignite the idea of a feature film in Bender’s mind.

Although, some aspects were different in the movie. Tripp Vinson’s bachelor party took place months before his wedding, not in the same week. Moreover, the group was quite big, as opposed to the four musketeers from the movie. In the movie, the friends stay at the iconic Caesar’s Palace in Las Vegas. And indeed several sequences were filmed at the famous hotel and casino. According to Celena Haas, who was the Vice President of Public Relations at the hotel when the filming was underway, the suite in the movie was modeled after two opulent suites at the establishment’s Forum Tower.

More importantly, one of the suites was inspired by the so-called ‘Rain Man’ suite, named after the classic film which Alan references on their way to Vegas. Moreover, Stu’s missing tooth was also quite natural. The crew did not have to use effects for the scene since Ed Helms did not have an adult incisor growth. He resorted to using fake incisors for most of his life, only to take it out when filming parts of the movie. However, taking into consideration all the details, it seems that the storyline has more truth than you would anticipate.