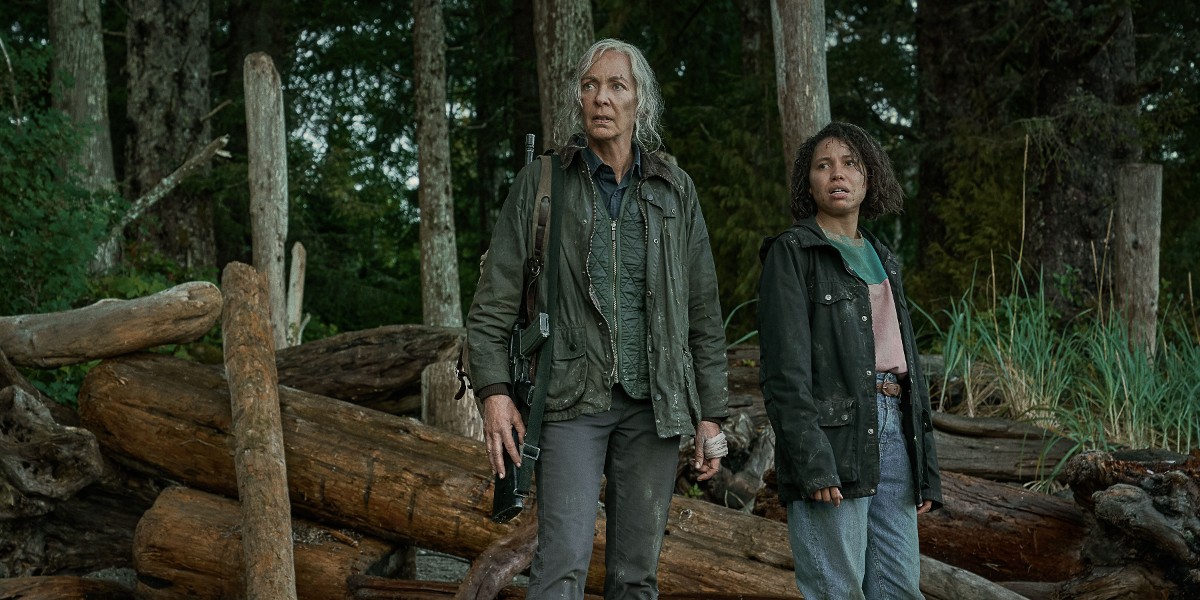 Netflix’s ‘Lou’ is an action thriller film directed by Anna Foerster (‘Westworld‘). It stars Allison Janney (‘Mom’) as Lou, a mysterious, lonely woman living in the woods who is forced into action after her neighbor, Hannah’s daughter, is kidnapped. The two women join forces to search for the missing young girl. However, in the process, dark secrets about Lou and Hannah’s past come to the fore, tying them together in an unexpected fashion. If you are looking for answers about the connection between Hannah and Lou and whether they succeed in their search mission, here is everything you need to know about the ending of ‘Lou.’ SPOILERS AHEAD!

‘Lou’ opens with the titular character, an aging woman who lives in the woods on a large estate. She rents a trailer park to a woman named Hannah. Lou’s dog, Jax, is her only companion, and she barely interacts with anyone in the town. After removing a box of documents buried in her yard, Lou prepares to hand over her estate and Jax’s responsibility to an unnamed person. A storm is approaching, and Hannah is forced to prepare for it. 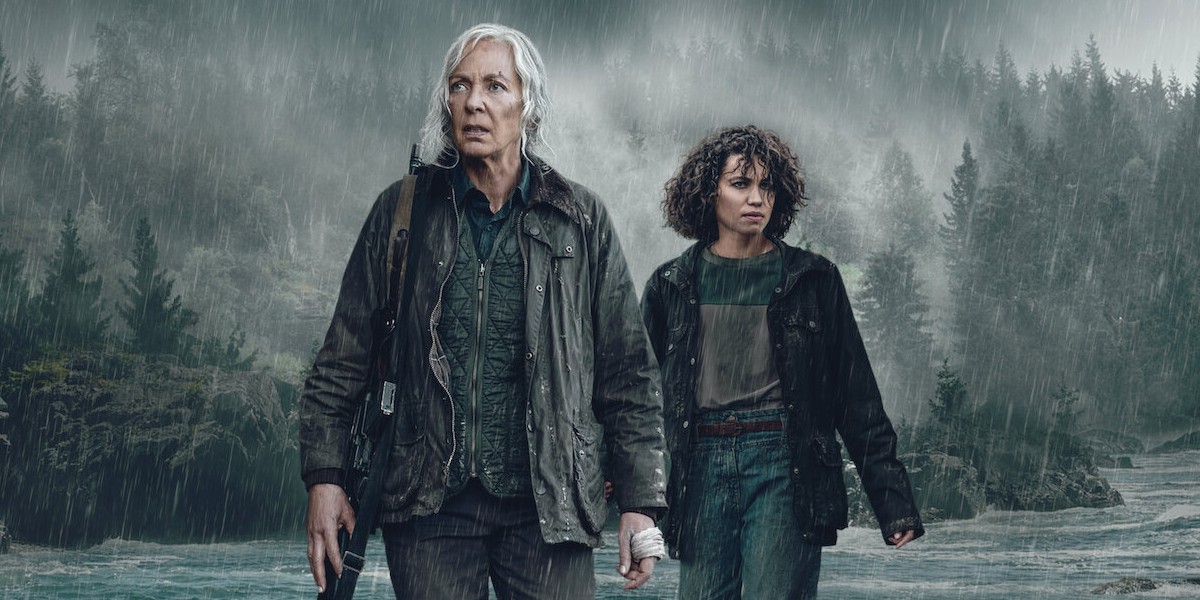 Meanwhile, her young daughter, Vee, is troubled because of her father’s absence. Hannah’s friend, Chris, checks in on the mother and daughter to ensure they have the supplies to survive the storm. On his road home, Chris is killed by a mysterious man who asks for a lift during the heavy rainfall. Soon, the man makes his way to Hannah’s home and distracts her. He uses the opportunity to kidnap Vee.

After Hannah learns that Chris is dead and Vee has been abducted, she finds a postcard. As a result, she deduces that her husband, Phillip, is behind the kidnapping. However, Hannah believes that Phillip has been dead for three months. Elsewhere, after leaving a message and burning the documents, Lou prepares to suicide. However, before pulling the trigger, Hannah arrives on her doorstep. Hannah reveals that Phillip has kidnapped Vee. With no radio or phone signals, the women fail to contact the sheriff for help.

Lou quickly gathers supplies and starts a hunt for Phillip and Vee. She plans to track down the kidnapper with the help of her dog, Jax, and her military skills. Soon, Lou reveals that she is an ex-CIA agent and was forced to flee the agency after a botched mission. Hence, she lives in hiding on the remote island. After Lou and Hannah encounter two of Phillip’s comrades, Lou is forced to fight and kill them. However, she learns that Phillip is taking Vee to a lighthouse on the island’s shore. Whether Lou and Hannah manage to find and save Vee forms the rest of the plot.

Lou Ending: Do Lou and Hannah Find Vee? Why Did Phillip Kidnap Her?

As the narrative progresses, viewers learn about the complicated relationship between Phillip and Hannah. Lou leads the search for Vee and tries to understand Phillip’s motivations, hoping it will provide her with clues. However, Lou is hiding her own dark secret. Hannah reveals that she married Phillip despite knowing that he is a troubled person. His mental issues spilled over in their marriage, and despite her best efforts, Hannah could not change his behavior. Therefore, Hannah was forced to flee from Phillip to protect herself and Vee from his abuse.

Soon, Lou and Hannah catch up with Phillip and Vee. Lou finds camping in a rocky region at night. As a result, she heads forward to confront Phillip without Hannah’s knowledge. Lou holds Phillip at gunpoint, and the duo finally address their tragic past. In the conversation, it is revealed that Lou is Phillip’s mother. When Lou was in the CIA, she was assigned to a mission in Iran. Phillip was born during the mission and was abducted by the people Lou was paying on. Lou chose to keep her cover instead of saving Phillip. Instead, she took the CIA’s help to extract Phillip from the goons.

Phillip was traumatized by the incident and harbored hatred toward his mother for abandoning him. Hence, it becomes evident that Phillip’s motivations behind abducting Vee are based on his tragic past. Before Lou can save Vee, Phillip stabs her with an axe. He flees with Vee and asks Lou to bring Hannah to the lighthouse. After Hannah catches up with Lou, she learns the truth about Phillip’s past. She realizes that Phillip left the postcards for Lou and has a vendetta against her. Moreover, Lou reveals that she orchestrated the events to bring Hannah and Vee to the island to protect them from Phillip.

The revelation that Phillip is Lou’s son is a game-changing twist that sets up a climactic battle between the two characters. Moreover, Hannah and Lou must find a way to save Vee from Phillip’s dangerous plan. Phillip hides inside a lighthouse with Vee and has rigged the place with a bomb. He wishes to erase his past trauma by destroying the entire lighthouse and killing his family in the process. However, before arriving at the lighthouse, Hannah contacts the sheriff and asks for his help.

Meanwhile, Lou manages to rig the remote to the bomb and averts the explosion. Hannah distracts Phillip and creates an opening for Vee to escape. As Phillip tries to attack Vee and Hannah, Lou intervenes and engages in a deadly duel with her son. The two fight near the shore, and Phillip brutally injures Lou. However, Lou manages to impale Phillip with a rod. The CIA arrives in a chopper as Phillip has revealed Lou’s location to them. The helicopter fires bullets at the mother and Son, and Phillip is killed in the gunfire. Lou and Phillip fall into the sea and are dragged away by the waves.

Ultimately, Lou sacrifices herself to protect her daughter-in-law and granddaughter. However, she realizes that her son is beyond saving and is forced to kill him. Earlier in a conversation, Lou stated that she knew about Phillip’s dark side. Hence, she was keeping a protective watch on Hannah and Vee by keeping them close to her. The final scenes reveal that Lou has decided to leave her house and Jax to Hannah. Lou was planning to die by suicide, but searching for Vee brought her closer to her family.

Lou finally makes peace with her past mistakes and dies a heroic death. However, in the final moments, viewers see Hannah and Vee aboard a ship as a watchful set of eyes observes them from a distance. Jax seemingly recognizes the person, implying that Lou is still alive. The CIA wants Lou as she possesses sensitive documents regarding the mission in Iran. Hence, her life is under threat. As a result, Lou faked her death to escape the agency’s grasp. Therefore, Lou is certainly not dead and continues to watch over Hannah and Vee. However, since her presence could endanger the mother and daughter’s life again, Lou decides to remain hidden. Nonetheless, she continues to be a silent guardian of her family.