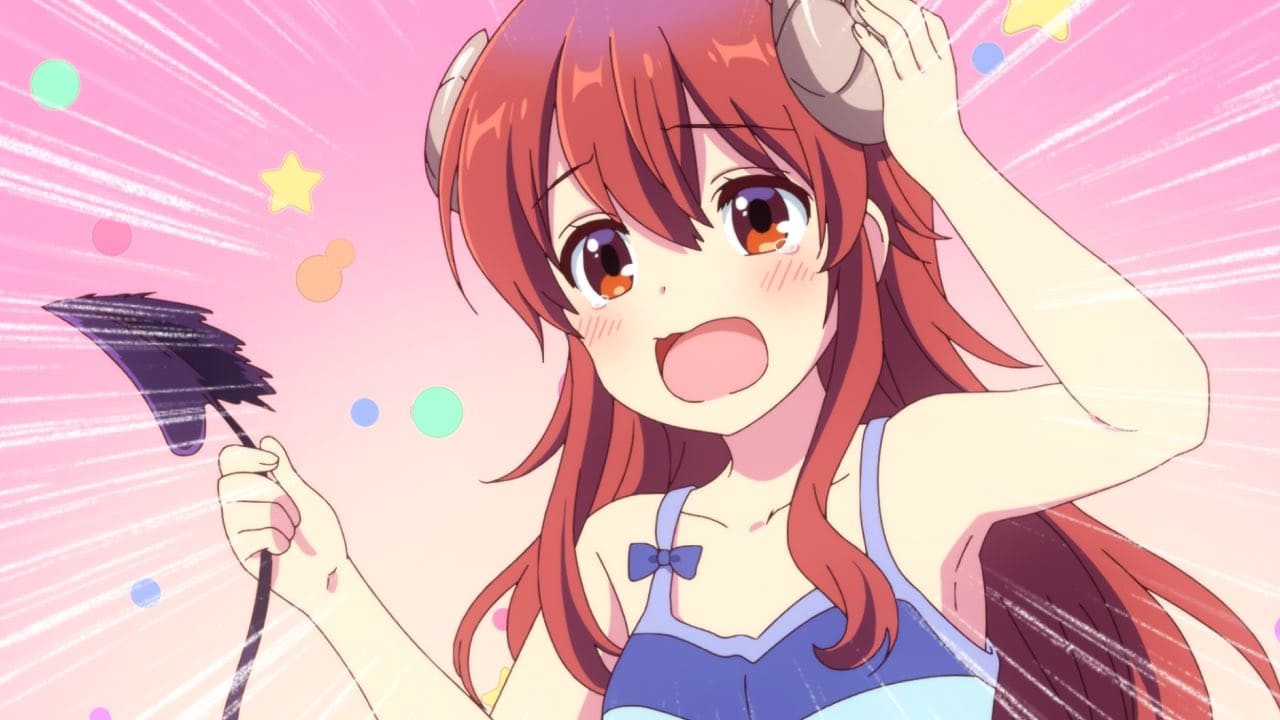 After ‘Dan Machi‘ Season 2, ‘Machikado Mazoku’ is easily the second-best J.C staff anime of the season. And though it does have a lot of typical anime tropes involving magical and demonic girls, it is good to see that at least one fantasy-comedy anime of the season does not fall into the Isekai category. Also, it has been a while since J.C Staff has strictly focused on slice-of-life comedies. It is certainly not the best studio out there for such shows, but it’s great that they’re returning to their roots.

When it comes to the characters of this show, it seems like they’re all driven by some vaguely mundane set of goals that all lead to the common message of being kind and not giving up when the odds are against you. The art style is perfect and fits in with its cute tone. Overall, there is nothing about ‘Machikado Mazoku’ that needs to be taken seriously, but even then, the anime somehow manages to entertain you with its simple storyline. Though it’s more suitable for kids, pretty much anyone can have a good time watching it.

Machikado Mazoku Season 2 Release Date: When will it premiere?

‘Machikado Mazoku’ Season 1 premiered on July 12, 2019 and with a total of 12 episodes, came to an end on September 27, 2019. If you have been following this anime all this while, then you’re probably wondering if you’ll get to see more of it in the future. Now if we compare it with the manga series it has been adapted from, its recent version was published on June 27, 2019. So for obvious reasons, this recent 5th volume of the manga will certainly not be a part of the first season of the anime series. This leaves the creators with at least one whole volume for creating a new season. But then, one volume of the manga will not be enough for a full-fledged season 2 and we can only expect one if the mangaka comes out with a few more volumes of it.

When it comes to the show’s popularity, so far, it has been accepted fairly well by most viewers and considering the rate at which it is getting popular, it seems like it will be able to reach its expected sales threshold. Though it is a bit too soon to say anything about the anime’s renewal, we expect ‘Machikado Mazoku’ Season 2 to release in July, 2020. As soon as we get any confirmed news regarding ‘Machikado Mazoku’, we will update it here in this section. Till then, you should certainly check out other similar slice-of-life anime shows.

An official English dub of ‘Machikado Mazoku’ is not available yet, but you can still stream it on HiDive with its original English audio and Japanese subtitles.

Yuuko Yoshida seems to have a very ordinary life but one day, all of this changes when her demonic abilities are awakened and she becomes the Shadow Mistress Yuuko. This is when her ancestor, Lilith, approaches her and assigns her the mission of defeating a magical girl who is the Light clan’s shrine maiden. Later, just to test her abilities, Yuuko decides to challenge another magical girl named Momo Chiyoda, but this does not go too well and she is easily defeated because of her lack of strength. After this event, Yuuko starts taking help from Momo quite regularly and even ends up stealing some of her powers when she is given the responsibility to sustain the peace of Tama City.

Yuuko Yoshida, known as Shadow Mistress Yuuko in her demonic form, is the main character of the series. She is a 15-year-old girl who wakes up one day and finds herself in a demonic form with a pair of horns growing out of her head. Her aim is to defeat the magical girl in town in order to break the spell that has been laid upon her family. Her overall physical strength and stamina suggest that she’s really weak compared to most other characters but she also possesses the unique ability to sneak into others’ dreams. In appearance, she is really cute and has long brown hair with hazel eyes.

Momo Chiyoda is a beautiful Maho Shojo (Magical Girl) who attends the same high school as Yuuko Yoshida. Everyone believes that she’s the weakest amongst all the magical girls but she is actually the strongest as she never really transforms to her true form. She is also into muscle training and her physical strength is a lot more than her rival Yuuko. Several people also claim that she had once saved the world. When it comes to her appearance, she has long pink hair and white skin. She has bright blue eyes and everything she wears is pink in color.

Read More in Anime Preview: Given | Ace of Diamond