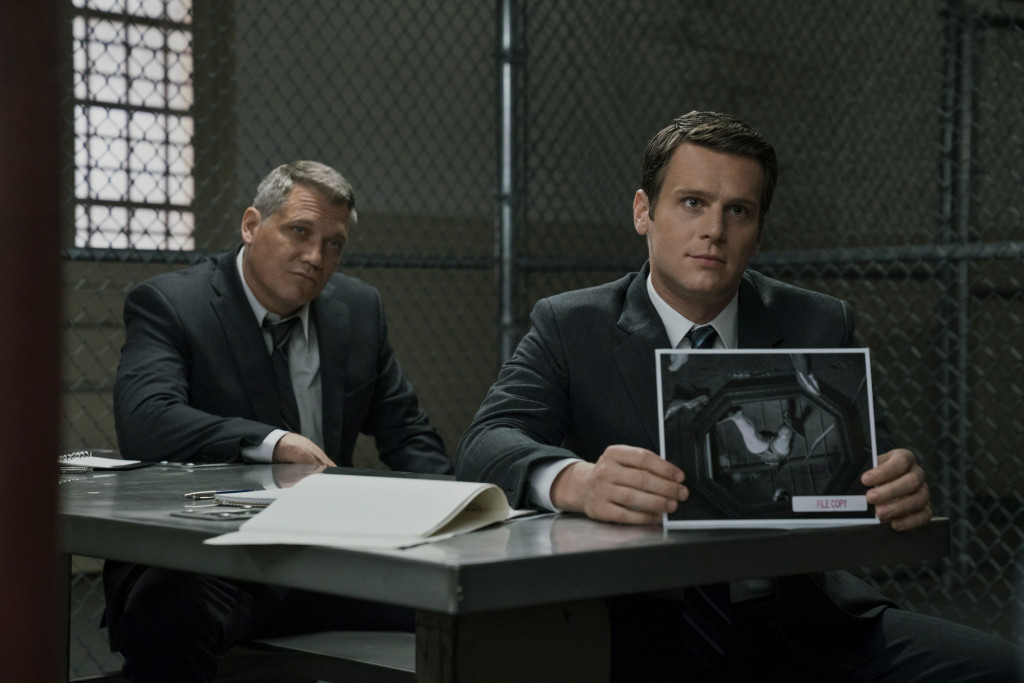 ‘Mindhunter’ Season 2 does not waste a lot of time in plunging us back into the darkness. The series is mindful of the fact that Season 1 premiered in 2017. Thus, when it picks up from where it left off, ‘Mindhunter’ gives us enough of a recap so that we are all caught up with what is going on in the Behavioural Science Unit of the FBI.

David Fincher returns as an executive producer and at the offset, ‘Mindhunter’ remains more like his ‘Zodiac‘ than ‘Se7en‘. Concerned primarily with the methodology used to capture repeat offenders, ‘Mindhunter’ once again promises to amaze us with the depravity of human nature and the monstrosity that lurks underneath it.

Much like the previous season of ‘Mindhunter’, the series decides to begin with the BTK killer, still identified as the ADT serviceman. We are offered closer glimpses into his mind as his quirks become increasingly evident and violent. The pre-credit scene of the first episode of Season 2 begins with the BTK killer crossdressing and attempting some form of auto-strangulation. Soon the scene shifts to focus on Bill Tench, who returns to work to find that Quantico is going through a change. It is under new leadership as his former boss, Shepard, is retiring. This spells good news for the BSU because the new boss is more inclined to embrace the progressive methods advocated by the unit. Meanwhile, we see Holden Ford struggle with his panic attack, which engulfed him in the finale of the first season. He is released from care but is warned about avoiding stress and is prescribed valium in order to help him cope.

Under new leadership, it seems as though things are about to get better. The new boss soon catches up with most of what has been going on at the Unit. He interviews both Tench and Wendy Carr, the psychology professor. Taking stock of their contributions, he is highly impressed and shrewdly tasks both of them to take care of Holden, to ensure that his inspired intuitions are harnessed to help capture criminals. The intention is to channel Holden’s intuitions to help the bureau instead of harming their cases.

If you remember season 1, Holden was shown to take increasingly unorthodox steps to connect with the psychopaths in prison. His downward spiral began in Season 1, and Season 2’s first episode shows some serious attempts going in so that he is brought back on track. When the boss meets with Holden as well, he is immediately taken in by the young agent’s intelligence and commitment to the job. The message is clear – if Holden and his team deliver results like convictions, then the boss is willing to give BSU enough resources so that it becomes the unit that people call first in case of murders, rather than the unit that solves cold cases.

Speaking of murders, first episode also quickly introduces the killers who will challenge the BSU like never before. The new boss already promises to arrange a meeting with Charles Manson, the most infamous killer of the 20th century, as Holden describes him. We also see how the BTK case makes its way to Tench’s desk and it will be a great test to see the BSU attempt to put theory to practice as they anticipate the notorious killer’s moves. While cases and killers are definitely on the minds of the BSU team, another sword that was hanging over their heads from Season 1 was an investigation by the Office of Professional Responsibility (OPR). With Holden’s shaky mental state, this investigation could have been potentially damning. However, the new boss puts a stop to the investigation in a welcome relief to FBI agents.

Nonetheless, all is not well by the end of the episode as Shepard has an outburst where he tells Holden that his retirement has been forced due to Holden’s irresponsibility in Season 1. This triggers another panic attack, and we have to wait and see if the Holden’s duties are affected by his condition because we are sure that bigger monsters than Ed Kemper are headed towards Holden and Tench in the upcoming episodes.

‘Mindhunter’ Season 2 Episode 1 is off to a strong start. Unlike Season 1, the characters seem more refined as they seem to be surer of where they are headed. Episode 1 has not wasted any time in introducing the inklings of the new cases that are going to be investigated. Moreover, the narrative has already hinted at a larger and more capable BSU than one in its nascent stages. We know that we will finally get to see our agents in action, anticipating and apprehending serial killers. However, with Holden’s panic attacks, there is a chance that our virtuoso might not be at his best in all cases. Performances have been solid from Jonathan Groff, Holt McCallany, Anna Torv, and Michael Cerveris. The new boss is definitely someone to keep an eye out for, since he comes across as friendly, but might spell trouble soon enough. Episode 1 of Season 2 is definitely well-paced and sets up the show excellently for future episodes.