Where is Moksha Bybee Now? 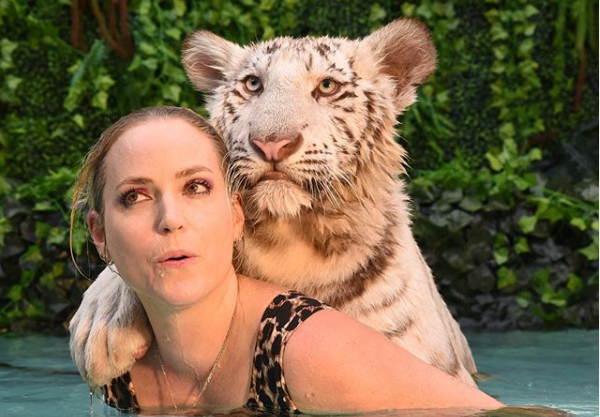 While Bhagavan ‘Doc’ Antle might not be at the center of Netflix’s ‘Tiger King‘, which tells us about Joe Exotic, there is no denying that he commands a lot of our attention. Firstly, all the big cat owners seem to look up to Antle, who’s been in the business for a long time. Moreover, he also appears to be Exotic’s mentor, and inspiration.

Apart from shining the light on Antle, ‘Tiger King’ has also insinuated that Antle has relations with his female ‘apprentices’. Many have stated, in the docuseries, that Antle has more than three wives or girlfriends. However, Antle has refuted said claims, stating that he’s single, and lives alone in his house, since the demise of his wife.

That said, one of Antle’s apprentices happens to enjoy quite a steady social media presence. We are talking about Moksha Bybee. Curious to know where she is today? We have got you covered in that regard.

Who is Moksha Bybee?

As per the T.I.G.E.R.S. site, Moksha Bybee is listed as the general manager. Having grown up in Utah, she has been surrounded by farm animals, and the vast outdoors. She’s been with the safari since 2001, which is corroborated by her Facebook account. It lists her moving to Myrtle Beach, South Carolina, in April 2001.

However, her account also states that she moved to Carver, Massachusetts, in November 2001. As per the website, Moksha has the loving moniker of “Monkey Mama”, as she raises all the baby apes and monkeys. She also appears to be an avid sportswoman and a top tour guide.

She is considered to be a professional liger expert. Moksha is one of the few people in the world, who have been successful in raising 3 to 4 generations of ligers to adulthood. Notably, she was formerly called Meredith, and 2020 marks her 19th year, working for Doc Antle. Her profile lists her as having moved to Miami on October 2, 2003. We also know that she traveled to Cancún, Quintana Roo, in 2013.

Moksha seems to have merged her work and her lifestyle. She’s been in the park, around exotic animals for ages. She spoke about this lifestyle, saying, “If you just work a couple hours and then leave the animals, they don’t see you as family. There’s a lot of tigers on the preserve that I’ve spent a lot of time with, but the ones I’ve spent the most time with, they know what my golf cart sounds like, they know what my footsteps sound like. They know I’m mom, I’m their life, I’m their freedom, I give them all the gifts.”

While animals, and her colleagues, seem to Moksha’s family at the moment, her Facebook profile lists Gail Stu Bensinger as a family member, also.

Where is Moksha Bybee Now?

Moksha is still a part of Antle’s park and happens to enjoy a strong fan following on Instagram. She also has Pinterest and TikTok accounts, that you can check out. Notably, Moksha seems to be much more popular on TikTok, having amassed 3.9 million followers. You can check out her most recent post below.

Speaking of being considered as a ‘mom’ by the animals, you can check out a recent picture by Moksha, where she’s with The Undertaker, feeding a lioness.