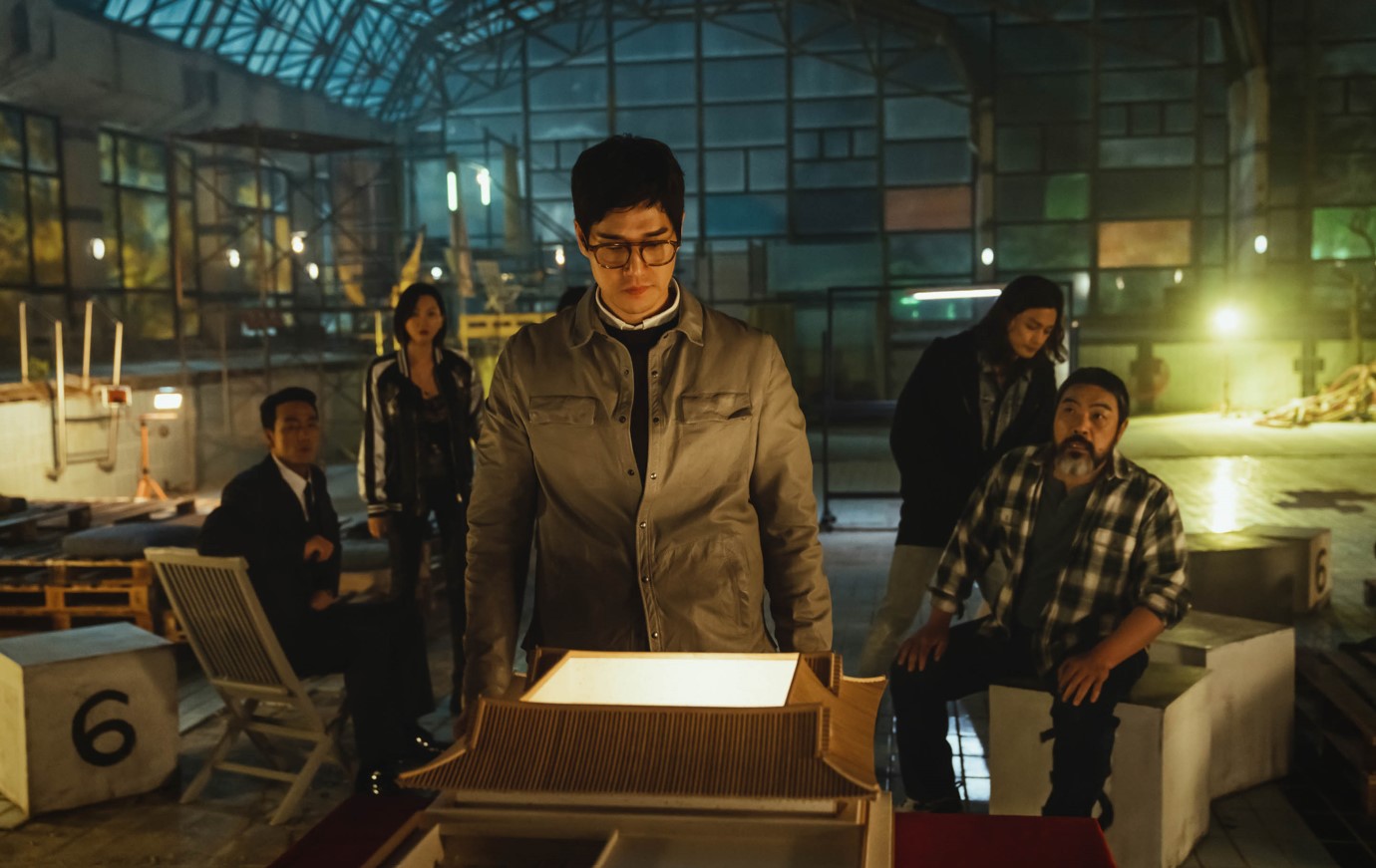 The Spanish series ‘Money Heist’ is one of the earliest global hits for Netflix, putting both the streaming platform and its entertainment model on everyone’s map. The show has everything viewers can ask from a heist action thriller series — from exhilarating action sequences and setting, gripping drama and romance, and a fantastic group of characters. The original show is undeniably Spanish, but that’s what makes it a perfect candidate for adaptations. ‘Money Heist: Korea – Joint Economic Area’ takes the bones of the original series and adds the blood and flesh of the Korean setting.

In part 1 of the adaptation, the story is set in a world where North and South Korea are undergoing reunification. A resourceful group of robbers, led by the brilliant Professor (Yoo Ji-Tae), decides to steal 4 trillion Won from the Unified Korea Mint, the newly established institution meant to print notes for both countries. In part 2, the heist continues as the robbers, and the police try to outmaneuver each other in a game of cat and mouse. While most think that the robbers are after money, the history of their leaders tells a different story. Here is everything you need to know about the ending of ‘Money Heist: Korea – Joint Economic Area’ Part 2. SPOILERS AHEAD.

In the world of ‘Money Heist: Korea,’ the former Joint Security Area, situated between the two countries and the symbol of division and violence, has been transformed into the Joint Economic Area. The Unified Korea Mint is located there. The politicians of both countries promised that reunification would bring prosperity to everyone. Almost predictably, that didn’t happen. Everyone among the robbers, with the exception of Rio (Lee Hyun-woo), is a victim of the system.

Episode 7 begins pretty much where episode 6 ends. We learn a bit more about the past of Captain Cha Moohyuk (Kim Sung-oh), an officer from North Korea’s Ministry of Security and part of the task force set up to deal with the robbers. He came to know about the upcoming reunification from a double agent but didn’t believe it at the time. Cut to the present day, and his suspicion leads him to the Professor’s doorstep. The man in question realizes that he has been found out and drugs Moohyuk before taking him to their hideout and handcuffing him to a set of pipes. At the Task Force command tent, the other officers start to believe that Moohyuk is part of the heist, but Seon Woojin (Yunjin Kim) remains skeptical.

Inside the Mint, the work continues despite the mounting tension. However, things suddenly turn for the worse when Kim Sangman, Woojin’s abusive former husband and an influential South Korean politician, declares immunity for anyone in the crew willing to reach out. His plan works, and someone does reach out and accepts the task of taking out Anne, the daughter of the American ambassador. If she dies, the authorities can storm the Mint without any outside influence stopping them. The robbers know this well, and that’s why they take extra measures to keep Anne alive and inside the Mint.

On Woojin’s instruction, the power supply to the Mint is severed, and the communication between the Professor and those inside the Mint breaks. The group discovers Nairobi is the traitor because of Berlin’s clever ploy. She reveals that she did this because Sangman has her son. To re-establish communication with the Professor and rescue Nairobi’s son, Tokyo lets herself get arrested by the authorities before escaping with the help of Seoul, an original character in the Korean series. Seoul has been together with Berlin since his days at the concentration camp.

As the season progresses, it is revealed that the Professor and Berlin are siblings, just like in the original show. In the finale, the robbers manage to get the money they have printed out of the Mint and win over public opinion.

Money Heist: Korea Part 2 Ending: What Do the Robbers Do with the Money?

The four trillion Won that the robbers print was already meant to be printed. The Third Summit organized between North and South Korea was meant to serve as the front as that money was supposed to be used to rescue business conglomerate companies that invested in North Korea under the pretext of economic cooperation.

The Professor and his crew keep most of the money. They escape the Mint through the only remaining tunnel the North Korean defectors used. After coming out of the tunnels, they use trucks to reach Kaesong, a North Korean city near the Joint Economic Area. From there, they take a train to the Russian city of Khabarovsk before going their separate ways.

The robbers give three billion Won to every hostage who willingly helps them in the end. They also scatter 0.3 billion Won over Pyeonghwa Square. Some of that is taken home by the members of the public there. The rest is examined, and their serial numbers reveal that they were indeed meant to be used for bailing out companies.

Toward the end of the season, Woojin follows the postcard that the Professor left her and arrives at what looks like Kherson, a city in Ukraine, where she reunites with her lover.

Why Does the Professor Organize the Heist?

In part 2, the Professor’s past is revealed in its entirety. He is originally from North Korea. His father used to work for the government and had the job of shutting down the tunnels that asylum seekers used to come to the South. Berlin or Song Jung-ho was diagnosed with Huntington’s disease when he was young, and the family tried to come to South Korea for his treatment. However, the regime found out about it, and Berlin and the Professor’s mother was killed. Berlin was captured and sent to the concentration camp.

Berlin and the Professor’s father was killed while trying to rob a bank to get his son out of the camp. The brothers reunited years later and planned the heist. The Professor or Park Sunho was an educator whose research into the economic impacts of reunification garnered him the interest of influential people on both sides of the border, including Sangman, who introduced him to Oh Jaeyun, a powerful South Korean businessman. It was the Professor’s plan and Oh Jaeyun’s capital that resulted in North Korea’s open-door economic policy.

So, the Professor knew the capitalists’ plan with the Joint Economic Area; he created it for them. Having grown up witnessing the worst of both systems, the Professor uses the heist to expose some of the most terrible people in the government. Jeon Yongsu, the North Korean representative who used to be the head of the very concentration camp where Berlin was kept, goes missing by the end of the season. It’s safe to assume that the regime killed him for his failure. Meanwhile, Sangman and Jaeyun face an investigation. The former will never become the Prime Minister, which had always been his aspiration, and probably will lose the custody battle with his estranged wife.

Do Oslo, Moscow, and Berlin Die?

In the original Spanish series, Oslo, Moscow, and Berlin are killed during the Royal Mint heist. The Korean version goes about it, albeit differently. Oslo is killed while trying to deliver water to a group of hostages. Park Chulwoo, a member of the North Korean military special operations unit, who was originally sent in to infiltrate the Mint, kills Oslo by hitting him with a stick.

Moscow gets injured while trying to bring Tokyo back into the Mint and later succumbs to his own injuries. Before his death, he comes to peace with Denver and Stockholm’s relationship. Unlike the other two characters and his counterpart in the original series, Berlin manages to get out of the Mint alive with Seoul.

After the tunnel collapses, both the authorities and the robbers deduce that Berlin is dead. As the Professor mourns his brother, he discovers the secret tunnel marked on the back of his childhood drawing and realizes that his father did it.

The Professor manages to escape with his team and the money. Meanwhile, Berlin and Seoul get out of the tunnel and assimilate into the crowd while wearing their masks. Berlin later calls his brother to let him know that he is alright. He still has an incurable condition and is slowly dying. But, for now, he lives and can make the best of his remaining days on Earth.

Read More: Is Money Heist Korea Based on a True Story?