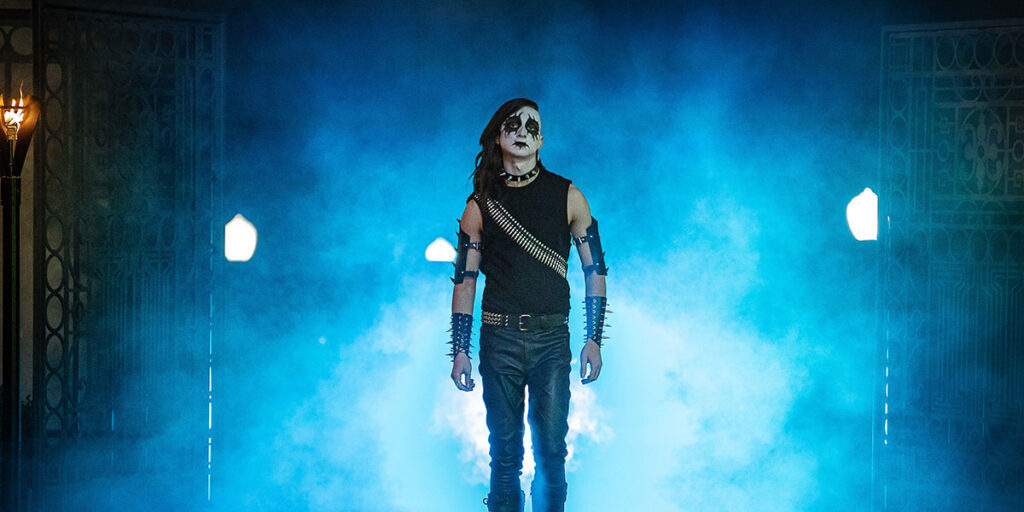 Directed by Peter Sollett, ‘Metal Lords‘ is a comedy-drama movie that follows two high school students — Hunter and Kevin — who dream of winning the Battle of the Bands competition. In order to form their heavy metal band, they search for a bassist in school, only in vain. When they stumble upon Emily, an excellent cello player, they decide to form their band with the cello player instead.

The film portrays several aspects of life that high students tend to go through while introducing a competitive theme to make the narrative even richer in drama. This inspirational blend of high-school life and the competitive spirit is much appreciated and enjoyed by viewers, especially those who love music. If you enjoyed watching the Peter Sollett directorial, you are likely to be interested in the films we have listed. You can watch most of these movies like ‘Metal Lords’ on Netflix, Amazon Prime, or Hulu.

‘Garage Days’ is an Australian comedy-drama film helmed by director Alex Proyas. It follows a Sydney-based band trying to make a name for themselves in the competitive world of rock music. When their first gig does not go as planned, the lead singer goes in search of the most successful rock manager in Australia. In the meantime, the rest of the members go through several issues that could break them apart. ‘Garage Band’ involves a band that goes through various ups and downs as they try to reach their goals, which can be compared to the complications three friends go through in ‘Metal Lords.’

Featuring Rainn Wilson, ‘The Rocker’ is a comedy film set in the 1980s. Directed by Peter Cattaneo, the narrative revolves around Robert Fishman, who gets kicked out of his rock band. After a couple of decades, he is given another shot at making a name for himself when his nephew asks him to be the drummer for his high-school rock band. Much like ‘Metal Lords,’ ‘The Rocker’ revolves around a high-school band getting energized after a new member gets involved.

Directed by Kenny Ortega, ‘High School Musical’ is a comedy-drama film that centers upon Troy and Gabriella, who couldn’t be more different. Nevertheless, they decide to participate in the school’s musical production. Being an integral part of the school basketball team, Troy juggles two things at once while he continues to work alongside Gabriella. As they spend more time together, the duo’s world turns upside down. The theme of different personalities being brought together by music is what links ‘High School Musical’ to ‘Metal Lords.’ Also, the genre and overall tone of the movies are quite similar.

Based on Coco Moodysson’s graphic novel titled ‘Never Goodnight,’ ‘We Are The Best’ or ‘Vi är bäst!’ is a Swedish musical drama film set in 1980s Stockholm. It follows three girls who decide to form a punk band despite the challenges they face. With each of them sharing the same taste in music, they get their hands on musical instruments for the first time.

What starts as a casual idea becomes something real as they aim for the stars, disregarding what others have to say about them. Both ‘We Are The Best’ and ‘Metal Lords’ incorporate humor in their dramatic narrative, keeping the viewers entertained. Not only that, both movies involve a band of three that is keen on proving people wrong.

The Todd Graff directorial ‘Bandslam’ revolves around the bond that Will and Charlotte share through their similar tastes in music. With the competition named Bandslam soon approaching, they decide to form a band by assembling other like-minded students to participate with them. Much like ‘Metal Lords,’ ‘Bandslam’ involves two high school friends looking to form a band in order to participate in a battle of the bands competition. Moreover, both movies depict the friendships and challenges the high school experience usually comes with.

With Jason Moore at the helm, ‘Pitch Perfect‘ is loosely based on the non-fiction book ‘Pitch Perfect: The Quest for Collegiate a Cappella Glory’ by Mickey Rapkin. The narrative follows a freshman named Beca at Barden University, who joins the all-girl singing group The Bellas. Just like Emily in ‘Metal Lords,’ Beca breathes new life into her singing group as they prepare to compete against their male rivals in an upcoming singing competition. Moreover, the theme of competitiveness also makes the film quite similar to the metal music-themed high school movie.

‘School of Rock‘ is a comedy film directed by Richard Linklater. It revolves around Dewey Finn, who gets kicked out of his band and becomes a substitute teacher at an elementary school without any qualifications. Soon after discovering his students’ musical talents, he works on forming a band with them in the hopes of participating in and winning the upcoming Battle of the Bands competition. Much like ‘Metal Lords,’ the narrative of this film leads up to the highly anticipated competition as the protagonists do their best to win it, albeit for their own interests.