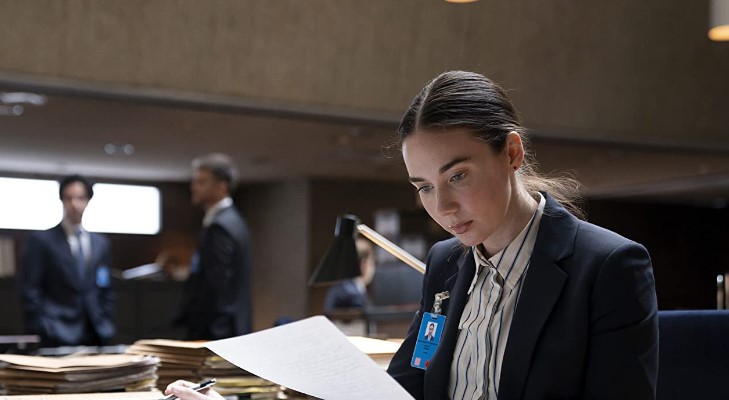 ‘National Treasure: Edge of History’ is part of the ‘National Treasure’ franchise. It focuses on a newer generation of treasure hunters than the original films. In episode 7, titled ‘Point of No Return,’ Jess (Lisette Olivera) travels to Mexico with her friends after learning that the third and final box can be there and gets the surprise of her life when she goes to meet Diego Salazar the man she believes killed her father. Meanwhile, Agent Ross (Lyndon Smith) faces pressure to catch Jess and close her case, while Myles decides to come clean to Liam (Jake Austin Walker). Here is everything you might want to know about the ending of ‘National Treasure: Edge of History’ episode 7. SPOILERS AHEAD.

The episode begins with Ross at the FBI Baton Rouge office. Ross plays the audio that Myles delivered, proving that Jess had an argument with Peter Sadusky (Harvey Keitel) before poisoning him. Having met Jess, she has difficulty believing that the other woman is capable of cold-blooded murder. Unfortunately, her boss mistakes her doubts about Jess’ criminality as a lack of self-confidence and encourages her to arrest Jess. Elsewhere, Jess and her friends prepare to go to Mexico, fully knowing if they get caught, Jess will not be able to return to the US. Ethan (Jordan Rodrigues) visits her and tells her about what happened to Liam. The realization that Liam could have died leaves Jess shocked. She tries to stop Tasha (Zuri Reed) and Oren (Antonio Cipriano) from coming with her to Mexico, but they don’t listen.

Meanwhile, Liam finds out that his performance at Graceland has become viral. People have discovered that he performs at the bar where he and Jess work and have gathered in droves. Initially reluctant to perform, Liam sings a song he made for Jess. However, when he sees Myles in the crowd, his memories of the attacks start coming back to him. He confronts the man, only to realize that Myles is the one who saved him from drowning in the river.

In Texas, Billie (Catherine Zeta-Jones) grows impatient, knowing Jess has played her. She is still in police custody and notices the era-perfect attire on one of the reenactors. Correctly deducing that the woman at least has to be a history enthusiast with a special interest in Alamo, Billie approaches her, and she is proven correct. But the woman states that there is no other well at the Alamo besides the one Billie has found, but later adds Alamo was named after a town in Mexico by some soldiers of that country.

Jess deduces that the best option for her and her friends is to speak to Salazar and even threaten him that she will inform Billie, whose brother Salazar killed, about his whereabouts. However, when she visits the prison to speak to the man who has been there for about two decades, the said man claims that he is her father, Rafael. Jess soon realizes that the man is obsessed with the treasure. He reveals that he has been to Viesca (formerly known as Alamo) but found nothing. With the clues he gives her, Jess deduces that the final box is at the University of the Cloister of Sor Juana, formerly the convent that was the home of a 17th-century nun named Sor Juana. The last box is found inside the piano that originally belonged to the nun.

However, Jess and her friends encounter a new problem at this point. Although they now have all the boxes, they don’t know how to read the map. Ethan points out that Jess’ father probably can do this, prompting a reluctant Jess to visit him. However, she notices Billie is there before she can meet him again. Realizing that there is a possibility Billie will kill her father, Jess plans to break him out of prison.

The show wants us to believe that the prisoner Jess meets in the Mexican jail is Jess’ father, Rafael, at least for now. Indeed, he seems to know certain things only a person with intimate knowledge about Jess’ family would know. But the confusion arises because the character has been recast and that rarely happens in modern films and TV shows while depicting the adult version of the same character only 20 years apart. In the pilot and the video footage Jess sees of her parents, Rafael is played by Alejandro Edda, but in this episode, Jacob Vargas portrays the character. When Billie comes to visit, she doesn’t necessarily recognize the prisoner as Rafael but simply remarks that he is back from the dead.

Despite all this, it is possible that the prisoner is indeed Rafael. He has been alive all this time but chose to be away from his family because of his obsession with the treasure. He knew he was arrested because the Mexican authorities thought he was Salazar but did not say anything to protect the treasure and his family.

It is safe to assume that Jess didn’t kill Sadusky. Myles had the opportunity, but it seems that his job was only to keep an eye on Sadusky and deliver the deepfake recording they made of Jess, implicating her in the murder. Ethan sees through this when he hears the recording for the first time and deduces that the woman’s voice in the recording belongs to Billie. This also makes Billie the biggest suspect in the murder. She has shown time and again that she is capable of violence to get the things she wants. After Sadusky gave Jess the letter and triggered the treasure hunt, Billie didn’t need him alive anymore, so she had him killed.

Read More: Is National Treasure Edge of History Based on a True Story?