Paper Girls Season 1 Ending, Explained: Where Do Tiffany and Erin End Up? 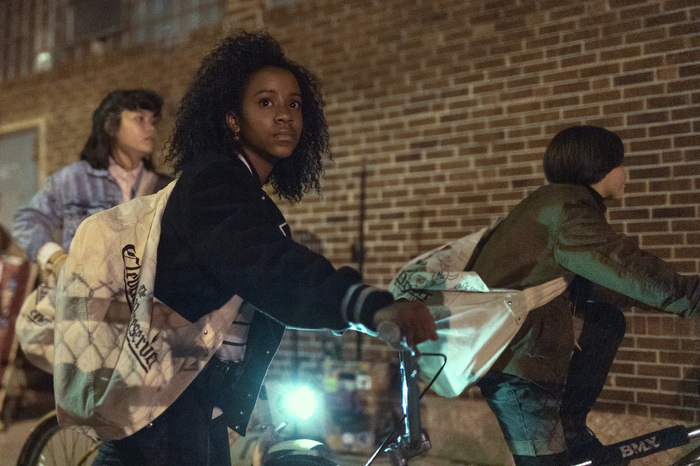 Amazon Prime’s ‘Paper Girls’ is a time travel story that has four twelve-year-old girls at its center. It offers a fresh twist on a genre that gives the opportunity to concoct complex storylines that are bound to leave the audience confused. The show benefits from the perspective of four young girls and creates a space for the exploration of identity, especially in contrast with their future versions. The story also allows a wider range of time travel, of which the first season only scratches the surface. The ending promises the audience a greater jump in time in the second season, leaving us wondering what it means for the protagonists. Here we’ve analyzed the ending to understand where the show might go from there. SPOILERS AHEAD

Tiffany, Erin, Mac, and KJ are twelve-year-old girls who are on their paper route in the early hours of Hell Day, i.e., November 1 of the year 1988. A strange encounter leads them to meet two time travelers and they end up in the year 2019. They meet the older version of Erin who has no memory of ever traveling in time. While she has no idea what’s happening, she helps the girls to figure out their situation and help them get back home. This leads them to Larry, who works for STF, a secret organization that is trying to reset the timeline. They are up against the Old Watch, who does everything in its power to keep things as they are supposed to be.

In trying to get back to 1988, the girls end up in 1999. This is where they discover more about their futures as well as time travel. In the end, the story comes full circle as they discover that chronology has nothing to do with anything. All the events have already happened; they are just living them now. Eventually, they are caught by the Old Watch, and they come face to face with Prioress, who’d been hunting them all this time. The leader of the Old Watch, the Grandfather, promises to send them back to 1988, but their memories will be wiped. At first, the idea seems good to the girls, but when they discover that Mac is going to die of cancer in 1992, they decide to exercise their freedom of choice.

An unexpected ally emerges in the form of Prioress who not only rescues them from the Old Watch but also sends them to the future, where they have a greater chance of curing Mac’s cancer. However, things take a concerning turn when the soldiers of the Old Watch show up and the girls are separated, with Tiffany and Erin ending up somewhere in the past, and Mac and KJ meeting an unknown fate.

Paper Girls Season 1 Ending: Where Do Tiffany and Erin End Up? 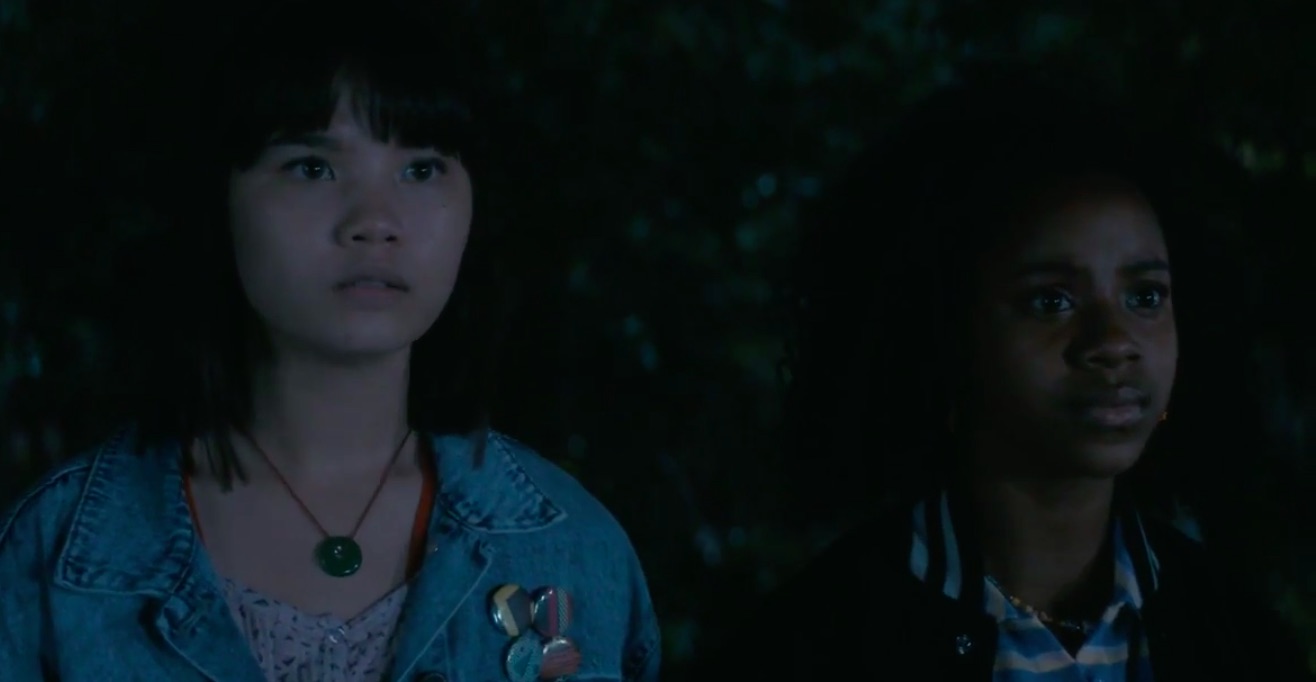 The war for the timeline has been going on between the Old Watch and STF for a very long time. Time traveling has turned it into an ongoing mess where the past, present, and future are so mixed up that it is impossible to tell where the next battle is going to take place. Prioress has been witness to this for a very long time. She wanted to change things by taking an aggressive stance against STF, but the Grandfather didn’t agree with her methods.

When she meets young Tiffany Quilkin, she realizes she has the chance to change things without actually causing any violence. Her intention is to send young Tiffany to the future so that she can convince older Tiffany to stop Dr. Joan Braunstein from creating the war that’ll wage from the beginning till the end of time. However, her plan goes awry when the soldiers try to stop her. She sends Mac and KJ to the future, but Tiffany and Erin end up in an entirely different place.

As they emerge from the corn field, Tiffany and Erin find themselves at a drive-in theatre. The look of the era and the movie on the screen suggest that they are somewhere in the late 50s or early 60s. This means that Prioress’s wish to change things is not going to happen. In fact, when the Grandfather sees where the girls have gone, he doesn’t seem worried at all. Rather, he is disappointed in Prioress for thinking that she could change the future. It looks like she has inadvertently set Tiffany on the very path she didn’t want her to take.

What Happens to Mac and KJ?

While we get an inkling of where Tiffany and Erin are, we don’t get a glimpse into the destination of Mac and KJ. Prioress tried to send all four of them to the future where they would encourage older Tiffany to make different choices and end the war or make it so that it never actually begins. However, with the Old Watch soldiers attacking them, the girls are separated when Mac and KJ enter the ship but Tiffany and Erin are left behind. So, where did Mac and KJ end up? Somewhere in the future. How far ahead in the future is yet to be seen.

According to the comics, the girls get to travel far and beyond in past as well as the future. In the first season, they go only as far as 2019. However, the second season will surely take it up a few notches. In the comics, as they are scattered across time, the twenty-second century acts as a host for a couple of their storylines. There is a good chance that Prioress sent Mac and KJ to 2019, or in some year in close vicinity. She’d wanted the girls to get older Tiffany to change her mind about time travel, leading her to not join Dr. Braunstein and not form the Quilkin institute, which exists in 2019.

However, ending up in the 2020s or so seems less likely for Mac and KJ because Prioress also promised to help Mac get a cure for cancer. In 2019, Mac’s brother, who is an accomplished doctor, says he’ll try to save her but there is no guarantee because there isn’t a proper cure yet. This means that Mac will have to go a little farther, say the 2100s. This era seems better suited also because older Tiffany will have a better knowledge of time travel (possibly having time traveled herself), and she’ll be in a better position to help the girls and end the war.

If you have seen even a single time travel story before, you must know that it only takes a timeline to change one person from a hero to a villain. The person who is trying to save the world in their young years might be the exact person trying to end it when they get older, much like what happens in ‘Dark’ and ‘Predestination’. This complicated web of past, present, and future leads the intentions and the nature of every character to become uncertain. The same thing seems to be happening with Tiffany.

After being torn out of her 1988 timeline, the twelve-year-old girl tries to find ways to go back home and live the life she was supposed to. When she meets her 1999 version, she realizes that the future looks a little different from what she’d expected. Her plan as a preteen was to work hard and get into MIT. This was what she wanted more than anything. But in 1999, what she wanted turned out to be different. She dropped out of MIT and started living a life that didn’t seem to be anything like what she’d wanted when she was twelve.

In 2019, Tiffany reads up a little about her life and discovers that she runs The Quilkin Institute. Before she can find out more about it, she and her friends are forced to run and they end up in 1999. It is when Prioress tells her that she will join forces with Dr. Braunstein that she realizes what the institute was for. Prioress wants her to change that, but it is already too late because the seeds have already been sown for the future Tiffany to invent time travel.

Before the Old Watch catches her, young Tiffany leaves behind Larry’s diary, in which he has written the coordinates of all the foldings that allow the window for time travel. She knows that the 1999 Tiffany is going to have her memory wiped and she won’t remember anything about her younger version visiting her. However, she also knows that the Old Watch doesn’t alter the objects that have been touched by time travelers. So, she leaves a message on the diary, “you invent time travel” and gives it to her older version, who is scared of forgetting the coolest thing that has happened to her. Young Tiffany believes the diary will help her figure out time travel and make something great out of her life, which is what she’d always wanted.

So, when 1999 Tiffany is returned to her time after the memory wiping is done, she will discover the strange diary in her car, which will lead her to decrypt Larry’s codes and figure out the location of the foldings. Because she won’t remember anything about STF or the Old Watch, she will try to find others who are trying to figure out time travel, which will eventually lead her to Dr. Braunstein and her team, landing her exactly where Prioress didn’t want her to be.

Read More: When and Where Does Paper Girls Take Place?