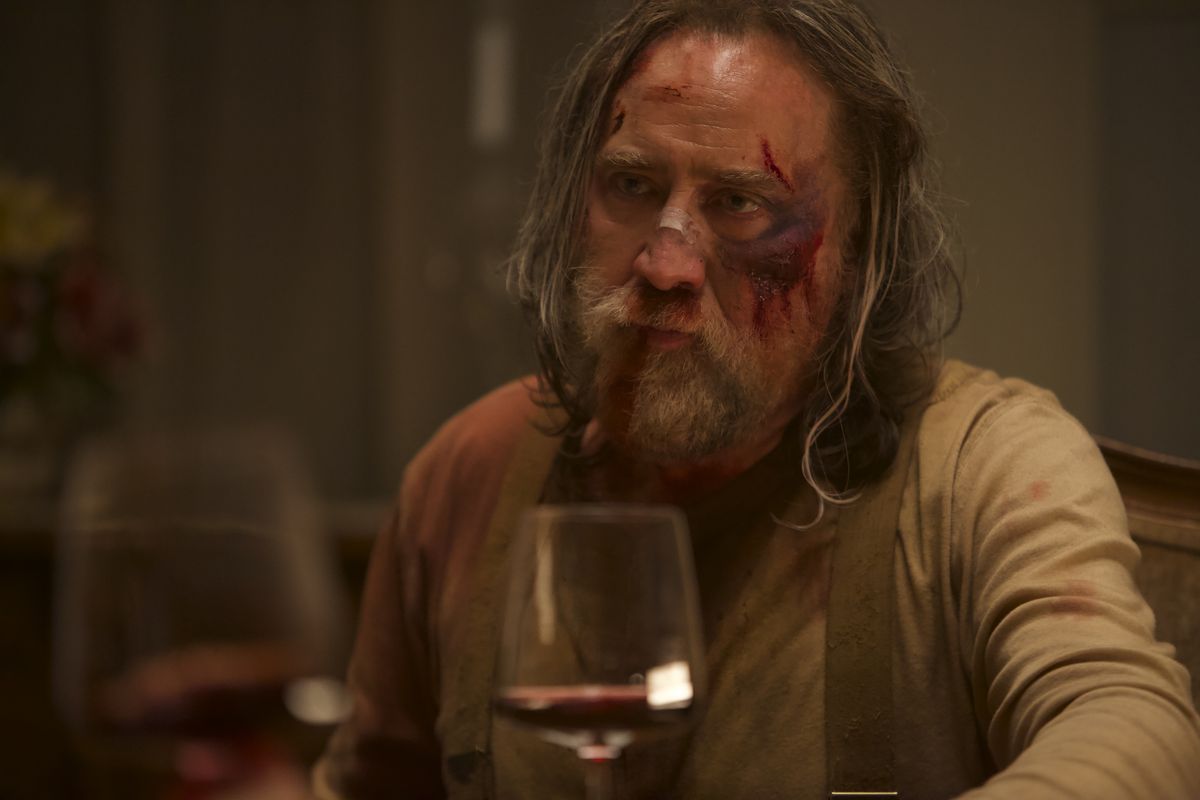 You may have seen Gordon Ramsay yelling at terrible chefs and Marco Pierre White intimidating people through his silence. Still, if you haven’t seen Robin Feld digging through a deconstructed scallop with a ruthless finger, you haven’t seen enough. Written and directed by Michael Sarnoski in his feature debut, the culinary chronicle ‘Pig’ is, above all, a relentless celebration of incessant life. Who would have thought the premise of a fabled loner finding his treasured pig to be such a tear-jerker? But as it happens, Nicolas Cage’s modern-day saint Robin Feld comes to town searching for his titular stolen truffle pig and returns stealing a million hearts. Watching the movie is a humbling exercise, indeed.

The acclaimed star of ‘Adaptation’ and ‘Ghost Rider’ reminds us once again of his evocative on-screen presence as he delivers the performance of a lifetime as the half-forgotten legendary chef Robin Feld. Dialogues are scarce, the camerawork is marked by serene ebullience, and the original score brings out heartache in the raw and mundane. If you reflect upon the experience of this visual ballad, the symphony will linger quite long. But some questions may bug you as well. If you are looking for answers, let us decode the denouement. SPOILERS AHEAD.

The story is told in three chapters: ‘Rustic Mushroom Tart,’ ‘Mom’s French Toast and Deconstructed Scallops,’ and ‘A Bird, a Bottle, and a Salted Baguette.’ In the first chapter, recluse truffle hunter Robin Feld lives with his only companion, a truffle pig, in a dilapidated hut amidst foggy and moist Oregon forests. His only contact with the external world is his young and arrogant buyer Amir, who sells the truffles to big restaurants in the faraway city. As the burden of a bitter past presses heavy on his heart, a stoic Robin rarely leaves the cocoon of his memory. 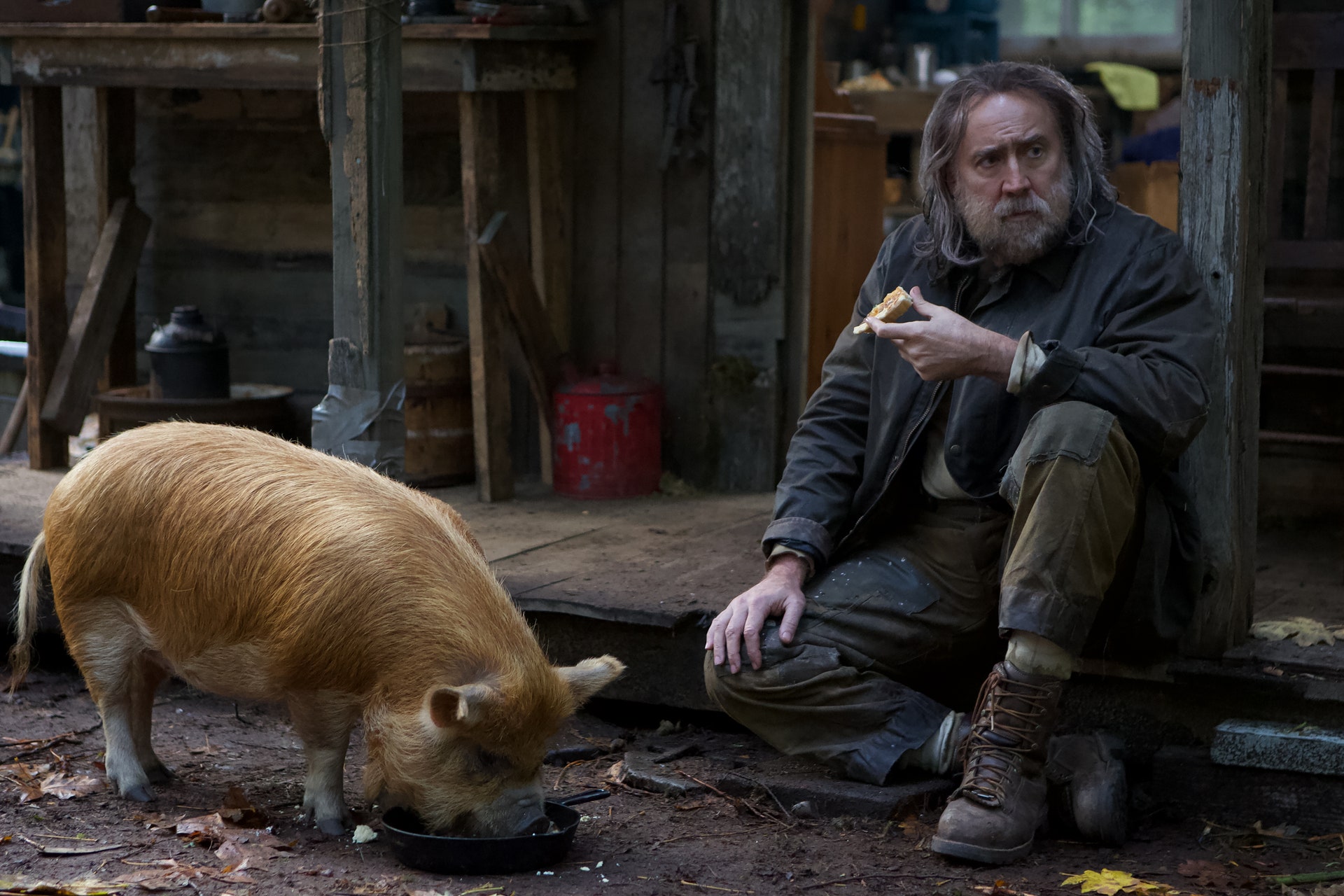 But one day, his carefully cultivated hermit life comes at an impasse as a group of vandals led by Tweaker and Tweakette steal his beloved pig, which takes us to the second chapter. With some assistance from Mac, Robin knows that a city man from Portland has bought his hog. Robin manages to convince Amir to lend him a ride, and together, they embark upon the journey of a lifetime that would finally make Robin confront his early legacy. And as it turns out in the third chapter, he has not lost his touch even a bit and can still move people to tears with his culinary magic.

Pig Ending: Why Did Robin Choose a Hermit’s Life?

Robin is a postmodern hero who lives in the ruins of his memory. The three chapters show us the hero’s invocation, return, and final loss. The loss is that of the other and thus of the animistic self itself. The dingy hotel basements are also placed in sharp contrast to the early vast wilderness. Off the bat, Robin Feld does not come off as something more than a feral loner. But the movie later reveals that under the meager disguise lies a prophetic soul. While on their quest to find the grunter, Amir takes Robin for a deranged person initially.

In the course of the journey, Amir comes to know the real identity of Robin. The knowledge, in turn, also impacts Amir’s personal life. After they arrive in Portland, Robin meets Edgar, who regrets Robin’s sudden disappearance from the scene. Edgar, we come to know, is quite an influential person in the restaurant circle. What Amir does not understand is how a forest tramp is so familiar with the big-time industry runner. But two and two add up when Robin takes Amir to Edgar’s underground torture club under the Pioneer Square, where once stood the Portland Hotel.

Amir is confused and infuriated at the hotel’s name since he has never heard the name in his twenty-something years of existence. But more is to unravel. Robin takes Amir to Edgar’s club, writes the name “Robin Feld” on the board in silence, and to Amir’s bewilderment, people place hefty bets on the name. After a minute’s beating, Robin is still in the position to stand up and ask for his pig. After the episode at Edgar’s den, they go to gourmet restaurant Finway’s, where Robin himself was once a chef. As a chef, Robin was one of the city’s most celebrated culinary pioneers, but a past tragedy seemingly made him retreat to the forests.

At Finway’s, Robin meets his old apprentice Derek, whom he fired for always overcooking pasta. In the restaurant, Robin’s soul-piercing words break Derek into pieces, and as it turns out, Robin’s memory is not marred by years of life away from civilization. They have only become more prominent through years of frugal living in tune with nature. From celebrated sous chef to a lone drifter, Robin is a saint singing the swansong of a porous way of life. One may wonder about the event that may have caused Robin’s change of heart. Fifteen years ago, Robin’s light of life, Lori, passed away due to a reason otherwise not mentioned in the story. Lori’s absence is amplified by the tape that Robin plays in the end.

Does Robin Find His Pig?

After the shocking encounter with the delinquent group at his hut, Robin goes out on a sprawling journey to search for his pig. Like the flow of water of the initial sequences, the journey is also a trip down memory lane. Robin wants the pig not because it is his only source of business – as a man attuned with nature, Robin can find truffles well without the pig. Robin wants the pig because it is his only companion, and they share a deeper ecological bond.

The search leads Robin to Amir’s father Darius at 380 Northwest Willows. He is the buyer from the city whom Robin has been looking for. Darius denies giving the truffle pig away, and Robin, in a desperate stance, recreates the dish that Amir’s parents could never forget. Now, Darius and his wife have fallen apart, and Amir’s mother spends her days at a hospital. 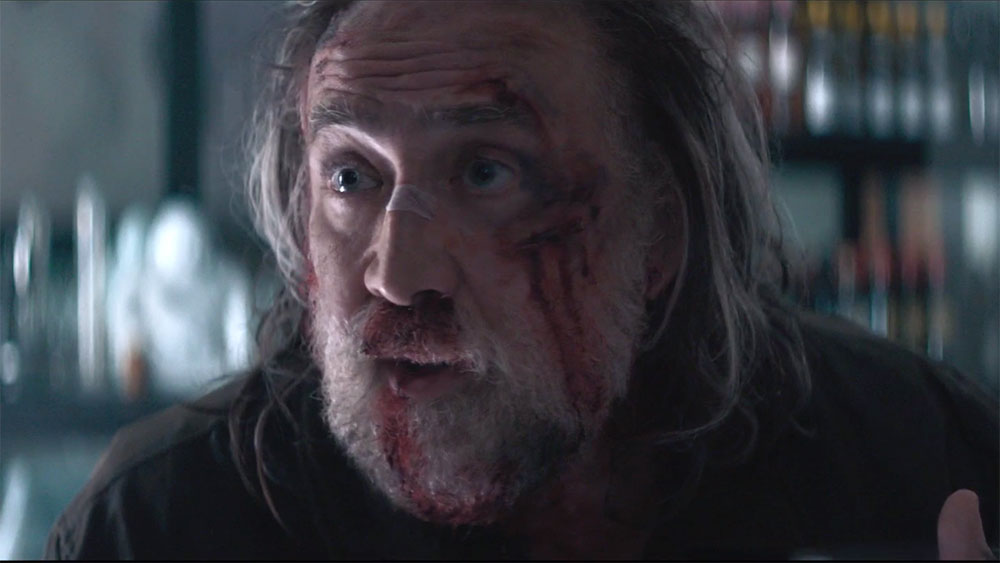 But such memories never disappear. With certain triggers, tastes, and touches, you can recreate the past. And as it happens, food — created in the right way, with care and diligence — can evoke such emotion. Robin sends Amir to Jezebel with a list, and he makes a stop at Helen’s to pick up a loaf and two salted baguettes. A perfectly cooked quail, a toast, and a wine similar to the one that Amir’s parents ordered at their coveted visit to Robin’s restaurant do the job. Darius breaks into tears, but that does not give Robin his pig back. In poaching, the pig was quite severely injured, and it died on the way to the city.

The pig represents an animistic self with whom the humane self is entwined, and the ending thus marks a tragic discord in the story. When Robin returns amidst the same bountiful nature of the early shots, the note is that of loss and emptiness. Robin conjures that if he would not jump on the quest, the pig could still be alive in his mind. He lives in denial of his career as a chef, yet he cannot deny his own memory. With the news of the pig’s death, the vision turns inward – the hero’s journey for truth ends in a larger reconstruction of the self.

Why Does Amir Listen to The Audiobook?

This is not the age of symphony but a discord. It is striking that Amir does not listen to music, but an audiobook about classical music and commentary often drowns the actual music. In our age, we chase after information because knowledge, we believe, is the currency of our age. After episodes in the past, Amir is not close to his father, and he is keen on judging books by their covers. Whenever Amir wants to play the tape, Robin stops it.

In the end, Lori’s lullaby presents a sharp binary against the non-stop audiobook that Amir listens to. Amir’s uprooted urban existence presupposes his material vanity, and the audiobook further proves that Amir is yet to find a direction in life. As opposed to Robin’s tranquil existence, Amir’s life drowns in a cacophony. The finality of the credit sequence evokes the same message. Take back a step and reflect in silence. The final message is that the wisdom of nature’s layered symphony is worth a thousand such audiobooks.