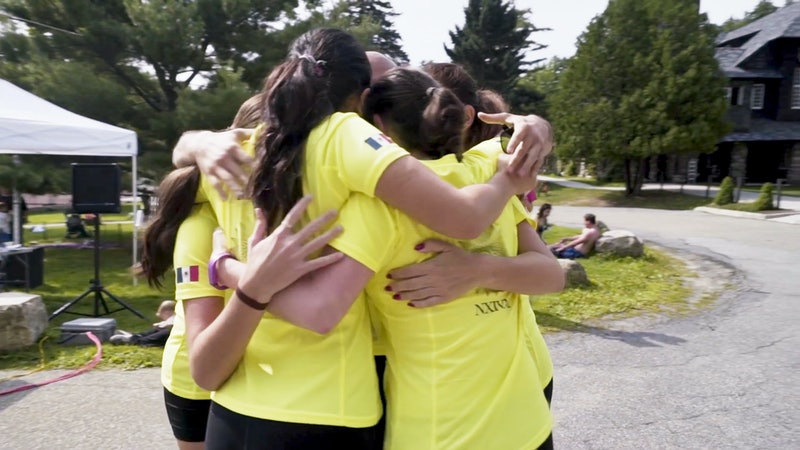 HBO’s ‘The Vow’ is a nine-part documentary series that is directed by Emmy award-winning and Oscar-nominated Jehane Noujaim and Karim Amer. With access to insiders and former members, it explores the world of the controversial self-improvement group NXIVM. Following a range of people who joined this group and then subsequently left it, this series takes a deep and nuanced look at their experiences, their growth, their motivations, and how their internal conflicts over the events of the organization led to their sourness towards it. With the first episode setting quite a positive base for NXIVM and its founder, Keith Raniere, you must be wondering what the makers have planned for episode 2, right? So, read on to find out!

The ending of ‘The Science of Joy’ set the premise for episode 2 quite nicely – with Bonnie Piesse calling her husband, Mark Vicente, to talk about her doubts of the organization and how her gut is telling her that something bad is happening. Following that, episode 2, ‘Viscera,’ will focus on Bonnie leaving NXIVM after seven years, and her desperately trying to get through to her husband, who is still blind to the cult-like workings of this “self-help group.” However, Mark’s loyalty towards Keith and NXIVM would start to crumble when a series of phone calls would reiterate his wife’s fears and sow doubt in his mind as well.

Where to Stream The Vow Episode 2 Online?

‘The Vow’ is an HBO original series, so you can stream it on the channel at the above mentioned time if you have a cable subscription. Even if you don’t, you don’t need to worry about missing out. You can also watch episode 2 of ‘The Vow’ on HBO’s official website, HBO Max, or on the HBO Go App. If that doesn’t work for you either, then you can stream the episode after it finishes airing, on Amazon Prime or HULU, with their HBO package add ons. If you don’t have cable, all you need is an internet connection and some subscriptions.

In ‘The Science of Joy,’ ex-members of NXIVM (pronounced “nexium”), primarily Sarah Edmondson and Mark Vicente, lay out how they got roped into the “self-improvement organization” in the first place, and why the decided to keep being actively involved in it. They show us the enormous promises of Keith and Nancy, co-founder of the company, by shining a spotlight on the community they gave them. The joyful feeling of self-improvement, the sense of belonging, mutual respect, and the motivation of finally having a purpose had them hooked. And, we’ll be honest, with how well everything was explained and portrayed, even we got the appeal of NXIVM.

From the very beginning, when Mark explains that he’s documenting his time there as evidence, there are hints that something strange would be happening. But, as time goes on, we kind of put that on the back burner, especially because we see Keith’s words of ESP NXIVM being a tool to allow people to optimize their human experiences and behavior come to life. Without any drug intake or harmful practices, people did improve, simply by talking, and that’s what made NXIVM so marvelous. Those who scoffed at the rules, the rituals, and the hierarchy, by the third day wanted to be a part of it all and succeed as well, not just for personal reasons but for the greater good. “Humanitarian” is the word that was used, a lot.

Within ESP NIXVM discomfort was promised, but it was also mentioned that progress without it would not be possible. Therefore, a lot of people agreed to open themselves up and reveal their deepest secrets and emotions. They became vulnerable and let their inhibitions and phobias go. As time went on, people moved up, and as they did, the organization expanded, so much so, that apart from Hollywood’s involvement, even the Dalai Lama came in support of it. After that, came the various societies within the organization – from creative arts to language, to self-defense, to women groups, everything was there. Curing Tourette’s from talking was also a “science” that NXIVM mastered.

But, just as everything was going well, Bonnie Piesse, Mark Vicente’s new wife, got the gut feeling that something was wrong. She didn’t realize it when her wedding was just NXIVM and her mother, or when she didn’t go on a honeymoon, but it was later, both too soon and too late at the same time. Bonnie had a fishy feeling about the way the organization that she was dedicating her life to was working, and the way that women were treated within it. And thus, in a cautious manner, on a phone call, away from prying ears, she tried to talk to her husband about it. And, that’s how episode 1 was left off.