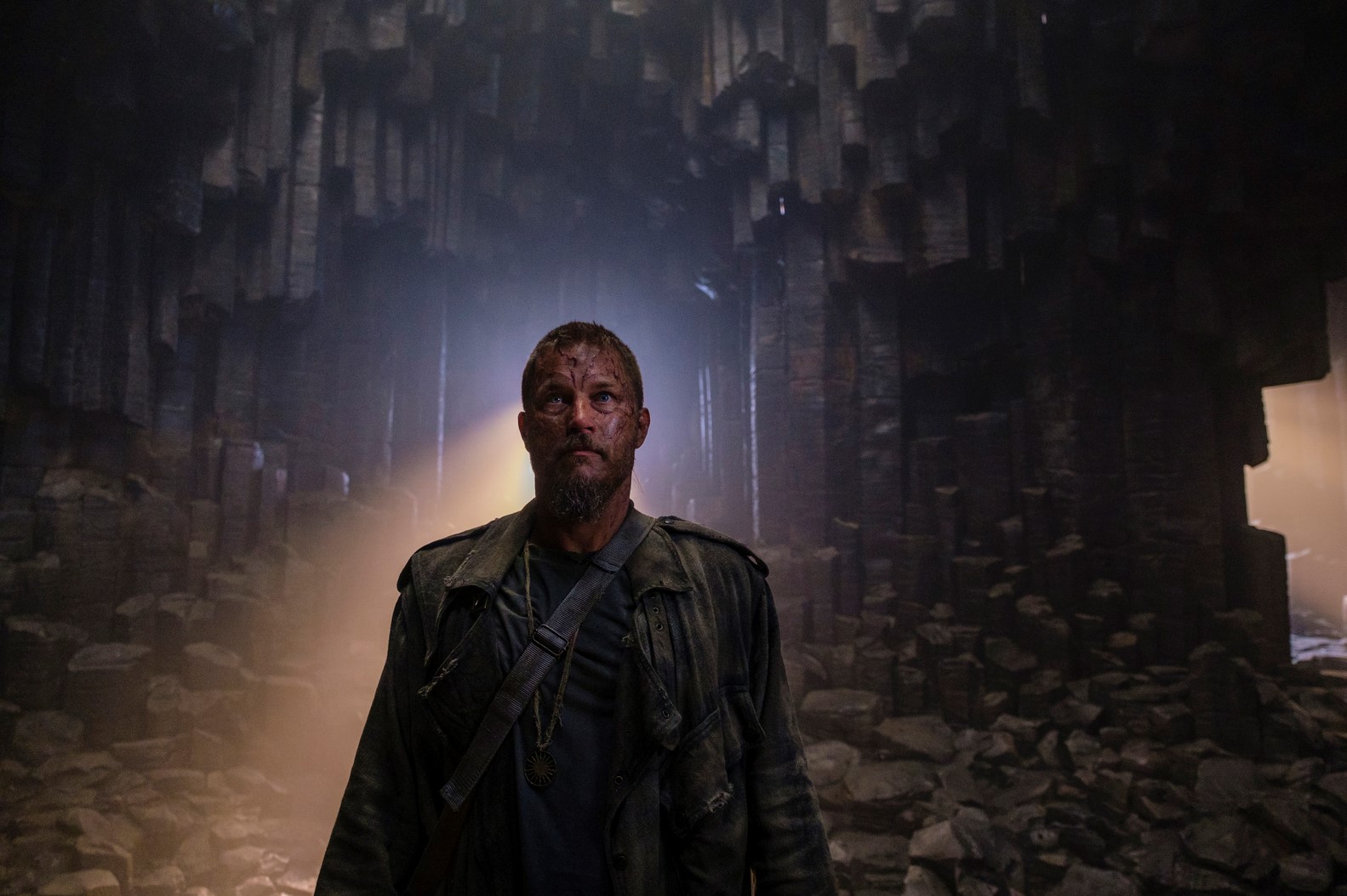 In ‘Raised by Wolves’ season 2 episode 3, titled ‘Good Creatures,’ while hunting for the Serpent, Mother/Lamia discovers a startling truth about the creature. Father (Abubakar Salim) encounters Marcus (Travis Fimmel), who easily defeats the service android and frees the Mithraics. Discontent starts to brew among the Mithraic children about their life in the Collective. Father realizes that he too can potentially give life. Paul reunites with his mouse, and Father and Campion share a candid moment. Here is everything you need to know about the ending of ‘Raised by Wolves’ season 2 episode 3. SPOILERS AHEAD.

The episode begins as the atheists go out to hunt for the Serpent, believing it has killed the Marine Research Team. Mother encounters Father as he leads the Mithraics to be used as baits. She then heads to the mountains and discovers that the Serpent is herbivorous and couldn’t have caused the attack on the Marine Research Team because the acid sea would have the same effect on it as it does on humans. She subsequently brings the creature to the settlement with permission from the Trust.

Meanwhile, Father comes across Marcus, Tamerlane, and Decima. The fanatic Marcus from the tail end of the first season is gone. However, this isn’t the atheist Caleb wearing Marcus’ face either. This Marcus is a seemingly enlightened and enigmatic religious leader who has truly come to terms with his faith. He asks Father to free the Mithraics. When the android refuses, the two fight and Marcus defeats Father with surprising ease. Elsewhere, Paul and Campion realize that Vrille is a part of Marcus’ group. Paul is later interrogated by the Trust, who reveals that Marcus will be hunted down soon.

After regaining functionality, Father makes an interesting discovery. Droplets of his fuel-blood accidentally fall on the remains of the ancient android he found, and it starts to repair itself. Father’s relationship with Mother has always been complex and remarkably human. In this episode, Father becomes jealous after realizing that Mother has formed a close bond with the creature.

In search of fuel-blood, he visits a woman named Nerva along with Hunter. Not having any other way to pay the woman, he agrees to fight an industrial android for money. The Serpent’s birth and then the easy defeat against Marcus have filled Father with very human doubts about his masculinity. In the presence of Hunter, Tempest, and several atheists, he wins his bout against his opponent.

Raised By Wolves Season 2 Episode 3 Ending: What Is Happening to Marcus? What Are the Markings on His Face?

Since the end of the first season, Marcus seems to be undergoing a physical metamorphosis. Strange markings have appeared all over his face, and they seem to move. Whatever is happening to him has given him certain physical abilities, with which he withstands the electrical attacks from Father. In season 1, his disgruntled followers forced him to swallow at least one of Mother’s necromancer eyes. It seems that his transformation began from there and has progressively become extreme.

Although he doesn’t seem to hear the voice any longer, Marcus’ belief in Sol is stronger than ever. On Kepler-22b, he virtually forms a new religion, proclaiming himself the prophet of Sol. He urges his followers to forget the prejudices of Earth and embrace their new life on the new planet. Marcus intends to turn every single member of the atheist settlement and begins the process early in the second season. Decima is the first to embrace Marcus’ teachings, followed by Tamerlane.

In episode 3, he convinces the Mithraics he frees from Father to join his faith, and they start revering him once more. Towards the end of the episode, Marcus reunites with Paul, who has come to warn him about the Trust’s plans. Paul constantly struggles with his faith while living among the atheists. The same thing can be said about Holly. Meanwhile, Campion’s belief firmly exists somewhere between skepticism and faith. Marcus welcomes the three of them into their fledgling community with open arms. Even if they decide not to stay there, they now know that there is an alternative. And that seems to be enough for now.

Read More: What Is the No. 7 in Raised by Wolves? What Happened to It?