Review: Desperados is a Feel-Good Romcom 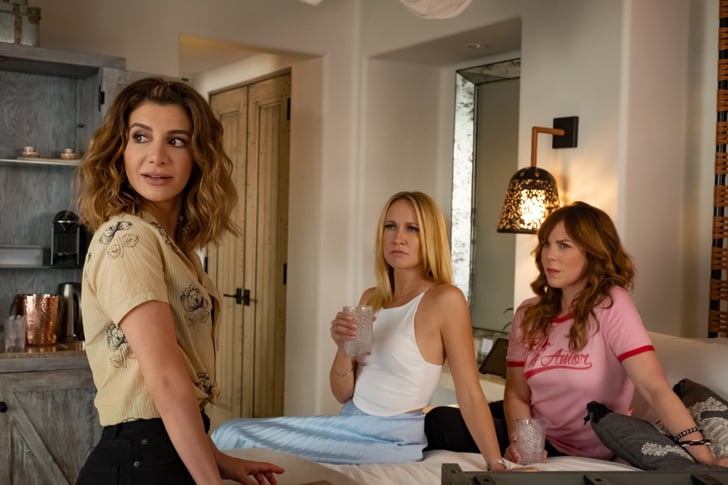 There are two kinds of romance movies: the cheery, uplifting ones that leave one feeling giddy and warm. Then there are those which make one reach out for a box of tissues every other minute. Well, Netflix’s ‘Desperados‘ certainly falls into the former category. It wouldn’t be wrong to say that the movie is more of a comedy than romance, but love is an integral component of its plot.

The movie stars Nasim Pedrad in the lead role who plays the character of Wesley or Wes. Pedrad is best known for starring in projects such as ‘New Girl‘ and ‘Aladdin.’ On the other hand, Robbie Amell and Lamorne Morris play integral characters in the film as well. Amell, who plays Jared, is best known for starring in ‘The Flash‘ and Amazon’s ‘Upload.’ Morris has also starred in ‘New Girl’ like Pedrad. Other than that, Anna Camp and Sarah Burns also essay pivotal roles in the movie.

Wesley is struggling in every component of life: she doesn’t have a job or a partner and a pole falls and destroys her car. Then, she goes on a date with Sean which the latter ends abruptly. Directly after that, she meets a charming man named Jared who takes her home after she slips and falls down. She falls in love with him immediately, hiding her true self in an effort to woo him. However, when he does not text or call her for a few days, she thinks that he has ghosted her. Then, Wesly sends a long and rather insulting email to Jared. However, Jared calls to inform her that he had gotten into a car accident in Mexico, not having read her email.

Along with her friends, Brooke and Kaylie, she heads to Jared’s hotel in Mexico, in order to sneak into his room and delete the email. It turns out that Sean is at the same hotel. After a few mishaps which lead to Wesley being considered a pedophile, she and her friends end up being chucked out of the hotel. When she decides to break into the hotel, she gets caught and is jailed. Sean comes to pick her up after she is released. Wesley decides to meet Jared at the airport, take a flight back with him and delete her email on the plane. She asks Sean to drive her. Sean tells her that he had ended the date abruptly because it had been his first date after his marriage had ended with the death of his wife. It had felt too real too fast for him.

On the plane, she ends up confessing to having sent the email. Jared breaks up with her since she wasn’t being herself. She ends up fighting with her friends who feel neglected. Back home, she gets a job on Sean’s recommendation. Then, she apologizes to her friends and they forgive her. She goes to Sean and asks him out. The two of them kiss.

In a nutshell, ‘Desperados’ is a movie that some might enjoy on a boring day. It is certainly not a film that would invite repeated viewing or one that will remember for a long time. It is an average rom-com that won’t sweep anyone off their feet but won’t make viewers sleep either.

To begin with, let’s highlight some things that do work for ‘Desperados.’ The gorgeous setting is the first thing that comes to mind in this squeaky clean presentation wherein even a dingy hotel looks rather exotic. The Mexican locales certainly make one not take their eyes off even when what is going on gets dry occasionally.

Moving on, there are a handful of moments that are genuinely laugh-out-loud hilarious. Some of them (like a dolphin’s penis slapping Wesley’s face) do feel staged but are funny nonetheless. If the Netflix film had managed to pack in more of such scenes, it might have elevated an average production. The reason these scenes work is the acting. The cast members do feel natural in their respective roles. The casting is on-point and none of the actors overplay or underplay their parts.

Apart from the comedy, there are some feel-good moments too. However, they are not very deep, but still manage to put a smile on one’s face. Yet, ‘Desperados’ is extremely predictable. The audience knows what’s coming every step of the way and that takes away from the impact of most of the scenes. For instance, it is easy to see that Sean and Wesley would end up together. It is easy to see that Wesley’s friends would take her back.

That brings us to another major flaw in the movie: everything is too easy. The conflicts are resolved in a rather painless manner as if the characters did not need almost two hours of screen time to figure their problems out. Apart from Wesley, the other characters’ conflicts are not even developed fully. The writing is lazy at best when it comes to secondary characters. For example, the issues of Wesley’s friends only seem to surface around the time of resolution. It is as if the movie tells viewers that these two characters had x problems that had just been mentioned once or twice previously.

To conclude, ‘Desperados’ won’t blow your mind and it is not a must-see movie by any stretch of the imagination. However, if you have some time to spare and wish to watch something casually, ‘Desperados’ could be an average time-passing companion.