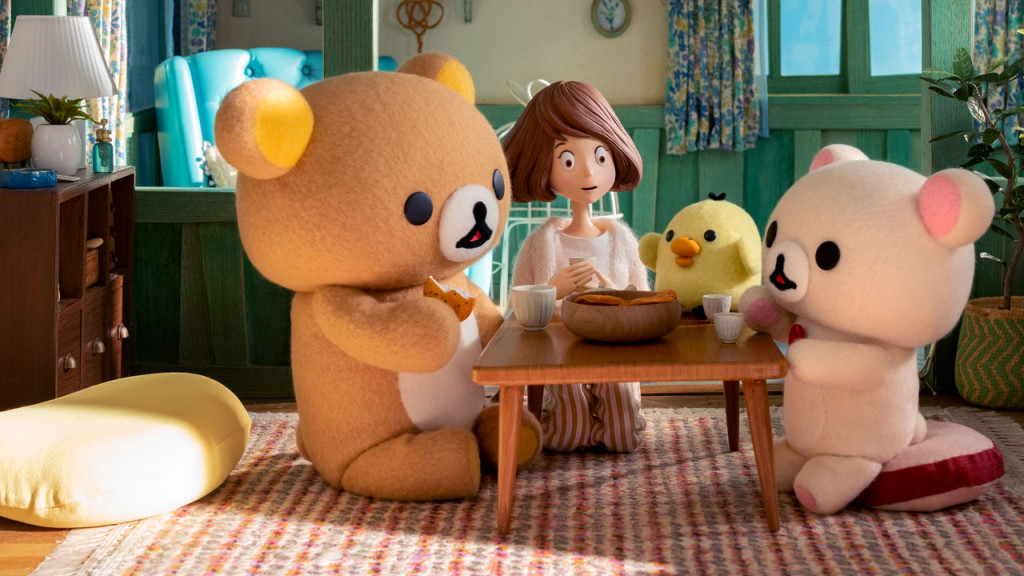 ‘Rilakkuma and Kaoru’ is an animation series targeted at families that is available for streaming on Netflix. It first premiered on April 19, 2019. Masahito Kobayashi is on board to direct the series which has Aki Kondo and Naoko Ogigami to thank as its creators. Aki Kondo is also the former employee of San-X, the Japanese company, that is responsible for the creation of the character Rilakkuma which has been largely used as a flag-bearer of San X.

The character, which was conceived way back in 2003, has since gone on to appear on items such as stationery, dishware, backpacks, and stuffed animals. The background about the creation of Rilakkuma is a rather interesting one. For those unaware, San-X puts its staff under the obligation to come up with one cute character per month. Kondo had seen a television show about dogs and wished to own a pet since she was working hard at the time and wanted a more relaxing life. Thus the character came into being, as an embodiment of her own wish, and quickly became a huge hit, and a survey conducted showed that the character was among the most popular in Japan. Now that Netflix has a show about it, Rilakkuma is gaining global popularity as well.

Rilakkuma and Kaoru Season 2 Release Date: When will it premiere?

‘Rilakkuma and Kaoru’ Season 1 premiered on April 19, 2019 in the form of an ONA format on Netflix. The anime did really well with its first run and its “kawaii” appeal is not only being appreciated by kids but is turning out to be equally enjoyable for adults as well. Considering how much Netflix has been investing in anime recently, it seems very less unlikely that they would just give up on a show right after its first season, especially when it has been received so well by most viewers.

Although no official confirmations about its ‘Rilakkuma and Kaoru’ Season 2 release date have been announced yet, sooner or later it will be renewed. We can expect some official news regarding its new season somewhere by the end of 2020. Till then, you should definitely check out other similar stop motions animated films.

The English Dub of ‘Rilakkuma and Kaoru’ Season 1 is available on Netflix.

Rilakkuma and Kaoru Plot: What is it about?

The plot of ‘Rilakkuma and Kaoru’ is centered around Kaoru, a hard-working woman, and Rilakkuma, a bear who loves relaxing every day. In fact, the name Rilakkuma is an amalgamation of two words, ‘rirakkusu’, a Japanese word, whose closest English equivalent is ‘relax’, and ‘kuma’ which is the Japanese word for ‘bear’. Rilakkuma is the complete antithesis of Kaoru, and loves to laze around all day, eating and sleeping. However, this is not shown in a negative light. Instead, it is sometimes hinted that some relaxation is helpful and beneficial to the mind and body. We see how Kaoru deals with having a streak of bad luck and how her pet and stuffed bears help her out.

The show is made for those who live life to the fullest every day, trying to work hard, and not letting things get them down. It focuses on the bittersweet time that Kaoru spends with Rilakkuma, and the relationships they form with each other. What stands out about the show is the comment on Japanese culture and in fact the commentary on the global culture under the current exploitative capitalist systems.

It is no secret that as per current working conditions, the worker is objectified as the tool, and the product is reified into whatever society will buy. Not only does this bring a degree of alienation into the work, but also forces the workers to go above and beyond to remain in the competitive market. As a result, a lot of people burn out quickly, having breakdowns and developing health issues. Kaoru faces a similar problem as she works very hard at the office and has to deal with office politics. It is the same everywhere, not just in Japan, but also in the world. Maybe, we need someone like Rilakkuma to remind us that an occasional break is good for the mind and body and will help us to be more productive in the longer run.

A long time ago W.H. Davies wrote in his poem titled ‘Leisure’, “A poor life this if, full of care,/We have no time to stand and stare.” Rilakkuma shows us a different way of living, one where we can actually pause, take a break, and enjoy the smaller things, like the fluttering of flags in the wind, or the simple joy of catching a fish, or the relaxing act of laying back and staring at the stars in the nighttime.

The series might be adorable on the surface and have you going gaga over how cute the stuffed bears are and how their relationship with Kaoru plays out, but there is a deeper effort underlying the series. The stance propagated by Rilakkuma is an attempt at combating a common problem in Japanese society which is called ‘karoshi‘. This term literally means death by overwork. While Japanese people have a strong work ethic, this tendency of overworking to the point of death has been a blight on their society for a long time and some reports have also drawn links about traditional cultural instincts of conformity and self-sacrifice being at play here. This is what makes the series so important in the modern-day and age. Across all job markets, everyone is working overtime, and Rilakkuma is here to say that we all deserve a break, and coming from such an adorable bear, no one is going to disagree.

Hopefully, the upcoming season continues in a similar manner and we see more of the sweet relationship between Rilakkuma and Kaoru play out, as we get good advice from the bear about how to take life a little easier.

Rilakkuma is a brown soft toy-like bear that suddenly appears on Koaru’s doorstep one day. After this, the bear moves in with her and most of his interests are confined to just sleeping and eating. He never really contributes to any of the housework but tries to cheer up Kaoru every time she is stressed out because of her work.

Soon after Rilakkuma’s appearance, another similar white-colored bear appears at Kaoru’s doorstep. This bear is Rilakkuma’s best friend and appears to be slightly shorter than him. Just like Rilakkuma, he does nothing except for eating and sleeping throughout the day but still stays in the apartment with the two of them.

Kiiroitori is a tiny yellow chick who is Kaoru’s pet. Unlike the two bears, Kiiroitori is extremely hard working and tries to clean up the house in every possible way she can.

Karou is an office lady who is somewhere in her 30s. When Rilakkuma and Kiirotori turn up at her doorstep, she unanimously agrees upon letting them stay with her. While the two bears remain stress-free all the time, Kaoru has the habit of worrying about every little thing. The only thing that keeps her relaxed is the cute presence of the two bears and her pet bird who always find new ways to keep her happy.

While we wait for an update on season 2, check out the season 1 trailer to refresh your memories. You can catch all the episodes of season 1 on Netflix.