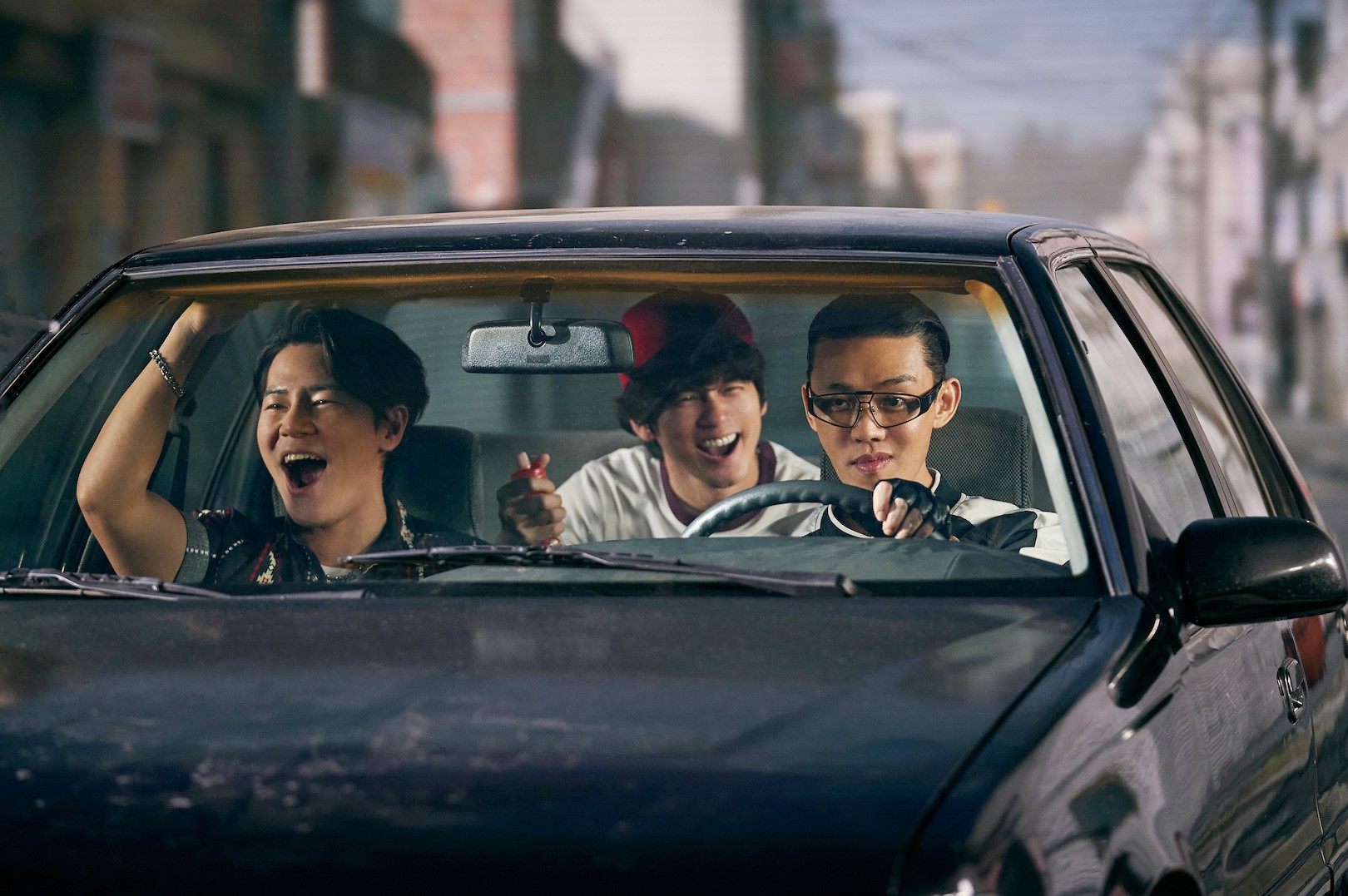 Netflix’s ‘Seoul Vibe’ is a breezy heist-action film filled with fast cars and hip-hop music. The story is set during the days leading up to the 1988 Seoul Olympics. Park Dong-wook (Yoo Ah-in) and his friends face imprisonment on various charges. To escape such a fate, they must infiltrate a VIP slush fund and gather information. Dong-wook and the others reluctantly agree and soon find themselves in a potential conflict with some of the most dangerous people in the country. Throughout all this, Dong-wook keeps his dreams of going to America alive. Here is everything you need to know about the ending of ‘Seoul Vibe.’ SPOILERS AHEAD.

The film begins in Saudi Arabia, where Dong-wook and his young mechanic Joon-ki (Ong Seong-wu) transport dangerous goods through the desert for a man named Yoon. After what is supposed to be their last job in Saudi Arabia, Yoon gives Dong-wook a poster of Daytona Continental, knowing that it has been the younger man’s dream to participate in that legendary race along with their final payment. Dong-wook and Joon-ki return to Seoul just as the city gets ready to host the Summer Olympics. They find that their old friend and the best navigator in Seoul, Bok-nam (Lee Kyu-hyung), has come to pick them up. However, there are also a group of men in suits that seems interested in Dong-wook and Joon-ki, and Dong-wook seems to recognize their leader. The protagonists manage to escape and reunite with Park Yoon-hee (Park Ju-hyun), Dong-wook’s sister and the head of the Seoul branch of a motorcycle club, and John, a club DJ, before the group of men in suits find them. It turns out they are from the prosecutor’s office. Most members of the team have met their leader, Prosecutor Ahn.

Collectively called the Sanggye-dong Supreme Team, Dong-wook and his friends have different cases pending against them and can easily be arrested. So, when Prosecutor Ahn makes an offer, they have no choice but to accept. The prosecutor explains that the Sanggye-dong Supreme Team has to get inside a VIP slush fund and gather information about how they are laundering money. While John will infiltrate as a DJ for the parties, the rest will try to be mules of the money. All the drivers of the slush fund have been arrested. This leaves the position open for Dong-wook and his friends.

The Sanggye-dong Supreme Team soon learns that their targets are some of the most dangerous people in South Korea. The first target is Kang In-sook, the president of the loan shark industry and the second most powerful person in the country. The second target is Lee Hyeon-gyun, a former Defense Security Command, who now works directly under Ms. Kang. However, Prosecutor Ahn makes it clear that his real target is General Jeon, the ruthless dictator that headed the former government. He seems to be based on Chun Doo-hwan, a real-life military strongman who served as the 5th president of South Korea.

Lee and Chairwoman Kang manage the former government’s secret fund, so they directly answer to General Jeon. Even though he doesn’t hold his position as the head of the government any longer, General Jeon is still the most powerful man in the country. While his friends realize the immense danger that comes with this job, Dong-wook reasons that they just have to serve as mules. He accepts Prosecutor Ahn’s offer. In exchange, he demands visas for all group members on top of what Ahn already promised them — they will be allowed to keep their money and their criminal records will be wiped clean.

Seoul Vibe ending: Do Dong-wook and His Friends Go to the US?

The film begins by raising this question and ends by answering the question. What we see in the middle is how Dong-wook and his friends achieve their goal, though the journey is much more perilous than what they would have preferred and people get hurt.

While Dong-wook, Yoon-hee, Joon-ki, and Bok-nam win the driving competition and become mules of the secret money of the previous government, John tries to find Ms. Kang’s accounts ledger. He becomes romantically involved with her secretary, Kim Yoon-jae.

The group suffers some initial setbacks. Director Lee burns their car and inadvertently destroys the video evidence that the group has collected. But things get better for them as the film progresses. They earn an exorbitant amount of money and are gifted a luxurious apartment. However, the group is soon made acutely aware of their situation when Director Lee stops Dong-wook and Joon-ki during a delivery one day. He has brought Yoon-hee and Bok-nam with him. Director Lee threatens to kill all of them if they don’t reveal who they are working for. However, when none of the four spies break, Director Lee declares that it was all a test.

The incident makes it extremely clear to Dong-wook how much danger he and his friends are in. By the time John hears about the incident, he has already made an imprint of the key to the locker where Chairwoman Kang keeps the ledger. Dong-wook declares that he doesn’t trust Prosecutor Ahn and immediately wants to leave Korea with his friends, while John wants to remain in the country and bring the entire racket down. This inevitably leads to a major confrontation between them.

In Prosecutor Ahn’s car, Dong-wook finds a tape of the general, Ms. Kang, and others discussing their business. When the topic of a potential fall guy comes up, Ms. Kang suggests that they should use Director Lee for that, and the others gleefully agree. Using the tape, Dong-wook continues Director Lee to work with him and let him transport the money.

As the opening ceremony for the Olympic takes place, Dong-wook sets out with the money, with Direwctor Lee and his people following him. This gives his sister the opportunity to free John. Dong-wook veers from the planned route, making Director Lee realize that it was all a ploy. Refusing to surrender to the prosecutor’s office, Director Lee dies when his car catches fire, all the while cursing the general. Ms. Kang tries to leave the country with the money, but Dong-wook gets on the plane. With the net securing the money stuck to his car, Dong-wook drives off the plane thousands of feet in the air. He survives the fall and reunites with his friends. They now have the visas, money, and clean records — everything they need to relocate to the US.

Portrayed by Kim Chae-eun, Kim Yoon-jae is one of the important supporting characters in the film. She is Ms. Kang’s secretary and has a tattoo of the Triskele, which apparently everyone loyal to Ms. Kang gets. Realizing how close she is to one of their targets, John seduces her and creates an imprint of the key to the locker where the ledger is kept, effectively sealing her fate. Later in the film, while he is being tortured, Ms. Kang shows him a severed hand with the Triskele tattoo. Evidently, Ms. Kang brutally punished Yoon-jae for her role in John’s actions. However, from what Ms. Kang tells John, Yoon-jae is supposed to be still alive.

What Is the Significance of the Mid-Credits Scene?

The mid-credits scene takes place a year later. Having lost all the money, General Jeon now seems to live at the monastery. It’s winter, and he has been tasked to sweep away the snow. General Jeon tries to convince himself that his life isn’t that bad by quoting the scriptures, but it quickly becomes clear how miserable he is. Suddenly, a massive flock of birds comes, and collectively defecate on the former president. General Jeon may not have died like Director Lee and gone to prison like Ms. Kang, but he is still trapped in his personal hell.

Read More: Is Seoul Vibe Based on a True Story or a Book?