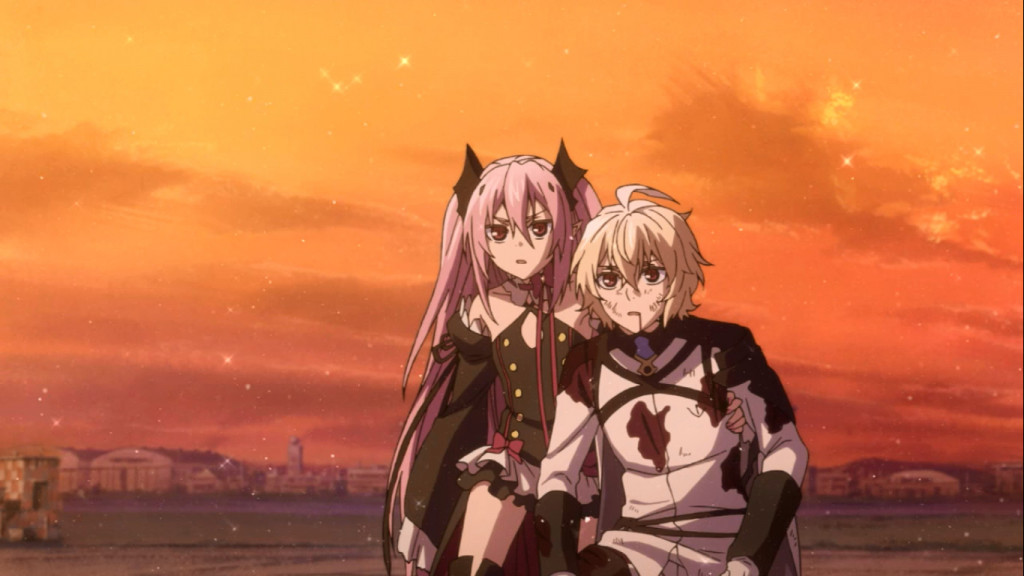 The most unusual thing about ‘Seraph of the End‘ is that it has no protagonist or antagonist and refrains from getting into the typical hero/villain themes. This anime is all about perspective and even the evilest characters have good reasons backed up to support what they do. Everyone gets a justified standpoint during conflicts where the humans have their own point of view and the vampires have their own. There is no wrong or right and nothing is black and white — ‘Seraph of the End’ is not your typical shounen anime.

Not too many anime are known for their music and seiyuu (Voice actors) but ‘Seraph of the End’ is an exception and it literally has its music CDs selling out separately. So even if you’re not into the anime or midway through if you start getting bored, you can always stay for the music. But it is not enough to have good music to back up an anime or let’s say any form of cinema. If it does not suit the setting of the show, then its purpose is completely lost. We all have this one song that we remember solely because we had heard it in some anime or movie. An example of this is my personal favorite ”Ikue Asazaki’s Obokuri Eeumi” from ‘Samurai Champloo’. ‘Seraph of the End’ is going to give you many such wonderful and memorable soundtracks that you will never forget because all of them just fit right in with its amazing visuals.

Those who read mangas before watching anime have to go through some really conflicting feelings that make them wonder if they should go ahead and watch the anime or not. These contrasting thoughts will not haunt you in this anime because it not only sticks to the plot of the manga but also executes it with the most meticulous detailing. The pacing of anime series often takes a toll when they go down this road of staying loyal to their source material and that’s where ‘Seraph of the End’ stumbles a little but eventually it does find its way back and turns out to be very enjoyable. In fact, it’s one of those few anime that indirectly manages to promote the manga it has been adapted from.

Speaking of promotion, ‘Seraph of the End’ was promoted with a bang when it was first aired. But big displays, huge merchandise, and giant billboards for promotion are not new marketing phenomena for JUMP SQ anime adaptations. The whole outbound marketing did work out really well for it and gave this dark anime some much-deserved attention. But for the second season, this kind of promotion was not even required during its release because the anime had already established a solid foundation with a good number of fans. Not too many shounen anime are able to create a justifiable balance between action and drama but this anime does it with ease and that’s what makes it a true gem. So if you haven’t already seen the anime, then it’s about time you pick it up and treat yourself with this world of quality action scenes and heart-wrenching emotions.

Seraph of the End Season 2 Plot:

A man-made virus plagues the surface of the Earth in the year 2012 and brings mankind to the brink of extinction. Strangely, children below the age of 13 are somehow immune to this virus. ‘Seraph of the End’ centers around two main characters named Yuichiro and his friend Mikaela, who escape their orphanage at the age of 12 along with a few other kids. Things don’t go as planned and almost all the other children die, leaving behind Yuichiro and Mikaela as the only survivors. Vampires now haunt every corner of the Earth’s surface and these 12-year-olds are out there all alone. Things get worse when Mikaela also dies while sacrificing herself for the sake of Yuichiro’s survival. For a long time, he hides for survival until he is rescued and adopted by the Moon Demon Company.

Enraged by the death of all of his loved ones, especially Mikaela’s, Yuichiro decides to join a special vampire hunting unit led by the Japanese Imperial Demon Army. He sees this an opportunity to avenge the death of each and every person he has lost in this war against vampires and after intensive training in this unit, he is ready to kick some vampire a**. Meanwhile, the vampires smartly hold humans as hostages so that they can feed on their blood from time to time and in return, these humans get to live. Yuichiro continues his Vampire hunting quests with his team of experts and in a matter of a few years, he becomes a significant member of their company. He swears to end the life of every Vampire that walks on Earth but all this soon changes.

Yuichiro comes to know that his childhood friend Mikaela who was presumed dead is still alive but is not a human anymore; he is a vampire. Desperate to make things normal again, Yuichiro looks for ways through which he could transform his friend back to his human form. But if it was that easy, then everyone would be doing it already. While he looks for answers to this, he is told that in a month’s time, the city of Tokyo will be attacked by a huge group of Vampires. Yuichiro must now prepare for war against these blood-thirsty monsters but he must also make sure that his friend does not get involved in this war in any way. The only way he can save Mikaela and bring back his only “family” is by finding a way of turning him back to normal. Will he be able to do this before one of them gets hunted by their oppositions?

Seraph of the End Season 2 Review:

The big problem with the storyline is its pacing. This is just another common challenge that is faced by most 12 episode shounen anime that try to cover too much ground in just one season. The story feels a little stale at times because nothing much changes after the first season. However, the “family” theme adopted in season 2 was quite good and it forms a solid base for one deep emotional journey to the “feels lane”.

The characters survive not for themselves but only for their loved ones and it’s really heartbreaking to see how much they lose along the way, especially the two characters, Mikaela and Yuichiro, who never had any blood relations but still found a family in each other. But even that gets taken away from them way too soon. Yuichiro’s desperation towards finding a way to revive his friend is just too depressing to watch. All this while he had presumed that his friend was dead but now he comes back in a form in which he’s no better than a dead person. You can literally feel the helplessness that Yuichiro feels through this and that’s when you start drifting into the dark vibe of the show.

The story build up of the first season benefits the characters in this season. Initially, it just looks like Yuichiro is going through a series of unfortunate events that make his life more miserable with time. But you start connecting the dots when the news of Mikaela being alive comes in. The characters have been modeled off as typical shounen characters but that does not make them any less entertaining. There have been episodes that take some time off from the war and actually focus on character interactions for a span of 24 minutes. Efforts have clearly been made in character development but only people who are fine with typical shounen based characters will be able to appreciate this aspect of the show.

The animation is slightly below than the usual standard that is maintained by Wit Studio but the art side of it is just beautiful. The wasteland apocalyptic set up has been portrayed really well with a graying tint of intentional dullness that makes the color pallet all hazy. Some might find this unattractive but what else can you expect from a dystopian world like this? The whole idea behind it is to make it look disturbing and gloomy, which has been done in a way that truly serves the purpose.

I have already expressed my undying love for the soundtracks of the show, so I won’t go ranting about it all over again. If you, like me, dig the soundtracks of ‘Seraph of the End’, then you can get them here. Overall, it’s safe to say that this anime is slightly above average because it manages to do something most shounen fail to these days and that is to strike the right cords with drama and action together. It has made a lot of progress since the first season, albeit rather slowly. But any progress is progress, right? So we’re just gonna go ahead and give this a 7.5 on a 10 point rating scale. An extra point 0.5 for the improvement it has managed to make since the first season. Hopefully, in the upcoming season, this anime will earn a lot more than 0.5 for improvement and will work on its weak points to reach the true potential that it holds.

The English Dubbed and Subbed versions of ‘Seraph of the End’ can be found on Funimation.