With Tony Basgallop at the helm, the horror thriller show ‘Servant’ plunges the audiences into the brooding mystery surrounding the Turner baby, Jericho. In the first episode of the third season, titled ‘Donkey,’ Leanne gets her place back at the Turner household, although the threat of the mysterious cult looms large on Leanne’s mind after the death of Aunt Josephine. The second episode, titled ‘Hive,’ prepares us for a gathering, but Leanne’s paranoia mars some of the fun. We shall get to the mind-boggling final moments, but before that, let us recollect what happens in the episode. SPOILERS AHEAD.

It’s another eventful day at the doomed household of the Turners. Dorothy has invited a few guests, mothers and children, to have some bonding time with Jericho. Leanne shudders from fear when she finds out about the gathering since some of them strangers can be from the cult. Sean gears up for some spicy Caribbean cuisine, taking Leanne as his apprentice. Mr. Smiley, the coordinator and in-house entertainer arrives with his ukulele and mediation bowl.

The guest list includes toddlers Noah, Matthew, April, Ella, and their mothers. While Mr. Smiley sings a buzzing song for the little peeps, Leanne asks Sean why Dorothy cannot be content with her family. Julian arrives with his new girlfriend Veera, and they escape to the bedroom upstairs to keep an eye on the security camera feed. When Leanne serves the main course, Dorothy insists she join the party. Meanwhile, a probing guest makes Dorothy uneasy, asking questions about Julian’s addiction and the ambulance in front of the Turner household in the summer (possibly to take Jericho away).

Dorothy dismisses the claim, while Leanne goes back to Sean to illuminate him about the peculiarities of the cult members. They would not eat gourmet food, dress up according to what they think the ordinary people wear, and their backs would be covered with scars. In the middle of a yoga session, Leanne goes to serve another round of lip-smacking food while she keeps an eye open to find blemishes on the mothers’ backs. Fulfilling Leanne’s suspicions, a mother has scars on her back.

When Leanne hurriedly retreats to the kitchen, she bumps into Sean. He accidentally spills wine on her dress, which can be a premonition for what is to come. She frantically washes her cloth and goes to her room to find Nora’s mother looking for something underneath her bed. When Leanne accuses the mother of being a cult member, she says she is looking for Nora’s pacifier. With some sleight of hand, Nora’s mother reaches her pocket and feigns grabbing it from underneath the bed. Julian asks Leanne to keep it under control. But when the party suddenly disappears, Leanne loses her calm, hurling a knife at Mr. Smiley.

Servant Season 3 Episode 2 Ending: Where Did The Party Disappear? Is Mr. Smiley From The Cult? 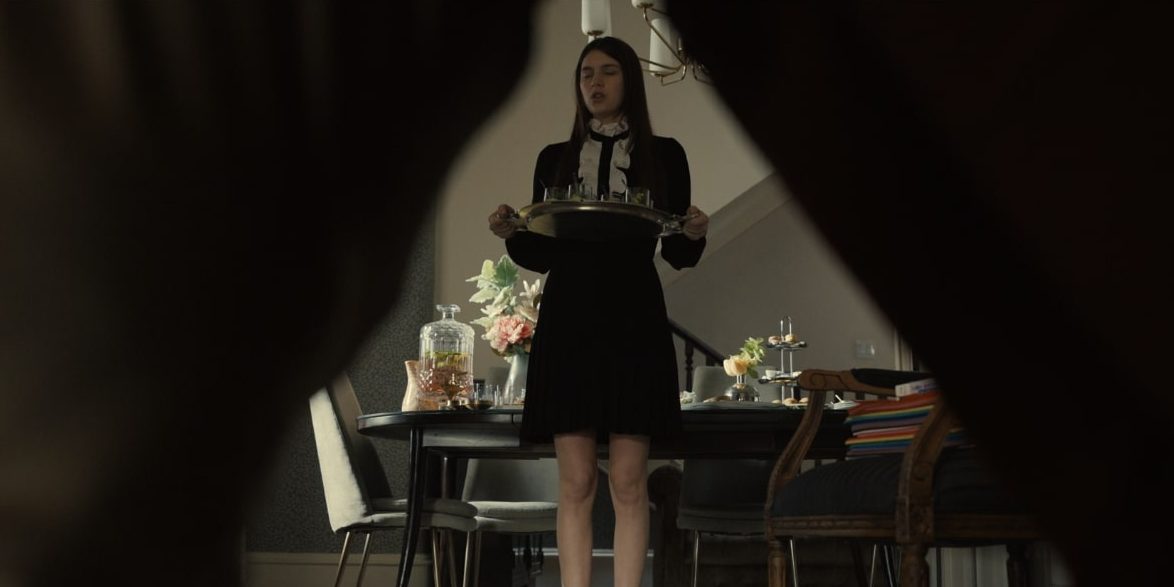 When Leanne cannot spot anyone in the house, she fears the worst – a large-scale abduction by the cult members. She threatens Mr. Smiley with a kitchen shard while Mr. Smiley asks Leanne to calm down. He assures that he would not harm Leanne, but Leanne does not look assured in the least. Meanwhile, Dorothy and other mothers enter the household to find Leanne in the state. As it turns out, they were out to get ice-creams for their children. Although, Leanne insists Mr. Smiley bare his back and show the “scars.” While Sean tries to alleviate the situation, Smiley does not have a problem undressing if it calms Leanne down. As he shows everyone his back, it seems pretty spotless. Thus, we can conclude that Mr. Smiley is just a child entertainer with no link to the cult whatsoever.

Where Did The Bees Come From? Does Leanne Release Them?

After Mr. Smiley shows everyone his back, the environment becomes lively again. Although the Society Hill ladies are afraid of the nanny, they sure fancy some wine. After Leanne bumps into Sean spilling the red wine all over the floor and on his dress, Sean opens a bottle of white wine. While the guests start sipping, a rabble of bees attacks them, coming out of the chimney at once. The guests run out of the house, taking their final leave. Sean contacts a pest control service, whose investigation of the chimney reveals a beehive in it.

According to the expert, something knocked the hive down, maybe the procedure of installing security cameras. While Sean cannot understand what set the bees off at once, the pest control professional is hardly an expert on animal behavior. Julian thinks that Leanne went up to the roof and dropped the hive through the chimney – but JJulian’stheory may be a bit too far-fetched. However, we sense LLeanne’sanger towards the guests. As she is also capable of mind-controlling animals and birds (as evident from Julian’s encounter with seagulls in the previous episode), we conclude that Leanne has a role in the bee attack.