With Tony Basgallop at the helm, ‘Servant’ is a macabre horror series that keeps the viewers on the hook with a cerebral score and a stellar cast ensemble. The story revolves around the Turner family, who appoint a nanny to look after their doll baby. The baby comes alive in the presence of the nanny but goes back to its inanimate state when the nanny is not around.

The premise makes for an enticing watch, fraught with twists, turns, and cultist intrigue. Even after the seventh episode, Dorothy wants Leanne to leave. When Sean and Julian do not pay heed to her, Dorothy makes Sean sleep on the couch. The finale unveils another shock, while Leanne probably retains her place in the household. What happens in the final minutes of ‘Donut?’ Let us delve further. SPOILERS AHEAD.

Leanne meets her clan at the park, receiving a balloon in the process. Meanwhile, the situation at the Turner household is tense. Leanne makes Dorothy tea, which Dorothy pours into the kitchen sink. Sean is shooting the Philadelphia season of Gourmet Gauntlet, and the work pressure is getting to him. Moreover, due to Dorothy’s qualms, Sean sleeps on the couch upstairs. He feels the need for an assistant, and Leanne is eager to help. Sean gives Dorothy the idea of taking her and Jericho to set, but as Dorothy stresses, it would be too much of a stir for Jericho. 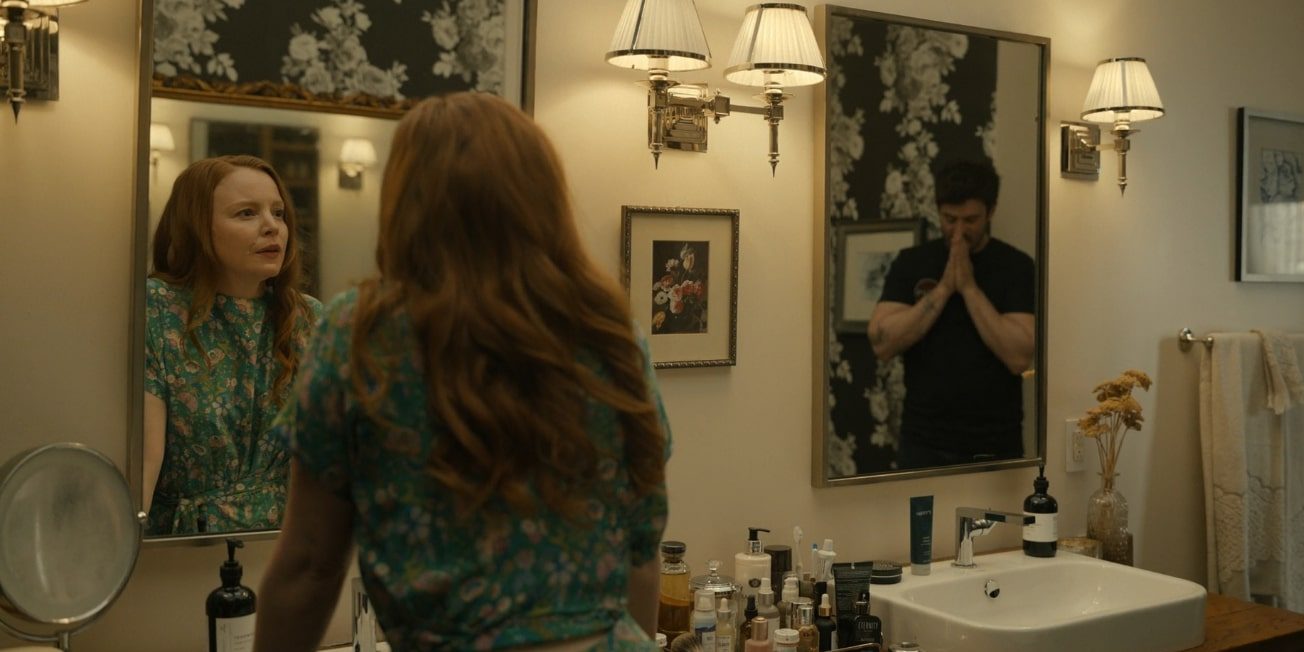 Dorothy cancels coverage since she is still looking for childcare. Meanwhile, Leanne, who stands behind Dorothy, seeks to make Dorothy understand that she is here to help. Dismissing Leanne’s assurance, Dorothy gives her an ultimatum; Leanne will never touch Jericho again. Dorothy wants Leanne out of the house, even after the incidents of the previous episode.

Isabelle appears out of nowhere, looking for some chitchat with Leanne. Leanne had been crying alone at the park, and Isabelle claims to recognize the tears. Isabelle says that Dorothy means well, but sometimes her murderous rage can be harsh. Isabelle leaves, fixing a coffee date with Leanne. At home, Sean and Julian try to fix Dorothy’s favorite painting, which is supposed to be about oppressed vaginas. It does not look more than a Rorschach inkblot painting, and thus, the reading reveals more about Dorothy’s mind than it does about the image.

On Wednesday, Leanne comes out of the house to find an ambulance standing by the park. Isabelle exchanges something with a medic, and she walks to the Turner house with a bag of donuts. A homeless person got sick, but he was alright when they took her. Isabelle seems to be up to something, and the secret of the Turner household appears to be under strain.

Isabelle seemingly wants to befriend Leanne, but we later realize her true intention: to expose Dorothy. Isabelle attempts to earn Leanne’s trust over the coffee date, which involves selling herself to Leanne. She points to a tape in Dorothy’s records, thinking she could have kept it. The video conceals Isabelle’s coverage of a wealthy hedge fund mogul. Isabelle put her life in danger, but Dorothy took the credit for it. Naturally, Isabelle holds a grudge against Dorothy, but she keeps mum and tells Leanne that what matters is that the story got published.

Then, keeping her calm demeanor, Isabelle asks if Dorothy is okay. Then, she moves on to Jericho, asking whether something scary happened to him. At the mention of the “ambulance thing last year,” Leanne gets nervous, spilling coffee on her dress. After Leanne opens her shirt, Isabelle sees the marks on her body caused by the cult people on the fair night. Leanne tries to bury the topic, and Isabelle thinks Dorothy is the culprit. Isabelle retreats, only to arrive the following morning with a grave threat for Dorothy. She knows Dorothy’s secret, and she would happily ruin Dorothy’s career. Isabelle called the EMTs that visited the Turner house last year, sniffing out Jericho’s morbid disposition.

Is Isabelle Dead or Alive? Does Leanne Have Anything to Do With It?

With the secret of the Turner household in her stride, it does not seem that Isabelle would stop before ruining the family. Leanne has found a family among the Turners despite her new status as a cult leader. Therefore, she would go to any extent to protect the Turners, even though Dorothy seeks to send her to a mental institution. Partly to cover up the secret and reassert her virtues in front of Dorothy, Leanne takes a big step.

The episode ends with the whole family — including Dorothy’s father and his girlfriend, Kourtney, with a “K” — gathered in the living room to catch Sean’s cooking show ‘Gourmet Gauntlet.’ Meanwhile, Dorothy tunes to News 8, where we see Isabelle covering a police shooting incident in Chester. While in the middle of the coverage, a bullet strikes Isabelle’s head, and she goes down. Dorothy looks at Leanne, who returns a cryptic smile. Looking at her smile, it seems that Leanne may have something to do with Isabelle’s death.