‘Severance‘ takes viewers on a mind-bending journey inside the corporate giant known as Lumon Industries. While the company’s “severance” process that separates a person’s personal and work-related memories is common knowledge, its true nature remains unknown. Mark Scout is slowly finding himself on his way to uncovering the conspiracy at Lumon and learning out the truth about the scientific procedure. In the third episode of the thriller series, Mark experiences a tragic incident that is bound to shape his quest for answers in a major way. If you are looking for details and clarification about the shocking ending of ‘Severance’ episode 3, here’s everything you need to know! SPOILERS AHEAD!

The third episode, titled ‘In Perpetuity,’ opens with Petey explaining to Mark the reintegration process after becoming unsevered and the sickness it brings. Although Mark does not want to unsevere himself, Petey urges Mark to find out the true nature of his job at Lumon. After Mark leaves the basement, Petey begins to experience a strange vision of his work self known as “workie.” The next day, Mark leaves for work, and Mrs. Selvig keeps an eye on him. She removes a book left by Mark’s brother-in-law at his doorstep and then probes through Mark’s basement. Petey manages to sneak out of the house unnoticed, but his disturbing visions continue. 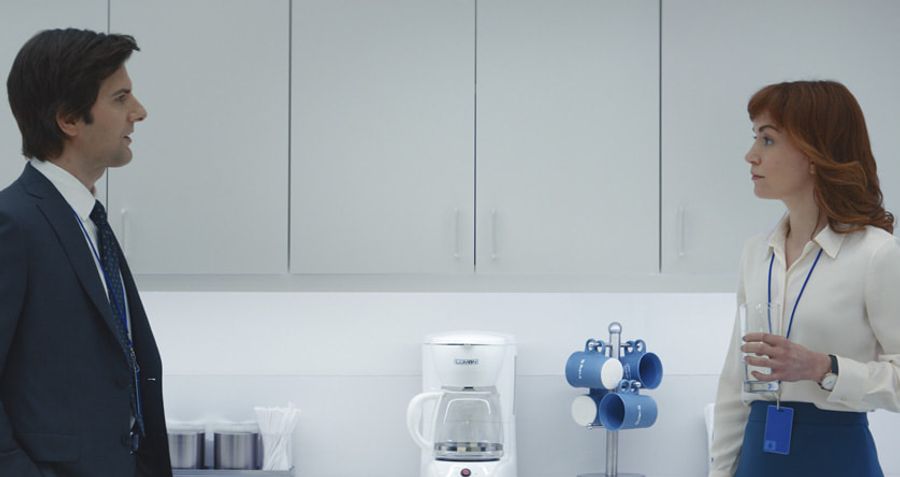 At work, Helly learns that her appeal to resign has been refused. Helly is disheartened and makes desperate attempts to get a message to her outie, but fails. To lift the team’s morale and motivate Helly, Irwin suggests the group take a trip to the Perpetuity Wing. After getting his boss’ approval, the Macro data Refining team heads to Perpetuity Wing, which is a monument of Lumon’s history. At the Perpetuity Wing, Helly learns about Lumon’s past, the founders known as Egan Family, and the CEOs. While Irwin and Mark argue, Helly attempts to deliver a message to her outie but fails miserably. She is taken to the Break Room, where Mr. Milchick forces her to read out a stringent apology repeatedly.

Elsewhere, Mark’s boss, Ms. Cobel, has a difficult meeting with the board members about the hunt for Petey. While she tries to reassure the board, the concern about Petey leaking the company’s dark secrets is growing. Moreover, the numbers of the Macro data Refining team are also drastically slipping down, which Ms. Cobel must fix. In his office, Mark finds a map behind one of the team photos and contemplates its purpose. Mark returns home and discovers that Petey is missing. While Mark searches for Petey, a tragic fate befalls his former colleague.

In the episode’s final moments, the overlap between Petey’s two separate psyches begins to harm him more than before. As Petey stumbles his way through a gas station, he becomes paranoid as memories of Lumon come flooding back. While arguing with the store’s cashier, Petey collapses to the ground. Soon after, Mark arrives near the gas station in search of Petey. However, he sees that Petey is unwell and carried away by paramedics. The two men make eye contact briefly before Petey passes out. The medics immediately rush to help Petey as Mark watches from afar. From Mark’s reactions, it is evident that Petey has passed away. It seems that Petey’s brain could not handle the reintegration process, and he died due to the long-lasting psychological damage caused by the severance.

Petey’s death will serve as a major turning point in Mark’s life, as it could compel Mark to take an aggressive approach to find answers about Lumon’s true intentions. However, Petey also served as the only link between Mark and the mysteries at Lumon. Although outie mark doesn’t seem to fully trust Petey, the circumstances of Petey’s death and his vigorous opposition to the things happening at Lumon could push Mark towards uncovering the truth. However, without Petey, Mark might get lost in this dark and ominous quest. Nonetheless, in the closing moments, Mark receives a crucial clue in the form of Petey’s phone. The phone is likely to contain crucial data and might help Mark contact the people who help Petey unsevere himself. Therefore, before dying, willingly or unwillingly, Petey passes on the responsibility of bringing forward the truth about Lumon on Mark’s shoulders.