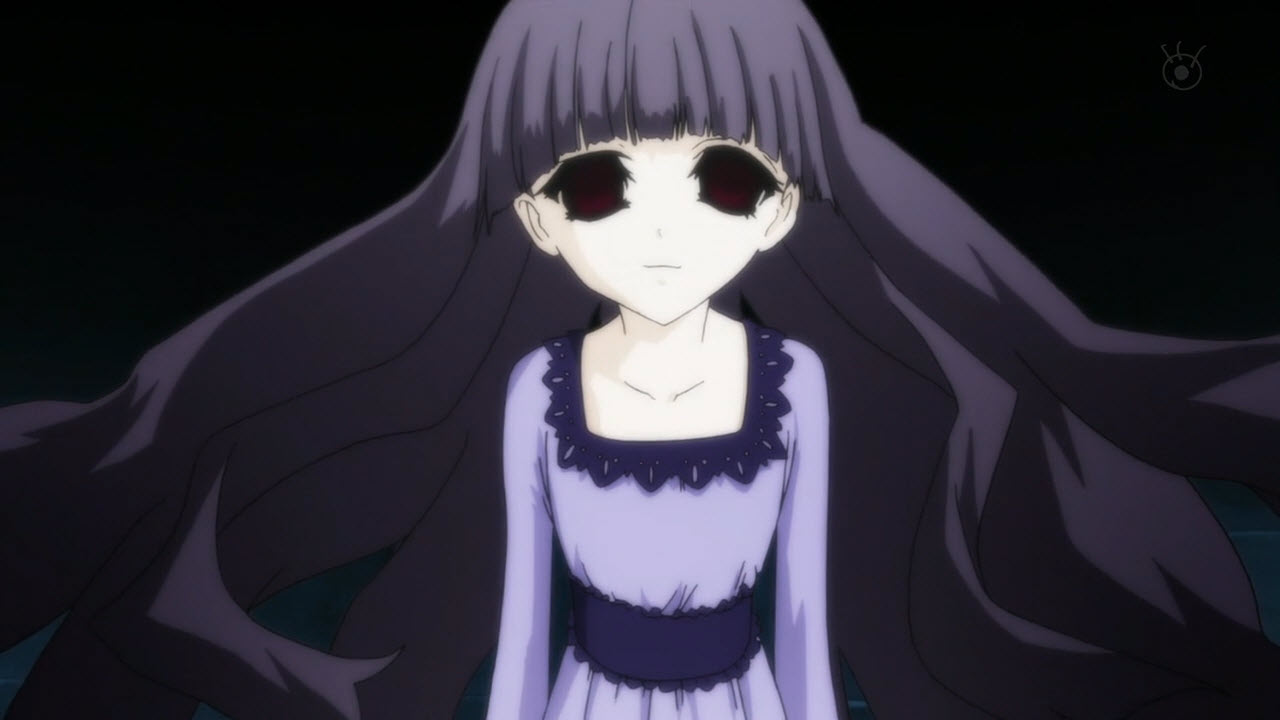 Vampires have had quite a renaissance in the Western cinema lately with movies like ‘Twilight‘ (obviously) and even T.V series like ‘The Vampire Diaries‘. But when it comes to anime, these bloodsuckers have been here for quite some time now. But in recent years, even in the world of anime, these Vampires have lost their old dark ‘Dracula’ feel to them. Now we’ve simply got overly romanticized stories of cute vampire girls who are friendly and are simply reluctant towards drinking human blood. But somewhere amid all of these gentle vampire stories, we have ‘Shiki’ which brings in something very different and old school.

For a horror anime that revolves around vampires, ‘Shiki’ has a rather bright color scheme. But don’t be fooled by that as its plot gets really deep and dark with time. And though its storyline can be predictable at times, it is very well written and has a great structure to it. Another great thing about it is that unlike most modern Vampire tales, the bloodsuckers in this one are very similar to those in the classics where they wouldn’t be able to step out in the sun without getting burnt or be able to enter a home unless invited.

The biggest problem with ‘Shiki’ is probably its bold color palette that does not usually fit in with the vibe of the anime. But the amazing choreography of all the scenes is able to make up for all the colorful backgrounds and ridiculously diverse characters. Overall, ‘Shiki’ effectively gives an incredible throwback to classic horror films like ‘Bram Stoker’s Dracula‘ and is certainly one of the best Vampire anime out there. I would definitely recommend it to anyone who is sick of the modern overly dramatic tales of love that portray nothing but some good-looking vampires.

Shiki Season 2 Release Date: When will it premiere?

‘Shiki’ season 1 premiered on July 9, 2010 and came to an end on December 31, 2010. During this span, the anime aired a total of 22 episodes with each one of them being 22 minutes long. Now if we simply consider its year of release, the possibility of getting a new season can simply be dismissed by saying that it has been close to a decade now since its release. Some anime do get sequels even after 10-12 years but considering that it comes from a not so well-known studio, its revival seems very less likely.

Another big reason why ‘Shiki’ may never have a new season is that the anime has been adapted from a light novel series. The anime climaxes right where the light novel comes to an end. The light novel series also has had a manga adaptation that was continued much further. But since the anime was always loyal to only the light novels, it is clear that it has no source material left for further adaptation. So as of now, it seems like we’ll never get to see a renewed version of it but if we do get any confirmations regarding ‘Shiki’ season 2 release date, we will surely update it here in this section.

The English dub of ‘Shiki’ is available on Amazon Prime. You can also watch it on Crunchyroll with its original Japanese audio and English subtitles.

The plot of ‘Shiki’ is set in the small town of Sotoba where a string of seemingly unrelated deaths have left the population baffled. Some link the deaths to natural causes while others blame the intense heat of the summer but the one thing that is certain is that the elderly are being targeted. This comes to the notice of the Toshio Ozaki, the director of the only hospital in that town. He comes to the conclusion that this must be an epidemic but after consulting his best friend and the local priest, Seishin Muroi, he is convinced that there are other factors at play. During this time, a moving company can be seen delivering furniture to the long-abandoned castle at Sotoba at the dead of night, confirming that a new family is moving in there. Doctor Toshio makes note of this but seems unperturbed by this fact given that he already has a lot on his plate.

It is at this moment that Megumi Shimizu is introduced, along with her friend, Kaori Tanaka, both students at the local high school. Megumi has a crush on Natsuno Yuuki, another student in their school who hates staying at the small town of Sotoba and longs for a life in the city. He constantly rejects Megumi’s advances much to her disappointment and she can be seen stalking him continuously in order to get closer.

One day, tired of Natsuno’s antics, she heads up the hill in order to meet the new Kirishiki family at their castle. However, she does not return from the place much to the bewilderment of the townspeople who head out to search for her. They finally find her curled up and out of her senses in the woods near the castle and discover that she is suffering from anemia, probably caused by insect bites. Relieved to find her alive and breathing, they carry her back to the village where they expect her to recover in a couple of days. However, her condition deteriorates constantly and finally, she passes away a couple of days later, much to the bewilderment of her family and friends.

Toshio is shocked that a simple condition like anemia can take away Megumi’s life and pleads with their family to conduct an autopsy but they refuse. Her father is adamant that his daughter died of natural causes and that an autopsy would be desecration on her body. Defeated, Doctor Toshio signs the death certificate stating that a rare unidentified form of anemia killed the patient. The deaths only seem to pile up from here on. Toshio, seriously overworked, cannot get his head around the fact that his latest patients are even refusing to come to visit him despite suffering from lethal conditions. These patients are simply refusing to visit the hospital and Toshio needs to find a way around it fast, lest more people lose their lives.

He decides to visit the town councilman, Ishida, along with Seishin in order to gather more information about the deceased and finds out that 10 more deaths had been reported between Sotoba and Mizobe, the neighboring town, within a very short time frame. He fears an epidemic and quickly gets into action. He does his best to investigate the matter along with Ishida and Seishin and swears that he will get to the bottom of the mystery.

During this time, Natsuno can be seen sitting in his room but suddenly gets the feeling that Megumi is again stalking her. He already knew that she used to peek inside his room late at night but Megumi, having already passed away, feels a shiver up his spine. He quickly goes to the window and draws the curtains but still feels a looming presence at the back of his mind. No matter how much he tried to divert his attention from the window, he can still feel a pair of eyes on him watching him from the outside. The anime then goes on to show the actions taken by Toshio and the village in order to subdue the epidemic that has taken over them completely.

Yuuki/Koide Natsuno: Yuuki is a 15-year-old boy who is forced to live and study in Sotoba due to his parents wanting a change of life. However, he is extremely unhappy with such a boring life and longs to be back in the city where life is fast and happening. He also has a troubled relationship with his father, mainly due to the fact that his father refused to marry his mother and now he is stuck having to use his mother’s surname. He feels that this is outside of the laws as stated by society and wishes that his parents would take the same more seriously. He has a cold exterior and strives to stay away from other people who he doesn’t consider friends. As a result, he found Megumi’s advances quite frustrating and felt that it was a violation of his privacy; but it is not entirely clear whether his perceptions towards her changes after she passes away.

Toshio Ozaki: The director of the only hospital in Sotoba, Toshio is left dumbfounded after witnessing a string of deaths in a very short time period, particularly the death of Megumi. Megumi was suffering from anemia, a condition while dangerous, is not lethal in most cases. However, as Megumi passes away, he is forced to spring into action if he wants to have any chances of saving his hometown. Toshio, along with Ishida and Seishin, quickly start investigating the deaths in order to ascertain their causes and put a stop to it.