10 TV Shows You Must Watch if You Love Chernobyl 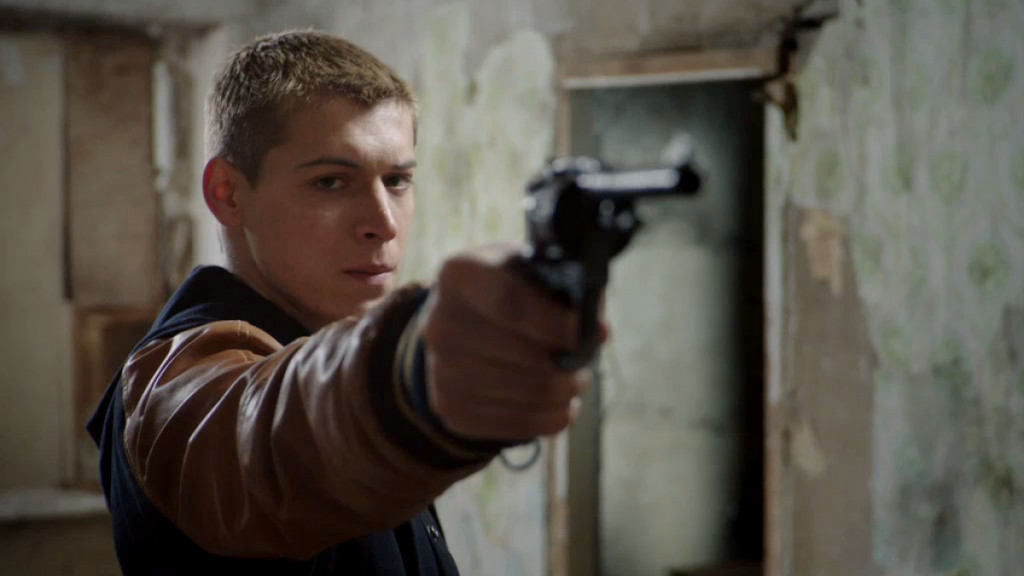 The Chernobyl Nuclear disaster that happened in the erstwhile USSR is the worst nuclear accident to have happened in human history. A failed safety test resulted in uncontrolled nuclear fissions which caused massive destruction. This disaster is dramatized in a miniseries created by Craig Mazin, titled ‘Chernobyl’. The series is co-produced by HBO and Sky. It is a tribute to those brave men and women who gave up their lives for the greater good of humanity. The show received immense critical acclaim; on the review aggregator site Rotten Tomatoes, it has a rating of 100%. If you’re looking for similar shows that dramatize important events in human history, then you have come to the right place. Here’s the list of best shows similar to ‘Chernobyl’ that are our recommendations. You can watch several of these series like ‘Chernobyl’ on Netflix, Hulu or Amazon Prime. 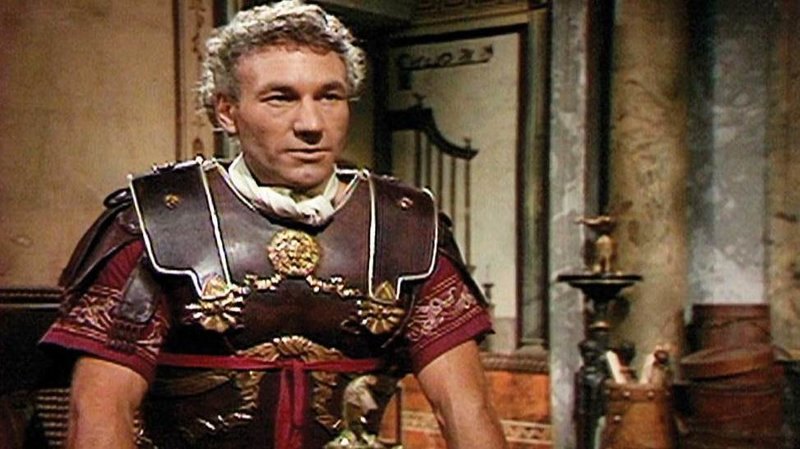 Narrated by The Roman Emperor Claudius, this series chronicles the story of the early Roman Empire. The story starts with how Livia, the wife of the first Roman emperor, used murder and deceit to set her son on the Roman throne. The murder and deception even went on during the reign of Tiberius, her own son. Then we are made witness to how the Praetorian Prefect Sejanus hatched a conspiracy against the Roman emperor. The perverted and remorseless ruler Caligula’s rule is shown next, followed by how his uncle Claudius got entrapped into making way for the mentally unstable Nero to sit on the throne. Despite receiving negative reviews from critics, the series was a huge hit upon its release. It also ended up winning three BAFTA Awards — Derek Jacobi for Best Actor (TV); Siân Phillips for Best Actress (TV); and Tim Harvey for Best Design (TV). BFI even ranks the show 12th on their list of 100 Greatest British Television Programs. 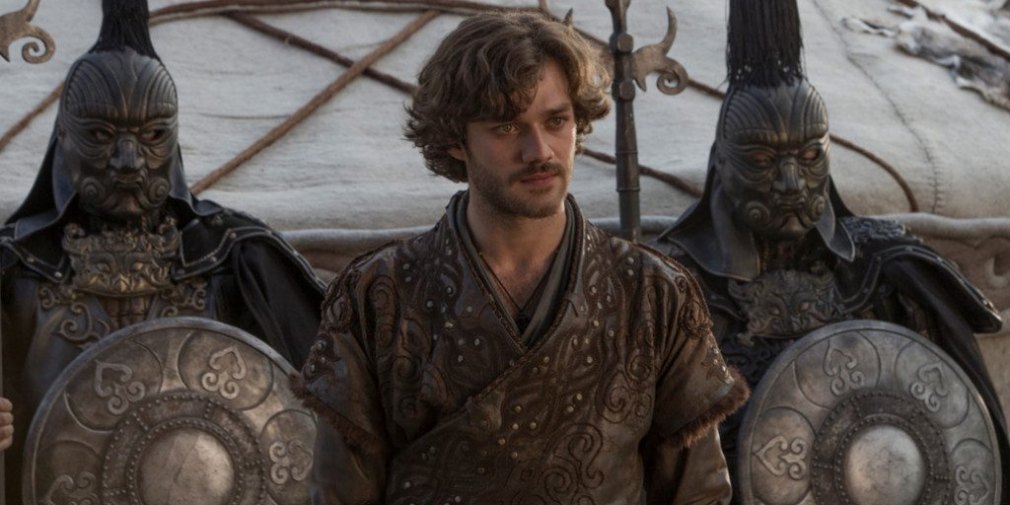 The famous Italian merchant and traveler Marco Polo had various experiences all over the world as he went to trade his goods and learn about other cultures. This series shows us his life during the time he visited the court of the famous Mongol ruler Kublai Khan. Lorenzo Richelmy plays the character of Marco Polo while Benedict Wong is cast as Kublai Khan. The show was received poorly by critics. 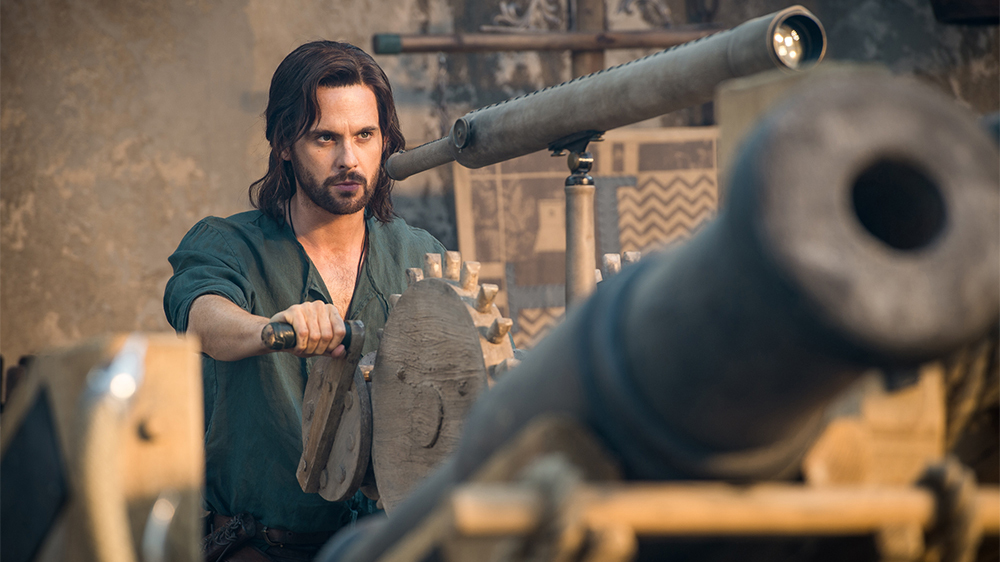 Leonardo da Vinci is one of the most fascinating men in human history. He was a polymath expert in numerous fields and is still remembered as one of the greatest geniuses ever. This series is a fictionalized account based on Da Vinci’s early life during the Renaissance. The constant flow of ideas in his mind took a toll on his psyche and we see how troubled Da Vinci gets as a result. An antagonism he has against his father makes him work for the House of Medici and get involved in a scheme to annex Florence. Meanwhile, Da Vinci gets busy finding a spy within his side’s ranks who constantly leaks information to the enemies — the Pazzi family and the Roman Catholic Church. Many of the things that Leonardo invents are also featured in the show. The first two seasons of the show received positive critical acclaim. 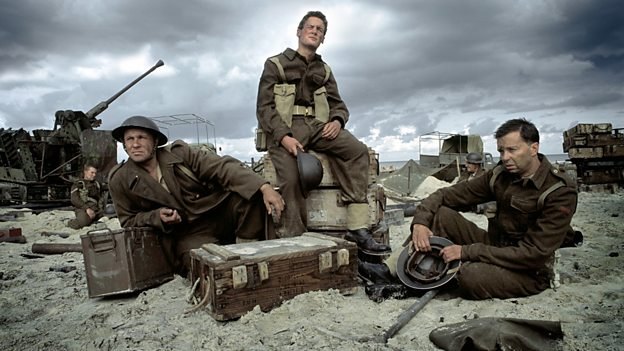 ‘Dunkirk’ is a BBC miniseries which shows in details the Dunkirk evacuation of British soldiers during World War II. The series is divided into three episodes titled ‘Retreat’, ‘Evacuation’, and ‘Deliverance’. The first episode shows how the heavy firing from the Axis side caused huge damage to the British troops at the Port Of Dunkirk and how the political negotiations worked under the supervision of the newly-elected Prime Minister of Britain, Winston Churchill. The second episode depicts how the British soldiers were evacuated from the area with the help of civilians, and finally, the last episode is devoted to how the soldiers finally reached home. The series was praised by critics for its vivid description of the entire process and the show even managed to win accolades from BAFTA and the Royal Television Society. 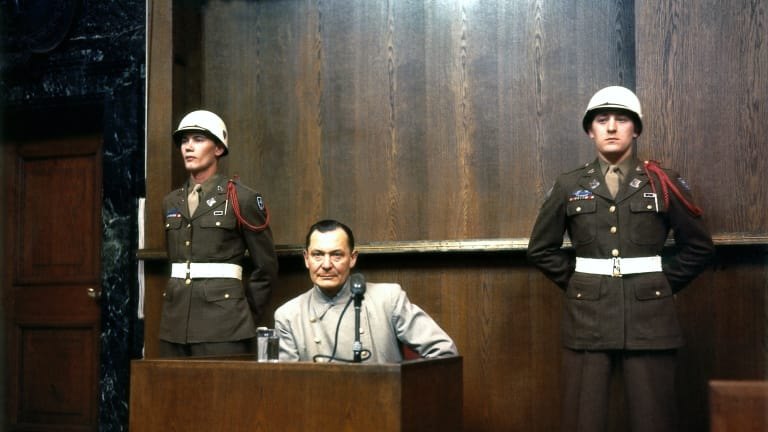 This 3-episode miniseries focuses on the trials of three high-ranking Nazi officials after the Second World War. These three officials were Albert Speer, Hermann Göring, and Rudolf Hess. The show uses a docudrama format, with some archival footage and also dramatizes certain important events. All three episodes of the series received critical acclaim, with praise particularly directed towards the editing. 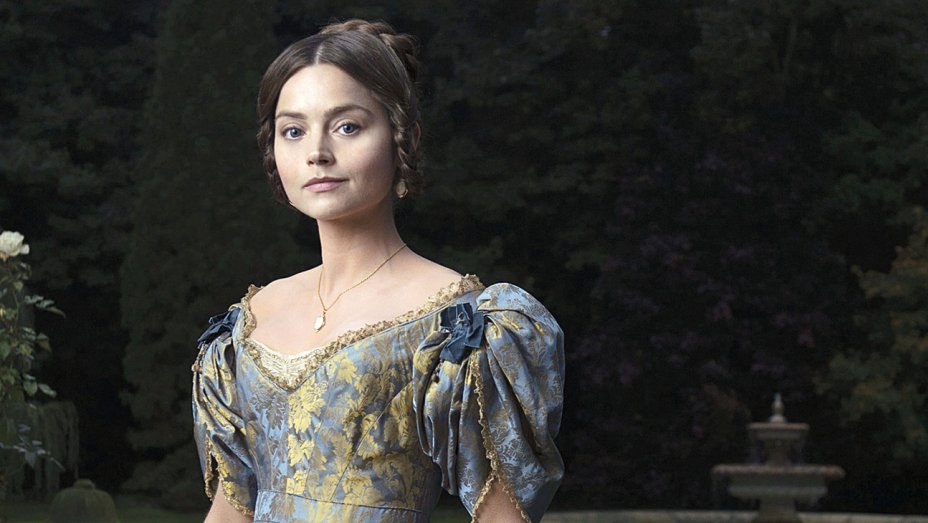 ‘Victoria’, as the name suggests, dramatizes the life of the second-longest reigning monarch of England, Queen Victoria. The series is created and mostly written by Daisy Goodwin. The first season focuses on how the queen slowly gets a grip on the empire after becoming the ruler, her romantic relationships and eventual marriage with Prince Albert. In the second season, we see her juggling between the roles of a queen, a mother, and a wife. She also starts diplomatic relationships with France. The third season sees Prince Albert getting his son Edward VII ready to take on the role of the monarch with some other subplots also coming into the fray. Jenna Coleman plays the role of Queen Victoria in the series. The show met with critical acclaim, but some of them also pointed out that the show often turns into a soap opera. 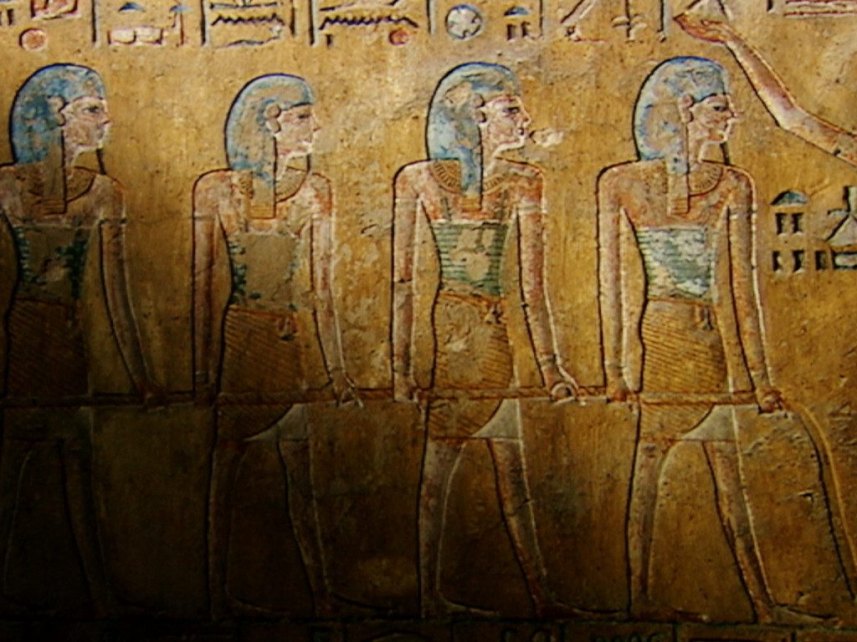 The ancient history of Egypt is quite fascinating and has interested us for a long time. This series dramatizes the most important events in the history of Egyptology and is a fascinating account of how the most important aspects of Egypt’s history were discovered in the first place. The series is divided into a total of three parts — ‘Howard Carter’, ‘The Great Belzoni’, and ‘Champollion’. In the first part, we see how the famous archaeologist Howard Carter discovered the tomb of the famous Egyptian Pharaoh, the ‘Boy King’ Tutankhamen. The second part tells the story of Giovanni Belzoni, who was a circus performer and engineer. He got involved in archaeology and ended up discovering the tomb of the great ruler Ramses. 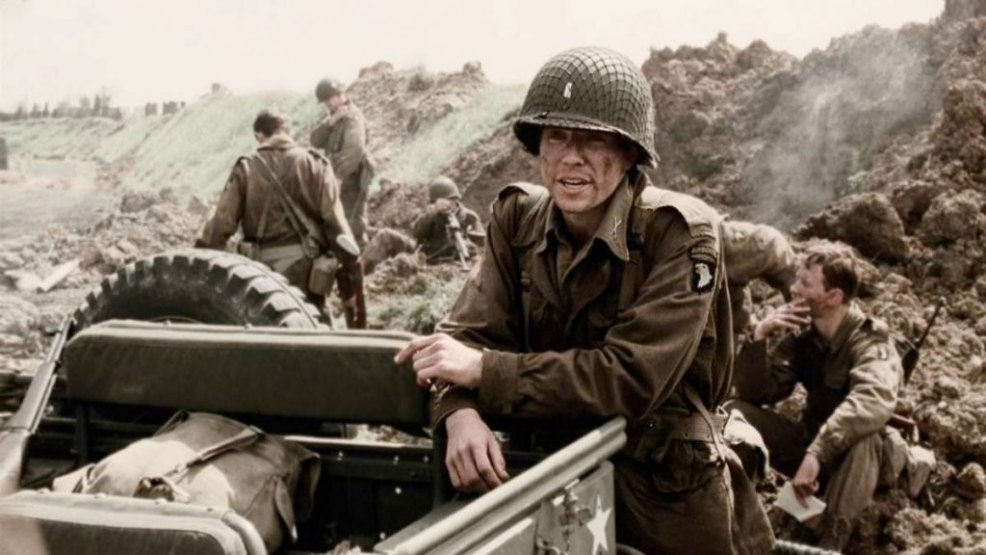 Stephen E. Ambrose’s book of the same name is the main inspiration behind this war drama miniseries. Tom Hanks and Steven Spielberg served as executive producers of the show. It follows the story of 101st Airborne Division’s 506th Parachute Infantry Regiment’s 2nd Battalion which used the nickname the “Easy” Company. The show focuses on Easy Company, from their days of training to their participation in the battle in Japan, and right until the end of World War II. In WWII, the unit participated in some of the most major events like airborne landings in Normandy, Operation Market Garden, and Siege of Bastogne.

The protagonist of the show is Major Richard Winters and we see him struggling to overcome the harsh conditions of war while trying to keep his men away from danger. Some events are fictionalized for dramatic effect, but the poignant tale of soldiers, the intense mental and physical trauma that they go through during war become the central theme of the show. Tom Hanks and Erik Jendresen wrote the story with special inputs from Spielberg. The series received huge critical acclaim and won the Golden Globe Award for Best Miniseries or Television Film along with 7 Primetime Emmy Awards including Outstanding Miniseries. 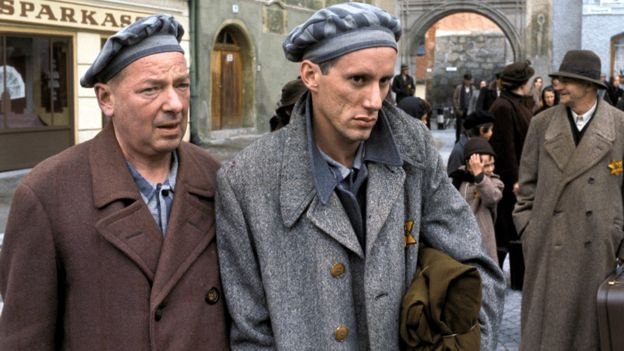 Written and created by Gerald Green, ‘Holocaust’ is a story of two German families during the Second World War — one of them Christians, and the other one a Jewish family. The series is divided into four parts. The Christian family is headed by a man called Erik Dorf. Having no job, Erik decides to join the Nazi Party for some money. He ends up being a well-respected leader and member of the SS. His influence made him a close aide of the high-ranking Nazi Party leader Reinhard Heydrich. The Jewish family’s patriarch is Dr. Josef Weiss. The story of the two families is portrayed throughout the run of World War II, and it finally reaches a point when Erik becomes responsible for the life of one of the Weisses, a family he knew since he was a child. The show was critically acclaimed and even received the Emmy Award for Outstanding Miniseries. 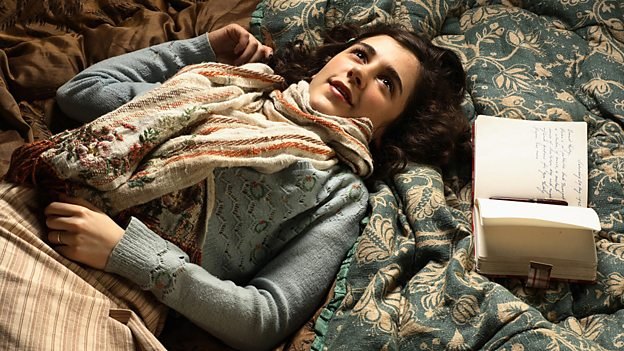 Anne Frank’s autobiography written during the Second World War is one of the most harrowing documents of human suffering. Deborah Moggach adapted the writings of Frank for the series. The show portrays the lives of the Frank family during World War II. The family almost survives the war and escapes the wrath of the Nazis, but are finally caught in 1944 and killed in concentration camps. Anne remains one of the most talked about Holocaust victims ever. The series received unanimous critical acclaim.