Who is T-Rex on ‘The Masked Singer’? Clues and Guesses 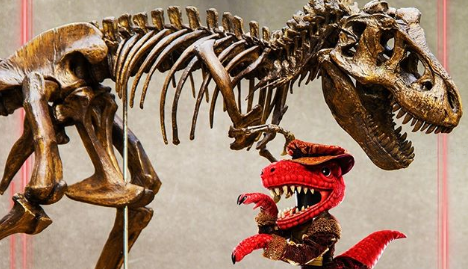 Among all the Group C performers in ‘The Masked Singer‘, one that has stood out has been T-Rex. This is primarily because the outfit is pretty different from what someone would expect of a dinosaur-themed attire. However, this has only been one of the many things that have thrown the fans off.

There are not many clues available about T-Rex yet, which has left viewers scratching their heads about who might actually be behind the mask. Curious to find out? Read on to know all the clues and guesses surrounding the identity of the character.

T-Rex’s clues mostly stem from the performer’s outfit. Although adorning a dinosaur mask, the performer’s outfit is strikingly medieval. One can see that it is inspired by the Renaissance, and the costume has boots, tights, and a hat. If one is familiar with Shakespeare’s plays and characters, there is a strong resemblance there.

In fact, you can check out the post of T-Rex below. Some fans have wondered that T-Rex’s outfit suggests the performer being an actor rather than a singer.

Going by the fact that T-Rex is likely to be an actor, many fans have posited that Tom Hiddleston might be wearing the costume. The reference to Shakespeare adds up here because Hiddleston is British. However, the actor has quite a high profile and is not likely to be seen on ‘The Masked Singer’ stage.

Since the outfit also hints at a link to the theater, some fans have guessed the performer has experience in drama. Many have pointed at Neil Patrick Harris, whose sense of humor might see him land up on the show. Others have squarely focused on the T-Rex being the major clue. As a result, some have drawn links to ‘Jurassic Park‘ saying it could be Jeff Goldblum, while some have stated it might be Ben Stiller.

Naturally, in the second case, the T-Rex skeleton from ‘Night at the Museum‘ has been connected to the outfit. However, some fans have come to a different conclusion, from the sneak peek at the performance. You can check it out below.

Many believe it to be Simone Biles, the gymnast. While several fans have expressed excitement at seeing her perform, some have been quick to point out that Simone is likely to have been too busy preparing for the Olympics to have made time to film for the show.

Going by the incredibly energetic performance and small stature, there have been guesses made that Ariana Grande might be behind the outfit. You can check out the tweet from a fan, below.

Some have even made wild guesses about it being Channing Tatum or Mike Shinoda. However, both of these guesses are quite unsubstantiated, and not likely to be correct. You can check out a tweet below, where a fan feels it might be the former Linkin Park member.

Holding out hope that the T-Rex in Masked Singer season 3 is @mikeshinoda. I mean, if he were on the show, we’re agreed that would be the perfect costume, right?

Lastly, one fan has guessed that T-Rex might be Shakespeare Approves!. The personality has a twitter account and is known for performing improv works of Shakespeare. However, we are unsure how much of a celebrity this personality is, to warrant a position in the show. Nonetheless, you can check out the fan’s tweet below.

In conclusion, T-Rex’s outfit has thrown fans off, as has the sneak peek of the performance. That being said, we are confident that we will be able to narrow down on the guesses and provide more accurate deductions once we see T-Rex get up on stage and perform. Once the clue packages are provided, it will become much easier to understand who might be behind the mask.