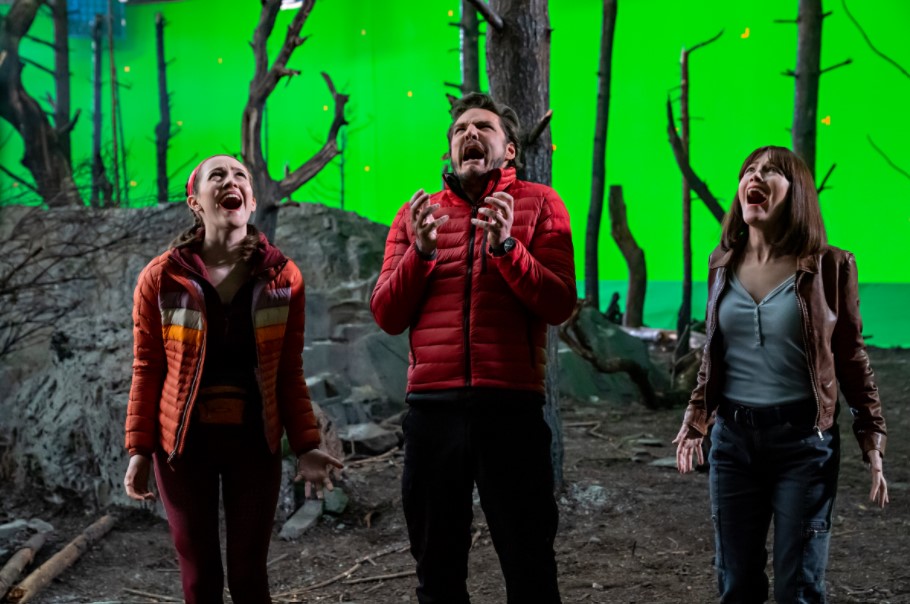 Director Judd Apatow’s meta-comedy movie ‘The Bubble’ is an exciting blend of humor and pop culture that shines the light on the difficulties of producing and filming a blockbuster movie during the pandemic. The movie follows the colorful cast of self-obsessed actors who arrive at a secluded hotel in England to film the sixth movie in the action franchise ‘Cliff Beasts.’ However, after they start filming the movie, the cast faces unprecedented professional and personal challenges that derail production. Moreover, the studio’s expectations put pressure on the crew as the set environment becomes problematic.

The film-within-a-film narrative delivers some hilarious commentary on Hollywood’s studio culture, especially concerning blockbuster franchises. Since post-credit scenes are an integral part of modern-day franchise filmmaking, it is no surprise that there is a similar bonus scene attached to ‘The Bubble.’ If you are seeking some explanation about the movie’s mid-credits scene, here is everything you need to know! SPOILERS AHEAD!

After struggling to complete filming due to the restriction of the pandemic, the cast of ‘Cliff Beasts 6‘ decides to work together to escape from the hotel. The studio’s treatment and the announcement that they will be soon starting production on a seventh installment proves to be a disappointment for the cast. Led by Carol and galvanized by Dieter’s near-death experience, the cast members formulate a plan to abandon the project and head home. In the end, the cast members succeed in the quest and leave the film unfinished.

In the final moments of the film, set two years later, the cast members of ‘Cliff Beasts 6’ reunite for the premiere of a documentary film that recounts their experiences during the tumultuous production of the movie. The behind-the-scenes documentary receives glowing reviews from critics. The credits roll, accompanied by brief shots of the cast at the premiere. However, viewers are treated to a mid-credits scene shortly after the initial credits. However, the scene is not a tease for a potential seventh ‘Cliff Beasts’  film, nor does it add any narrative content to the movie.

In the mid-credits scene, set after the cast members escape the bubble in a helicopter, Gavin, Pippa, and Darren discuss whether they can finish the movie without the cast. Gavin remarks that it will be difficult since they did not shoot the opening scenes. However, Pippa points out that the audience of such movies only cares about a good ending. The scene ends with Darren remarking that they tried making a movie during a difficult time. Thus, he hopes that people judge them not for the quality of the film but for their effort.

The scene highlights that ‘The Bubble,’ despite its inconsistent and often incoherent narrative, is meant to distract the audience from the hardships of their day-to-day life. Darren’s remarks serve as a meta-statement that underlines the importance of films that provide viewers with escapism and seek to entertain rather than be thought-provoking reflections of society and day-to-day lives.

Read More: Is The Bubble Based on a True Story? Is It Scripted?