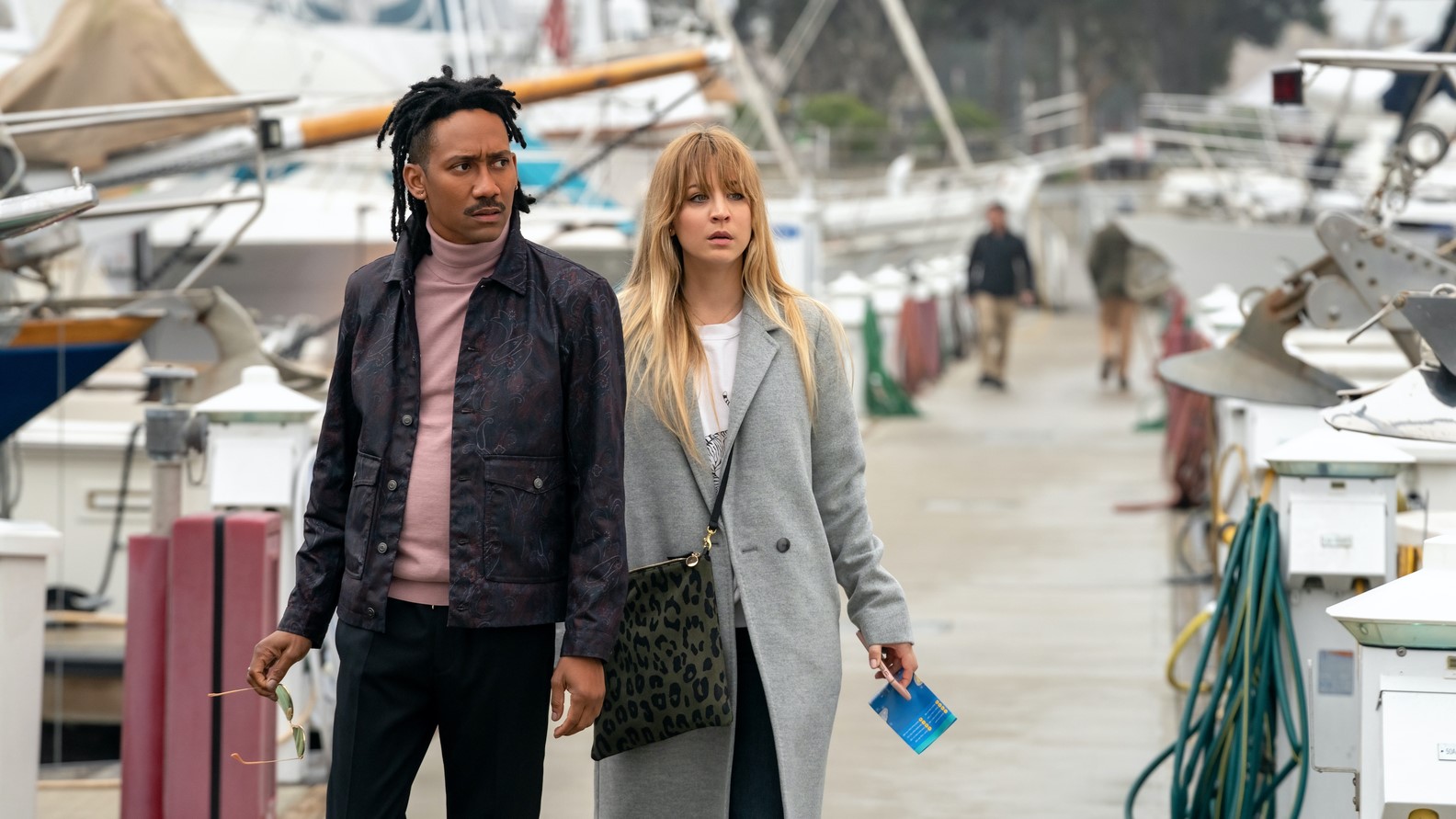 After the big revelation about Grace in the penultimate episode of ‘The Flight Attendant,’ the season 2 finale, titled ‘Backwards and Forwards,’ dives deep into the mysteries introduced in the previous episodes and provides solutions. The second season finale encapsulates Cassie’s (Kaley Cuoco) recent life, where things have pivoted so out of control that she is forced to leap from one crisis to another. Like the first season, season 2 ends by neatly wrapping up almost everything. Here is everything you need to know about it. SPOILERS AHEAD.

The finale begins in Newark. Megan arrives at the airport and parks her car. Before leaving, she threatens the North Korean agent, who is apparently still alive, that the next time he comes after her family, she will end his. Although she briefly fears that she has been recognized by the customs agents, she boards the plane to Los Angeles without any issue. Meanwhile, Cassie is still traumatized by Grace shooting herself in the head in front of her. In the Mind Palace, a twisted version of her continues to goad her to kill herself. She finds Max and Annie and reveals that even though Ben and Shane were stabbed, they will be alright. Her friends tell her that the police are apparently on to Gabrielle and Esteban. Amidst all this good news, Cassie learns from Dot (Cheryl Hines) that Grace wasn’t working alone. There is another woman out there who also has pretended to be Cassie. Before she leaves the hospital, Megan arrives. Cassie excuses herself to Dot and goes to speak to Shane.

Shane apologizes to Cassie for thinking that she was crying wolf. Before she leaves the hospital, Cassie ensures that Shane will at least hear Megan out. Cassie also gives Megan Diazes’ laptop to hand it over to Shane. Max and Annie took it when they broke into Gabrielle and Esteban’s home. It has a lot of sensitive information about North Korea. Later, Shane arranges for Megan and her family to go into the witness protection program.

Davey’s partner Rick calls. Davey apparently messaged him, claiming that he had let Cassie down and couldn’t come home yet. Cassie recalls that she did receive some weird messages from her brother. On their way to the CIA office, Cassie and Dot get stuck in the traffic. The latter suggests that they should go to her apartment, which is nearby. Knowing that she has blood in her hair and needs a shower, Cassie agrees.

The Flight Attendant Season 2 Finale Ending: Who Sent the View-Master? Why?

Once at Dot’s apartment, Cassie goes into the bathroom and finds a bottle of Santal 33 hidden behind the mirror. And every piece of the puzzle suddenly falls into place. The doppelganger killer wore Santal 33. Cassie realizes that Grace was in the military with Dot. The former had one half of a photo, taken in Al-Fallujah, while Dot does the other. Moreovet, as the regional director, Dot had the clearance to alter Cassie’s CIA psychological evaluation. Cassie calls Max and Annie and asks the former to hack into Dot’s alarm system and set it off remotely.

Cassie tries to run away as the alarm goes off, but Dot stops her. The latter reveals that Grace was just one of the operatives she used and discarded. She killed Will because he was blackmailing her. Cassie realizes that Dot was the one who sent her View-Master, so she would be in the locations where either Dot or Grace committed murder and could be implicated. Ultimately, Ben sends the officers that accompanied Cassie and Dot up before Dot can have probable cause to shoot Cassie, and they arrest Dot. Ben later reveals that Dot was selling access to CIA records for years.

Who Is Jenny? Why Does She Try to Kill Cassie?

At the start of the season, Jenny (Jessie Ennis) is introduced as one of the members of Cassie’s AA group. She seems to have an interest in Cassie’s past. She claims that it is because she has a crime podcast. This is a lie. She found out about Buckley Ware or Feliks (Colin Woodell) and became obsessed with him. When she went to meet him, Buckley saw an opportunity and used it. He turned Jenny into a weapon against Cassie. And Jenny was very much a willing participant.

When Cassie goes to pick Davey up from Jenny’s house, she finds him to be drugged. She then sees the altar that Jenny has built for Feliks. As Jenny comes after her with a hammer, Cassie runs away and hides. It is only after coming to terms with herself in the Mind Palace, she gains the courage to face off against Jenny. By then, Davey has woken up, and he knocks Jenny out.

Do Max and Annie Get Married?

Yes, Max and Annie get married in the final episode of season 2. They have been engaged throughout the season, though Annie seems somewhat less inclined to announce it to everyone. It’s not that she doesn’t love Max but has a very cynical view of engagements, diamonds, and marriage. That changes when Gabrielle takes her engagement ring. Annie gets it back after knocking the bounty hunter out with a taser.

Cassie travels to Las Vegas, Nevada, to attend their wedding, though she doesn’t catch the bouquet of flowers when Annie throws it. Cassie also apologizes to her mother. And for the first time in a while, the two Bowden women have a normal, non-toxic conversation.