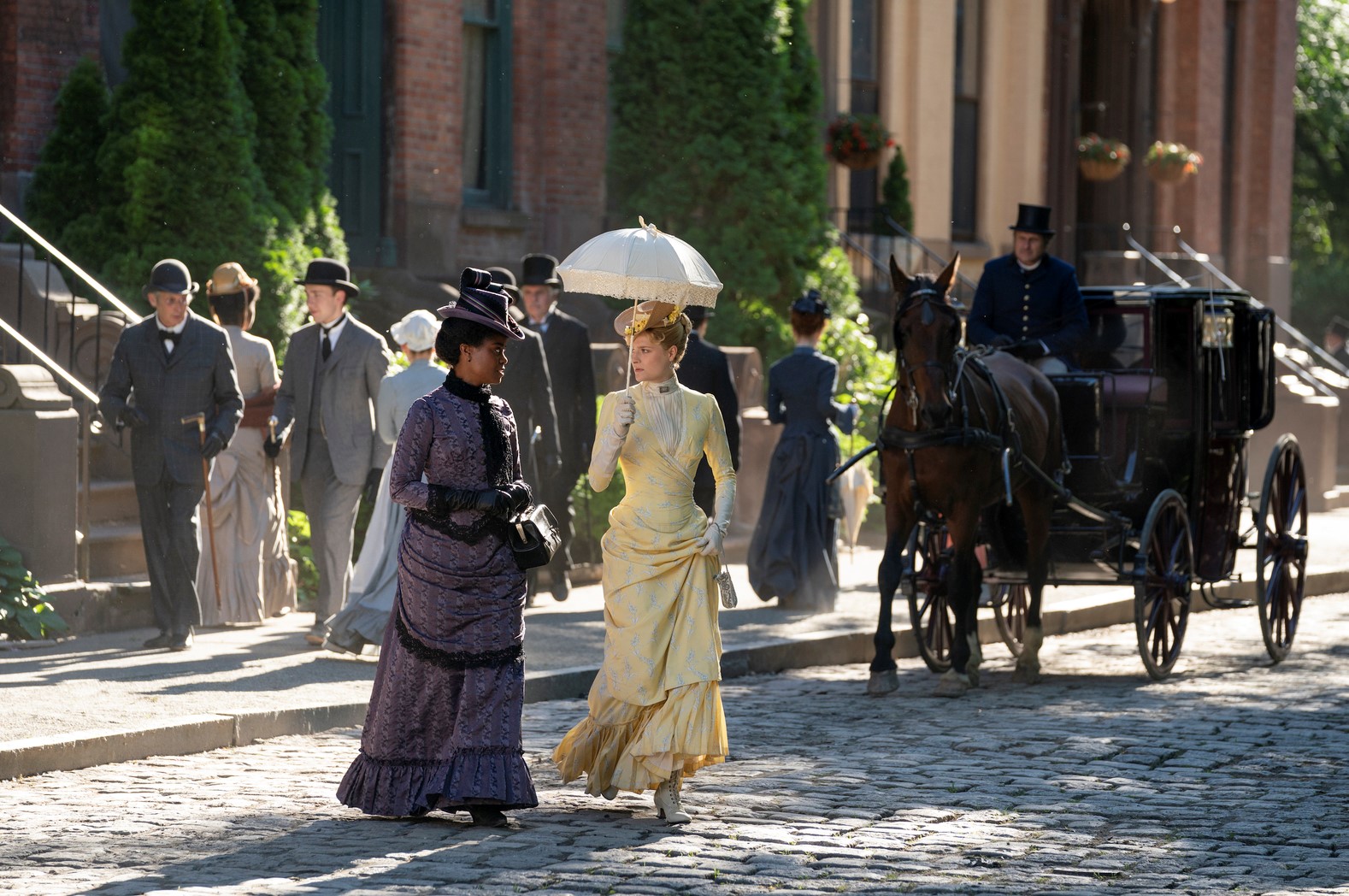 In ‘The Gilded Age’ episode 3, George Russell (Morgan Spector) faces an unprecedented challenge at work, as the city aldermen decided to go back on their deal with the railway tycoon. Oscar (Blake Ritson) maintains his secret tryst with John Adams while actively pursuing Gladys. A man from Ada’s (Cynthia Nixon) past returns to seek her affection, but he just might have ulterior motives. Tom Raikes (Thomas Cocquerel) proves that he has a bold spirit. Meanwhile, Jack Treacher invites Bridget to go to a Magic Lantern Show. Here is everything you need to know about the ending of ‘The Gilded Age’ episode 3. SPOILERS AHEAD.

Episode 3 begins as the Brook household is abuzz with speculations about Clara Barton, a real-life nurse who established the American Red Cross, who is set to give a speech at Aurora Fane’s home. Ada and Marian (Louisa Jacobson) attend the gathering and run into Cornelius Eckhard III, an acquaintance of Ada from when they both were young. Cornelius wanted to marry Ada, but his advances were ultimately rejected. Everyone except Agnes (Christine Baranski) believes it was rejected because the Eckhards had neither money nor social status.

However, as Agnes reveals to Cornelius, her father found out that he had described Ada as his “meal ticket.” Given his current course of actions, she correctly deduces that Cornelius is trying to slither back into Ada’s life and clarifies Ada’s financial situation to him, which prompts him to leave abruptly.

Troubles brew for George Russell and his business as the New York City aldermen decide to rescind the law for a second rail station in the city. He and Bertha (Carrie Coon) prove why they are an exceptional match when he seeks her permission to go to war with his full might, and she gives it, knowing that if he fails, they will lose everything. These two people are incredibly steadfast in their love and belief in each other. This is truly a marriage of equals, or rather as equals as the time they live in allows them to be. Bertha tells her husband that they once made a fortune together, and they can make it again if needed.

As Russell’s problems become apparent, Oscar becomes visibly disappointed as he has to find some other rich man’s daughter and forget the “perfect” Gladys. Peggy gets a letter from the Christian Advocate, a white publication interested in publishing one of her stories. However, when she attends a meeting with the publisher, she encounters even uglier faces of racism and discrimination than she is used to in her everyday life and ultimately decides not to let any of her stories be published on the Christian Advocate.

Yes, Mr. Morris is dead. Mr. Morris, Mr. Fane, who is also revealed to be a city alderman; and their colleagues walk back from their promises to George and rescind the law for a second station in New York. By George’s own admission, he hasn’t been expecting this calculated move but is not surprised by it. The aldermen bought company shares on margin, passed the law, and made a hefty profit. Now, they have sold the shares short and canceled the law with the belief that the value will plummet. They plan to buy the shares again when the price reaches as low as it can get, making two or three times the money they had initially earned.

What they haven’t counted on is how driven and ruthless George Russell can be. He puts his own family’s future in jeopardy to buy his company shares as soon they become available on the market. Although he intends to keep it a secret, everybody seems to know about it. Soon enough, the aldermen face financial ruins. They come groveling to George’s office, pleading him to have mercy. In Mr. Morris’ case, it’s quite literal. But it doesn’t sway George. Mr. Morris also sends his wife to mend things with Bertha, who rebuffs the attempt. Facing complete bankruptcy, Mr. Morris commits suicide, not knowing that George ultimately decides to grant him and others mercy.

In 1882, the Statue of Liberty had been neither dedicated nor assembled yet. Raikes and Marian meet in Madison Square by Lady Liberty’s hand clutching the torch. There, on a Monday evening, Raikes proposes to Marian. However, she doesn’t give an answer in response. He eventually leaves, asking her to contact him as soon as she has an answer. Marian is clearly fond of Raikes. He is a man who showed her incredible kindness when he didn’t have to.

However, fondness doesn’t necessarily imply love. She clarifies her feelings for Raikes in this episode while being confronted by Agnes, who calls Raikes an “adventurer,” a quality that was evidently ill-suited in men seeking the hands of Gilded Age upper-class women. Marian says that she doesn’t intend to marry him but wants to keep him as part of her life, much to her aunt’s disapproval. The way things are now between Marian and Raikes, she will probably reject his proposal.

While she does seek to challenge the society she is born in, she acknowledges that she has to live by its rules. She is a penniless woman with only her family name as her capital. She might come to realize that she has to use it properly and not associate herself with a lawyer, no matter how ambitious, well-spoken, and handsome he is.

Read More: Who Is Mrs. Astor? Is She Based on a Real Gilded Age Socialite?