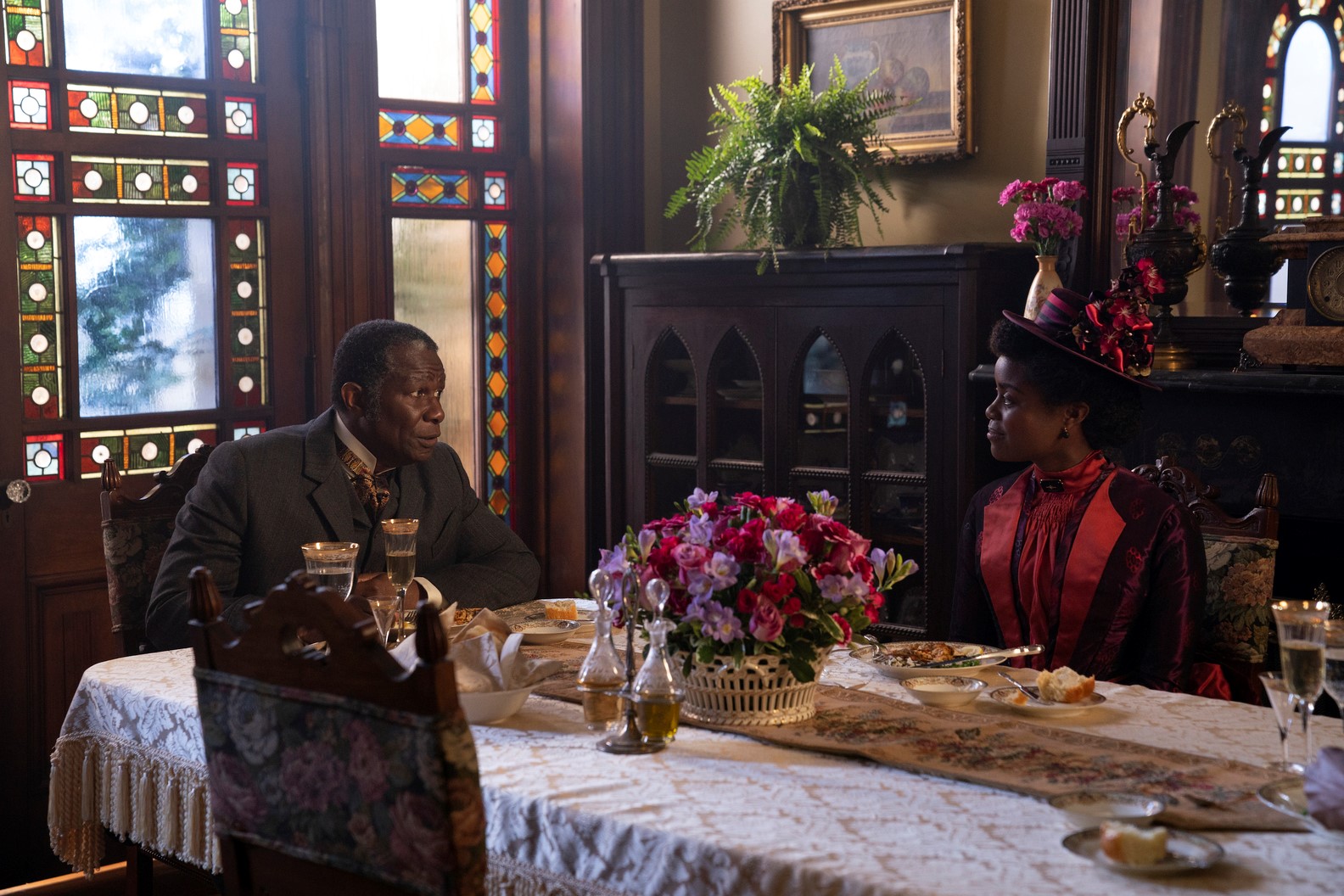 In its fourth episode, titled ‘A Long Ladder,’ ‘The Gilded Age’ deals with a failed seduction, inherent prejudice, and ambitious social climbing. Peggy meets T. Thomas Fortune and is hired at the New York Globe. George helps the Fane family get out of the financial situation under the condition that Aurora will help Bertha (Carrie Coon) become part of the New York polite society. Marian shows up unannounced at the Scott household with a pair of old shoes and is justifiably called out for it. The polite society is abuzz with the news of a performance at the Academy of Music, hosted for Ms. Barton’s charity. Marian attends the performance and is pleasantly surprised by who she runs into. Here is everything you need to know about the ending of ‘The Gilded Age’ episode 4. SPOILERS AHEAD.

The episode begins as George and his employees celebrate the fact that their new station will now be built while Mrs. Morris buries her husband. Even at the funeral, there are whispers around her reproving Patrick, who has committed suicide, being buried on the consecrated ground. George later meets up with Mr. Fane and discusses truce, much to the relief of the other man. Mr. Fane later speaks to his wife and makes her understand why they must be Russells’ proverbial chaperons into the polite society. As such, Aurora tells Bertha that the best way to enter her family in the top tier of New York’s privileged class is to meet Ward McAllister, whom she describes as Mrs. Astor’s henchman. Aurora also invites Bertha to accompany her and her husband to listen to John Knowles Paine’s conducting Boston Symphony Orchestra at the Academy of Music.

Meanwhile, T. Thomas Fortune of the New York Globe buys one of Peggy’s stories and asks her to write a 200-word article on political affiliation without voting rights. Later, Peggy visits her parents to inform them of her good news. This is when Marian shows up unannounced with a pair of old shoes, believing that they will be a good gift. Her surprise at the affluence of the Scott family is a sign of prejudice in itself. She might not be an outright racist but has these preconceived notions of the African American community, which end up guiding her actions toward Peggy and her family. And Peggy rightfully calls her out on this.

Ms. Turner attempts to seduce George by sliding into his bed one night, but things don’t go according to her plans. She categorically misjudged how much George is devoted to his wife. The show once more enunciates this is a marriage of equals, for the 1880s at least. George is not going to jeopardize that by having a mistress. Moreover, he doesn’t seem like a man who is majorly motivated by sex.

It is revealed that Bridget was abused as a child, and she holds her mother responsible for it. Oscar shunned the Russell family after learning that they might be losing everything after it was declared that the bill for a new station in New York would be rescinded. Now, with things back on track, he tries to get himself invited to their house and finds that the Russells have noticed his absence during their difficult times, and his door to their home has been barred.

The Gilded Age Episode 4 Ending: Was the Academy of Music a Real Opera House? Was John Knowles Paine a Real Composer?

In the final sequence of episode 4, Marian goes to witness John Knowles Paine’s conducting the Boston Symphony Orchestra along with the Fanes. Bertha is also in their box. Raikes (Thomas Cocquerel), who is in the box next to them, spots Marian and comes to greet her. Given how fanatical the polite society is about controlling people’s access to it, his presence there surprises everyone. However, Bertha, who has struggled against this mindset for a long time, is clearly impressed.

Yes, the Academy of Music was a real opera house. John Knowles Paine was a real composer. And Boston Symphony Orchestra is a real orchestra, and it still exists. The Academy of Music was situated on the northeast corner of East 14th Street and Irving Place in Manhattan. It became operational in 1854 and had a hall with seating arrangements for 4,000 people. At the height of its prominence, the New York elites used to flock there to listen to opera. In 1886, it switched to hosting vaudeville. It was ultimately demolished in 1926, and the Consolidated Edison Building came up in its place.

John Knowles Paine was a renowned American composer. He has the distinction to be the first composer born in America to garner massive popularity for large-scale orchestral music. Known as one of the composers of the Boston Six, Paine served as the Boston Symphony Orchestra’s first guest conductor. However, the performance depicted in the show seems to be fictional. While Paine performed with BSO several times in 1882, their first performance at the Academy of Music took place in 1900.