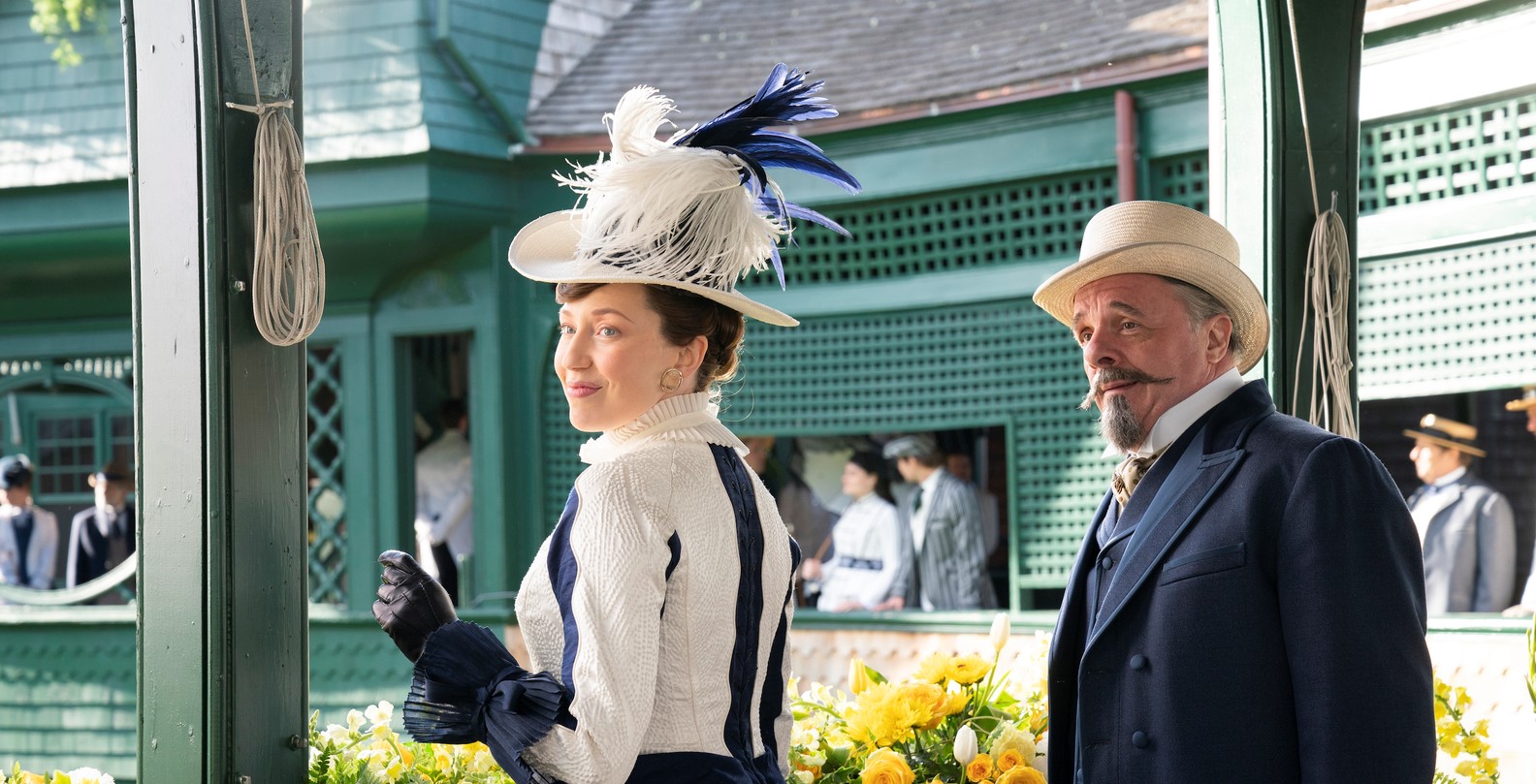 In the penultimate episode of its first season, ‘The Gilded Age’ reveals the truth about the accident in Millbourne, Pennsylvania, and the letter sent from George’s office. Marian (Louisa Jacobson) makes a decision that is bound to have long-term consequences for herself and her family. Armstrong discovers certain things that Peggy (Denée Benton) has withheld about herself and tells their employer. Bertha visits Newport with her children as the day of the ball approaches. Here is everything you need to know about the ending of ‘The Gilded Age’ episode 8. SPOILERS AHEAD.

Episode 8, titled ‘Tucked Up in Newport,’ begins as George meets with Clay and his lawyers. They are nowhere near to finding out who is responsible for the letter. Soon, the trial will begin, and if George doesn’t have the required evidence by then, he can potentially end up in jail. George is clearly agitated, but he and Bertha keep things running. Gladys and Carrie prepare for the upcoming ball, hoping that they will find some freedom after that.

Oscar meets his lover, John Adams, in secret. John is genuinely in love with Oscar, but the latter thinks he doesn’t have enough money to lead life the way he wants. Meanwhile, Marine decides that she loves Raikes (Thomas Cocquerel), despite what other people feel about him. She decides to elope and tells Peggy about her decision. As they converse, Raikes visits the van Rhijn household and leaves a letter for Peggy. Armstrong secretly reads the letter’s content and tries to get Peggy fired.

Oscar gets the chance to be near Gladys and the Russell family while in Newport but fails to make any significant improvement in his standing with them. However, John shows up there, complicating the matter. Toward the end of the episode, Bertha, along with Ward McAllister and Aurora, goes to see the new house that the Astor family has recently purchased in Newport. While they are there, Mrs. Astor arrives unexpectedly.

Polite society seems to have no intention to accept Bertha and the Russell family among themselves. While Mrs. Astor does believe that George is a force to be reckoned with, she outright rejects the idea of letting Bertha be part of her social circle. When Bertha, Ward McAllister, and Aurora learn about Mrs. Astor’s arrival, they have no idea what to do. With the help of Mrs. Astor’s butler, Bertha is smuggled out through the kitchen. As she comes out the back entrance, Bertha undoubtedly feels humiliated. This is bound to have some ramifications for everyone involved. Like her husband, Bertha doesn’t forgive and forget easily.

The Gilded Age Episode 8 Ending: Does George Get Arrested? Who Sent the Note to Dickson?

No, George doesn’t get arrested. The truth about the accident in Millbourne, Pennsylvania, comes out entirely by chance. Earlier in the episode, Marian sees Mabel Ainsley, George’s stenographer, delivering some papers to Larry meant for his father. When she visits a store, she spots Ainsley leaving and discovers that the other woman has left her purse behind. The store employee identifies her as Mrs. Dickson.

Marian volunteers to deliver the purse and subsequently visits the Russell home. George happens to be there at the time. Things suddenly become clear when he learns that Ainsley’s real name is Dickson. The man in charge of building the railroad is also named Dickson. In court, George’s lawyer makes Mrs. Dickson/Ainsley confess that George originally wrote the note for a different purpose. Bertha suggested a company to renovate his office, but George found them too expensive.

Ainsley kept the note, believing that it would be useful in the future. This isn’t the first time she and Dickson misappropriated money meant for other things. The court acquits George of all charges and tells Ainsley and Dickson that the matter will be referred to the prosecutor’s office. They both can potentially go to prison. Moreover, George threatens Ainsley that he will keep a tab on her and will ensure that she never works at any office ever again.

What Happened between Peggy and Her Father?

In this episode, Peggy is forced to revisit her tragic past after Armstrong reads the letter that Raikes left for her. She fell in love with Elias Finn, who used to work as a stock boy at her father’s pharmacy and was mentioned earlier in the series. They left Brooklyn and went to live in Philadelphia. Her father found her after she was married and pregnant and forced Elias to sign a paper declaring that he was previously married.

Her father then got a judge to declare Peggy’s marriage void. Peggy’s son died shortly after his birth. She was subsequently brought back to New York and told to forget the child. Peggy later tried to find the midwife who delivered her baby and was told that she had moved to Doylestown. She requested Raikes to see if he could find the woman. In the letter, Raikes told Peggy that he couldn’t find her either.