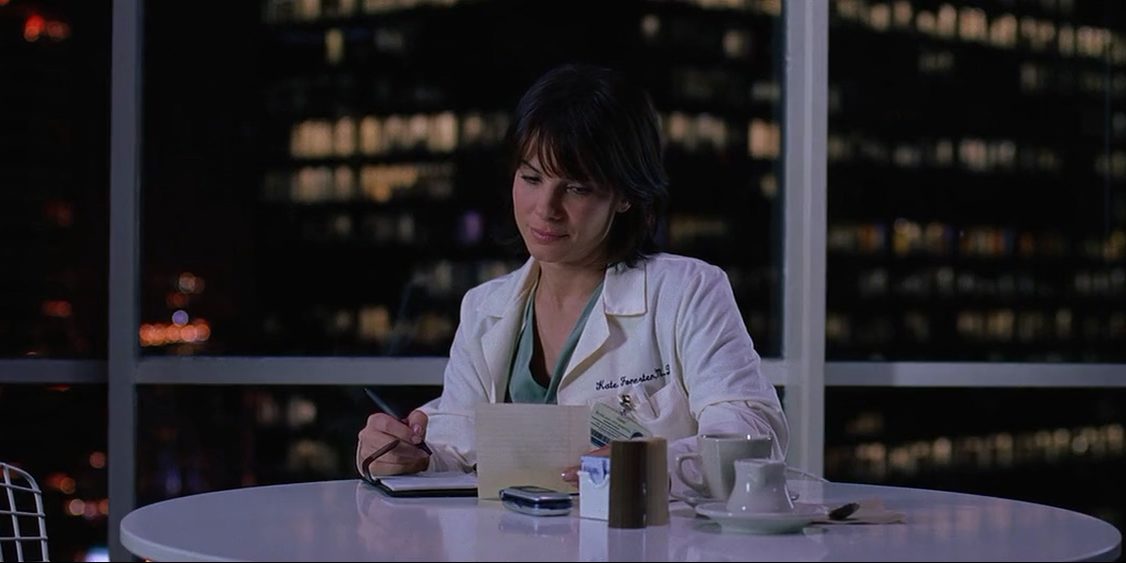 Alejandro Agresti directed the romantic fantasy movie ‘The Lake House.’ The story, an adaptation of the South Korean film ‘Siworae,’ follows lonesome medical practitioner Kate (Sandra Bullock). When her attempts at saving a hit-and-run victim on Valentine’s Day 2006 fails, Kate lets the viewers know how she has inherited the titular lake house that she does not inhabit.

However, as the lake house, and especially its adjacent mailbox, stay in a temporal flux, Kate establishes communication with the mysterious Alex (Keanu Reeves), who claims to live two years in the past. When the timelines mingle, the melancholic story spirals out of control. If you can not quite put your finger around the finale, let us be of assistance. SPOILERS AHEAD.

In the early sequence, Kate wakes up in the lake house when it’s autumn. During winter, Alex, the son of the house’s original owner, reaches there and reads Kate’s letter. Kate does not live in the house since she does not think that a cottage should be more than 6000 square feet in area. Thus, she seeks to change the address to her present residence in Chicago. While the letter is not meant for Alex, he reads it and writes an impeccable reply. Meanwhile, while lazing in a park on Valentine’s Day, Kate sees a hit-and-run incident.

Kate calls emergency services and attempts to save the guy, but he seemingly dies. On the other hand, Kate asks Alex to meet at her place, but the location takes Alex to a construction site. He plants a tree in front of it, which has grown quite a bit in Kate’s timeline. With the revelation that the mailbox acts as a time machine, Kate’s epistolary time warp romance with Alex reaches an equilibrium, and they long to meet each other.

In 2004, Alex runs a construction business after Simon, his father and a great architect. He has a girlfriend in Mona. On the other hand, Kate is in an on-off relationship with Morgan. While leaving for Madison on a train, Kate catches a glimpse of Alex, who runs by the train to give Kate back her copy of Jane Austen’s ‘Persuasion.’ Disheartened that she does not know her admirer yet, Kate fixes a date with Alex on July 10, 2006, at 9.05 pm. Although Alex does not call her at the moment, Kate meets Alex and Mona at her birthday party later. Alex and Kate cannot speak much, as they feel the burden of the future. While they try to hold on to the present, time flows between them.

The Lake House Ending: Is Alex Dead or Alive?

When Kate decides to renovate the loft apartment, she takes Morgan to Visionary Vanguard Associates, the company of Alex’s family. Alex’s brother Henry Wyler greets the duo, but Kate is curious about a photo hanging on the meeting room wall. The image showcases the renovation plan of the lake house that Alex devised early in the movie, which he showed to Kate to earn her approval. When Kate enquires about the photo artist, Henry divulges that Alex died on February 14, 2006. Kate herself also knows the truth — that Alex is a figment of her imagination.

As Kate tells Alex earlier in the story, he died in the accident, while she created a story around him to cope with the trauma. However, this reading would be natural if not for the final moments, where Alex seems to be quite alive as he hugs and kisses Kate. Thanks to the premonition of Alex’s death, Kate forbids him to cross the road at the park in a letter she writes for him. Voila, Alex does not cross the road, and he remains alive at the end. He meets Kate, and we get a happy ending. While a happy ending is what the creative heads aimed for the story, they did not tie all the loose ends.

If Kate does not speak to Alex before the February 2006 accident, how can she prevent Alex’s fatality? Therefore, in all probability, Alex has been dead since the beginning of the story. Seemingly, Alex and Kate meet sometime between 2004 and 2006, on the eve of Kate’s birthday. After catching Kate kissing Alex, Kate’s committal relationship with Morgan goes through some trouble. Then, Kate discovers that the person who dies on the streets on February 14, 2006, is the same person who kissed him at the party. After the discovery, Kate’s mind spirals, and she starts living in unfinished fantasies of the past.

Do Kate and Alex End Up Together?

No, Kate and Alex do not end up together, even if the final minutes suggest the contrary. While Kate desperately looks for a reply in the mailbox, she finds nothing, breaking into tears. Shortly after, Alex walks through the woods, and the lovers embrace for a picture-perfect ending. However, Alex can’t be alive at the time because he dies on the morning of Valentine’s Day, 2006. Therefore, one can say that they do not end up together. However, Alex leaves several objects and memories in Kate’s life. For instance, Kate finds her lost copy of Jane Austen’s ‘Persuasion’ on the wooden floor of the lake house.

Moreover, Kate gets Alex’s pet dog, Jack. Till the end, Jack stays with Alex. Thirdly, Kate unwittingly visits the real estate company Visionary Vanguard Associates, which Alex’s brother runs. Above all, some cosmic force ties them together as they kiss on the night of Kate’s birthday, even as Mona and Morgan, their respective partners, are with them. All the signs indicate that they are meant to be together, as both play crucial roles in each other’s life. Therefore, the encounter with Alex at the party helps create the story in Kate’s mind. This thought may bring you to the following question.

Is Kate Imaginging/Dreaming of Alex In The End?

Kate may be imagining Alex at the end. It is at least more feasible than the other, straightforward suggestion. Movies like ‘The Butterfly Effect‘ and ‘Eternal Sunshine of the Spotless Mind‘ tell us that there is nothing straightforward about time warp movies, and this one is no different. Kate may be dreaming in the final moments and even for most of the story. Towards the end of the story, Kate attempts to escape the illusion when she tells Alex how she thought him up. You may remember how after grabbing food with her mother at Daley Plaza, Kate experienced a nasty accident.

She was already quite lonesome, and she thought that was not how Valentine’s Day should have ended. Therefore, more than Alex’s physical presence, her belief in romance propels the story forward. The idea leads her to the mailbox, which becomes a point in her habitual fantasizing. Gradually, Kate lost herself in the fantasy where time stood still. However, as she stresses towards the end of the confession, Kate has learned to live the life she has got (and not think about what she is missing out on). Kate tries to forget Alex, but discovering the copy of ‘Persuasion’ brings back Alex’s memory, and her mind starts spiraling again. In that way, the movie pays homage to the timeless Jane Austen novel.

In Which Year Does The Movie End?

The movie possibly ends in 2008, as Henry lets Kate know that Alex died “two years ago today.” While oscillating between the past and future, the film reflects upon the timelessness of the present. Therefore, more than confusing the audience to figure out the nooks and crannies of the timeline, the film encourages us to remain in the present.

However, as the protagonists inhabit different timelines (which may as well indicate their respective states of mind — while Alex lives in the past of his memories, Kate lives in the future of her aspirations), the present seems challenging to grasp. In other words, Kate’s past is Alex’s future, as it is a timeless present for the audience. Curiously, in the end, it is Kate who seems to be living in the past, holding on to the memories of Alex.

Read More: Where Was The Lake House Filmed?