The Last Bus Ending, Explained: Who Is Lucy? 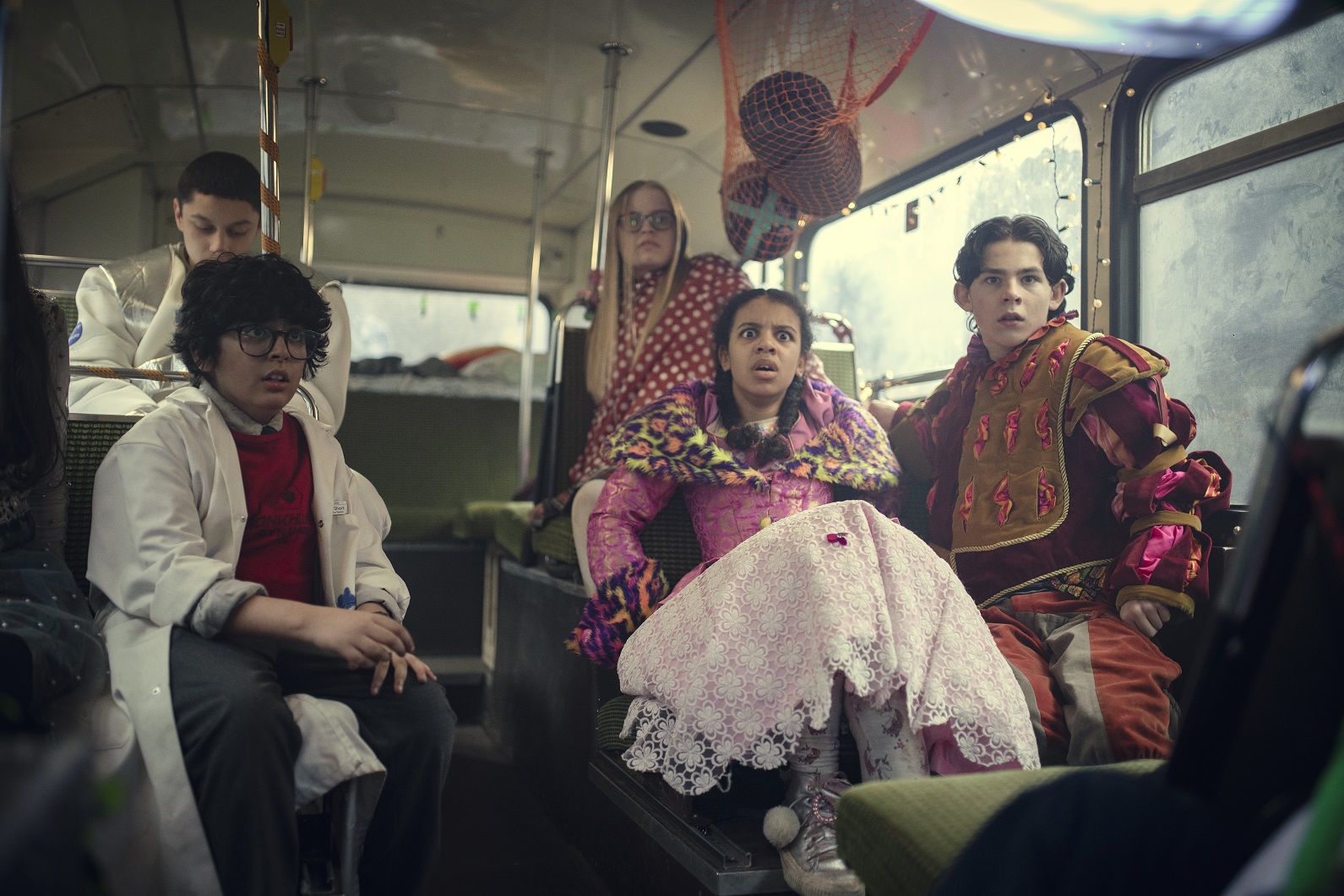 Netflix’s ‘The Last Bus’ is a science-fiction adventure comedy series that harks back to the old days of teen and young-adult entertainment. It doesn’t veer toward darkness and nihilism, which has become a staple of the genre since ‘Hunger Games.’ Instead, it is filled with optimism and heart and strives to tell a wholesome story. The show creators do all this while developing each character into a rounded individual. Robert Sheehan, of ‘The Umbrella Academy’ fame, brings his natural charisma to the Dalton Monkhouse, the eccentric and probably insane billionaire who seemingly vaporizes billions of people in a fanatic quest to save Earth. Here is everything you need to know about the ending of the first season of ‘The Last Bus.’ SPOILERS AHEAD.

The series begins at a Monkhouse Dynamics facility. One of the egg-shaped A.I. orbs, which are later revealed to be genie orbs, escapes from the facility after being dropped by an employee. Meanwhile, at Braelawn Academy, students prepare to attend a mysterious launching event at Monkhouse Dynamics. One of the students, Nas (Moosa Mostafa), has won an essay contest on Monkhouse and has the opportunity to be present at the event with several of his fellow students. Mr. Short is a science teacher at Braelawn. He is in charge of chaperoning the students.

When the bus that is supposed to take the students to the Monkhouse Dynamics finally arrives, it is revealed to be not only a double-decker but a poorly maintained one. Some of the other students are Sophie (Phoebe De Silva), Nas’ older sister; Misha (Lauryn Ajufo), Sophie’s best friend; Tom (Daniel Frogson), the son of a soldier and part of a group of bullies; Danny (Curtis Kantsa), Tom’s friend and the leader of the bullies; Josh (Nathanael Saleh), a boy younger than Tom and Sophie; Bethan (Carys John), Josh’s best friend; and Chelsea (Marlie Morrelle), a stickler for the rule type.

Nas is a science prodigy and virtually worships Monkhouse, who is a scientist and inventor himself, especially in the field of artificial intelligence. At Monkhouse Dynamics, Nas gets separated from the rest of the group and ends up in the facility mentioned above. He encounters the escaped orb from before. Meanwhile, appearing as a hologram in multiple cities, Monkhouse delivers a bone-chilling speech, accusing humanity of causing the destruction of Earth’s environment. He then unleashes his squad of genie orbs, which begin targeting everyone in the audience with an energy beam, making them vanish instantaneously. Before Mr. Short disappears, he tells Tom to save as many as he can.

The survivors start to think that whoever gets zapped with the energy beam is vaporized. They conclude that Danny has suffered the same fate after finding the electrical vehicle he was using on the side of the road. They reach their homes, only to find that their parents have gone to their school for evacuation. When they reach Braelawn, they discover that it was a ploy by Monkhouse to get their parents to gather at one place so that he could use the genie orbs on them as well.

The group eventually decides to go to Wallgate, a military barrack from where Tom’s father seemingly leaves him a voicemail, believing that other adults would be there as well. On their way, they befriend a genie orb and name it Borb and earns the enmity of another genie orb and name it Stevil. When they arrive at Wallgate, they discover that Tom lied to them. Like Mr. Short has told him, he wanted to protect others and get them to safety. Ultimately, his friends forgive him. They discover that Monkhouse has begun the massive process of reforesting the planet with the genie orbs.

In episode 9, the group ends up in what turns out to be Monkhouse’s mansion. In the season 1 finale, they find Monkhouse inside a stasis pod and learn the truth about his megalomaniac plans. Danny returns, and a mysterious girl named Lucy makes her first appearance.

The Last Bus Ending: Where Is Everyone Else? Have They Been Vaporized / Killed?

Those who got zapped by the energy beam are not dead. In the season 1 finale, Monkhouse reveals to Tom, Nas, and the others that the orbs teleported people, including their parents, to sleep facilities across the world, where they are placed in stasis pods. They will remain asleep until the global carbon levels are at an optimal average, which can take at least 100 years. Each of these facilities houses a hundred million people. Evidently, the entire operation, which Monkhouse calls the Harvest, was an overwhelming success.

Monkhouse may not be a genocidal murderer but he is definitely holding billions of people against their will. He takes Borb from the protagonists, reactivates it, and tries to turn it against Nas and the others. Much to his surprise, it doesn’t work, and he gets captured.

Just after the protagonists capture Monkhouse, a figure in a black hood walks into the house. Watching them enter on the security cameras, Sophie, Tom, and Misha go to confront him. The figure takes their hood off, and it is revealed to be Danny, who is now working with a girl named Lucy (Lara McDonnell). She turns out to be Monkhouse’s estranged daughter. After realizing what her father has done, she has come to claim her inheritance. Lucy is even more diabolical than her father. She plans to use his Nexus Key, the instrument with which Monkhouse controls everything in Monkhouse Dynamics, and use it to pick who wakes up from the stasis and who doesn’t.

Eventually, Dalton escapes from the house on his stasis pod after activating the molecular implosion sequence. Everyone else also gets out, including Danny and Lucy. The former rejoins the group, and Borb makes the bus fly. The group now has the Nexus Key, but it is coded to Monkhouse’s genetics, so no one can operate it besides Monkhouse and Lucy. The eight friends decide that they will find their parents and save the world. In the ending scene, it is revealed that Monkhouse has ended up on some beach. It’s highly possible that one of his facilities is in the vicinity.