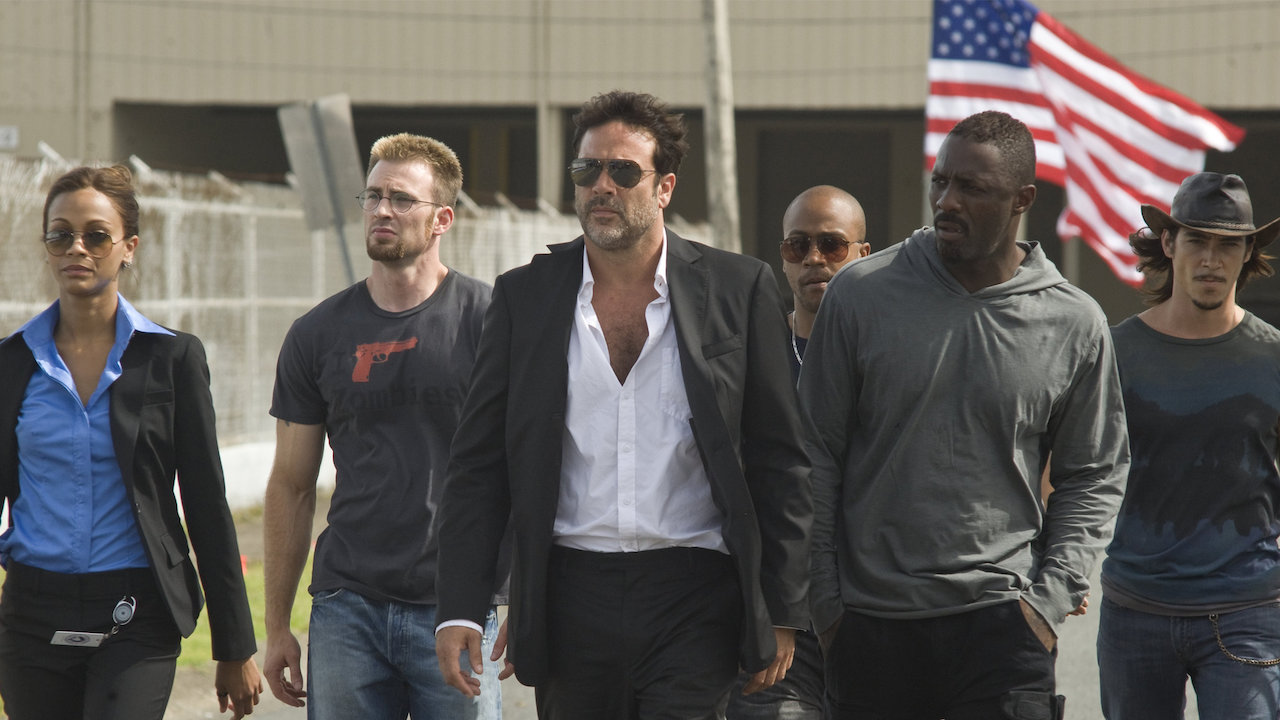 Helmed by Sylvain White from the titular DC/Vertigo comic book series by Andy Diggle and Jock, ‘The Losers’ is a 2010 all-starer action thriller blockbuster with international intrigue. The CIA operative thriller probes into the titular team as they make their way across a massive cover-up. Working under the orders of elite villain Max, they execute a drug-lord in the Bolivian jungle, and in the process, get their names tainted. The rest of the movie follows the team as they team up with Aisha to clear their names and get revenge on Max.

Performed by Jeffrey Dean Morgan, Zoe Saldana, and Idris Elba — with Chris Evans in an improbable role — and packed with memorable dialogues and a whole lot of fun, this is a highly potent action extravaganza. As the movie comes to an open-ended finale, some questions require further probing. If you find yourself scratching your forehead in search of answers, let us break down the narrative for you. SPOILERS AHEAD.

The early scenes introduce us to the titular losers, a US Special Forces black op team comprising leader Clay, techie Jensen, sniper Cougar, transport manager Pooch, and tactical specialist Roque. The five men carry out a mission in the jungle of Bolivia under the order of Max. The mission entails taking out Bolivian gangster Fadhil, following which a locked-and-loaded airplane would bomb the hideout. Clay detects children in the perimeter and requests to abort the mission, but Max apparently loves a good explosion.

Clay and his men defy the orders of their superiors and work under their best judgments to rescue the kids to a safe place. After dealing with Fadhil, Clay and his men leave the transport for the kids, but the airplane bombs the copter as well. Only, the bomb was actually meant for Clay and the team. They are effectually disgraced and declared dead in their home country and spend their days in Bolivia betting on cockfights. Clay and Roque begin to fall out, but along comes a mysterious woman named Aisha with a business proposition.

She knows the whereabouts of Max and wants the boys to get their revenge, but here’s the catch – it’s a literal suicide mission. Max is surrounded at all times by his elite guards, his loyal warmongering Yankee sidekick Wade, and on top of that, Max does not even blink an eyelid before putting a bullet in people. To Roque, the mission seems to be more risk and less gain, but when they know that Max is buying a devastating next-generation weapon that can wipe out a landmass in seconds, the team embarks on the mission.

The Losers Ending: Do the Losers Lose?

In a movie called ‘The Losers,’ the only natural thing for the audiences is to expect Clay and his men to lose. And they almost do. After the mishap in Bolivia, Clay throws their name tags into the helicopter debris to dupe the military into thinking they are dead. For the next four months, Clay and his team stay dormant in Bolivia, but Aisha finds him out in the meantime. Upon Aisha’s insistence, Clay and his men jack a copter and move from Bolivia to the US to search for Max. Max is a mastermind supervillain apparently loaded with weapons and henchmen, and they decide to airlift his van when he is mobile.

However, it turns out that Max isn’t inside the van – there is instead a paramilitary group guarding a courier drive. After this disappointment, Roque turns against Clay, but they seemingly make amends. In the meantime, Jensen probes into the matter to find that the drive is a coded stash with 400 million dollars in it. He also deduces Max’s base of operations, which is at the port of LA. Going to the location, they realize that the whole setup is a trap laid for them by Max. To worsen things, Roque changes sides since he already cut a deal with Wade.

Clay and his team are in a precarious situation, as they root for their lives at gunpoint. But in the meantime appears the seemingly femme fatale Aisha, who is actually savior Aisha. In a subversion of the original trope, the film sees Aisha taking the helm of the situation. She comes hurling a missile launcher, and the bad guys drop dead in an instant, including Wade and Roque. Therefore, even if the losers come to the brink of losing, they have a winner in Aisha, ultimately defeating Max.

Is Max Dead or Alive?

Max is a criminal mastermind and a lover of next-generation weapons. In the early scenes of the movie, the elite team works under the orders of Max to eliminate drug-lord Fadhil, but when they see that Max is in the process of killing a bunch of kids, the team defies orders and acts to save the kids from the airstrike. They manage to save the kids, but as the military aircraft launches another missile targeting the helicopter, the kids die as well. Later in the story, Jensen finds out that Aisha is the daughter of Fadhil.

Following Aisha’s confession, we realize that Max orchestrated the attack in Bolivia as a cover-up for his operations since Fadhil got to know about his diabolical plan. Max goes to Dubai to get his hands on an eco-friendly weapon called the Sonic Dematerializer, which acts as a nuclear warhead but with no fallout. You apply it on a landmass, and it just evaporates into a whirlpool. The deal in Dubai goes awry with Wade pushing an acclaimed scientist off the rooftop, but another scientist named Vikram complies with Max, and they move from Dubai to Mumbai to LA to finalize the deal.

Max wants to orchestrate a large-scale terrorist attack, which would reinstate world order, in Max’s opinion. Max and his goons corner Clay and the team in the final battle, but Aisha appears to turn the situation in the losers’ favor. In the end, Clay manages to corner Max at a port dock, and while Max thinks that Clay cannot shoot him, Clay cannot be happier to disagree with Max. He shoots Max in his leg, but Max throws the detonator of the next-gen weapon into the water, and Clay jumps to retrieve it.

After grabbing the detonator, Clay swims ashore, where they neutralize the detonator with the help of duct tape. In Pooch’s opinion, there are not many issues that a generous application of duct tape cannot solve. But where does Max go? It seems that he disappears after the episode while promising to come back. He is not dead, which posits a major threat for the world in the cinematic narrative. Does it make us root for a sequel? It sure does.

Do Aisha and Clay Get Together?

In the epilogue, a final mission awaits the losers. The wife of Pooch is in the process of delivering at a hospital, and Pooch descends into the hospital premises with the help of his team. Back from the dead, Pooch goes to meet his wife, and they have a hearty laugh. Later still, Jensen goes to support his niece’s football match. His team accompanies him. But when a player of the opponent team wrongly tackles Jensen’s niece, he unleashes fury in the field. The episode is quite hilarious.

But what happens to Clay, one might ask. He seemingly has no family other than his team, but Clay and Aisha form an ostensibly strong bond in the process of the mission. Do they end up together, then? Although the movie does not give us a plausible answer to this question, Aisha reminds Clay that they still need to take care of Max at the end of the movie. Afterward, Aisha reminds Clay of another unfinished business – the promised dance that they never had. Aisha proposes to dance with Clay when the mission is over, and we sense that it is quite plausible for them to get together in the future.