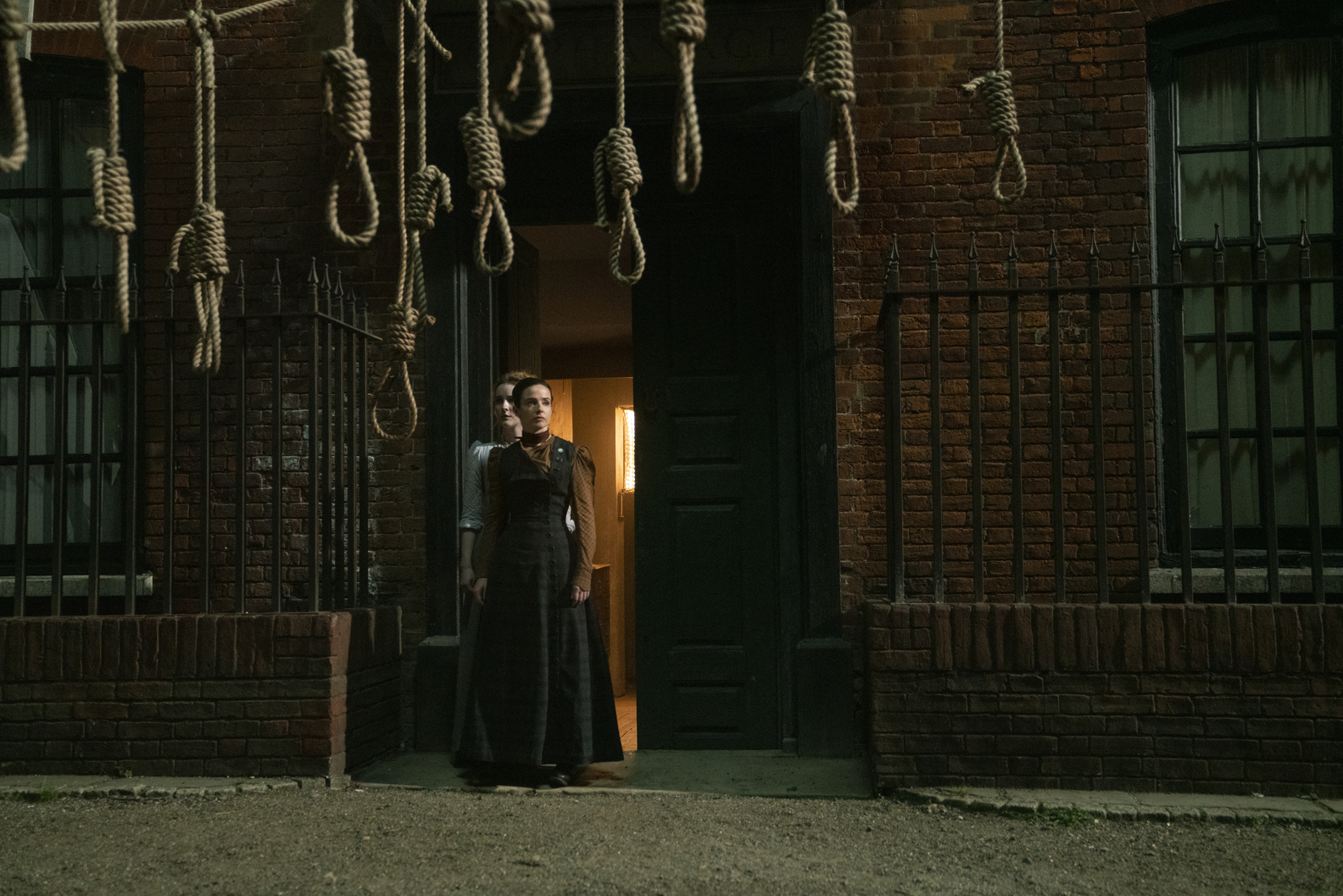 In HBO’s steampunk fantasy series ‘The Nevers,’ the people who gain abilities or “turns” predominantly belong to various disenfranchised groups in Victorian London. Their sudden empowerment makes the government and the society at large afraid of them. This inevitably leads to violence and death. Beyond its superhero and allegory to real-world credentials, ‘The Nevers’ aspires to be a mystery drama as well. Each episode ends with several new mysteries after solving a few old ones.

In episode 5, titled ‘Hanged,’ the conflict between the custodians of St. Romaulda’s Orphanage, Amalia True (Laura Donnelly) and Penance (Ann Skelly), reaches its peak, forcing the others at the orphanage to pick a side. Maladie (Amy Manson) is sentenced to public execution, much to the horror of many as public executions were banned in the country a few decades back. Penance comes up with a plan to rescue her, while Amalia goes to search for the source of their powers. Massen (Pip Torrens) and his friends end up getting exactly what they wanted — a violent spectacle. Here is everything you need to know about ‘The Nevers’ episode 5 ending. SPOILERS AHEAD.

The episode opens with Amalia and Dr. Cousens (Zackary Momoh) in bed together; apparently, they have resumed their affair. Before letting Nimble (Vinnie Heaven) join their group, Amalia has instructed that he must spend some time with Desirée (Ella Smith) to clarify what his and Orrun’s (Nick Frost) intentions are. The verdict in Maladie’s case even makes some of Massen’s friends uncomfortable. It is revealed that Amalia was right when she deduced Massen orchestrated the attacks on her and Mary.

This episode peels off the calm and ruthless demeanor of Lavinia (Olivia Williams) and shows her vulnerable side. She demands that Hague (Denis O’Hare) kill the entity inside the ship that gave the Touched their powers. Later, during her conversation with Augie (Tom Riley), it is revealed that she hasn’t always used a wheelchair. The government implements two laws to distinguish the Touched from the rest of the society: one forces them to register themselves at their local police station, while the other requires them to wear a blue badge. Obviously, this is a reference to Nazi Germany and its treatment of the Jewish community.

Since learning that Mary’s song was actually a message from the entity (which now has a name, “Galanthi”), Amalia has decided that she must find it. From the message, they know that it’s currently underground, and some people might already have access to it. Penance tells her that the best point of entry is under the Royal Military Army base. The former builds the drill that they need. They also decide to use Maladie’s execution as a diversion as the military will be out in the city that day.

Massen reaches out to Orrun and hires him to cause just enough chaos in the city on the execution day to remind its citizens why they need order. As the fateful day approaches, Penance starts to believe that she is meant to save Maladie, and this predictably causes a dispute between her and Amalia. But she recognizes that Amalia’s mission is equally important when they see rows of nooses strung up just outside the orphanage. Ultimately, some of the Touched, including, Nimble, Harriet (Kiran Sonia Sawar), Desirée, George, and Violet, go with Penance, while Auggie, Annie (Rochelle Neil), and Cousens accompany Amalia.

No, Maladie doesn’t die. Mundi, who also has problems with Maladie’s public execution, ensures that there will be people in the public square, per the court’s order, but it will not be crowded. Still, dozens of people, including Hugo (James Norton) and Massen, are in attendance. After Maladie is brought out, there is suddenly an earthquake. This is likely related to what Amalia and her group are doing. As things start to unfold, it becomes apparent that Maladie herself has a plan. The Colonel (Mark Benton) is there and forces a couple of guards with his turn to dig a hole inside a tent. Penance triggers her plan, but it quickly fails, and Maladie seemingly hangs herself.

Chaos follows as the Colonel electrocutes everyone touching the iron railings in front of the gallows, killing several of them. Mundi realizes that Maladie wanted to be hanged. However, while he checks Maladie’s hanging body, one of her shoes falls to the ground, and Mundi finds that several of her toes are missing. As he later deduces, the woman who killed herself is not Maladie but Clara, one of Maladie’s fanatic supporters, along with the Colonel. She cut off her toes as sacrifices to God to gain a turn. And death is the ultimate sacrifice.

Who Is Effie Boyle?

We are introduced to Effie Boyle as a highly competent journalist for The Sentinel earlier in the series. She is often found at the police station, engaging Mundi and other officers with important and logical questions. Episode 5 shows her saving Harriet from being trampled by a panicked crowd. However, as it is revealed at the end of the episode, this is the real Maladie. She used the disguise to infiltrate the police station and orchestrate her plan from within, knowing that everyone will be so focused on her gender that they will not look up her credentials. The real Effie Boyle was the woman whose body was discovered in the mines in the first episode.

If Massen wants organized chaos in the city, Maladie seeks to unleash the unrestrained variation. By the end of the episode, it’s Maladie, among all the main characters, including Penance and Amalia (she doesn’t find Galanthi), who gets what she wants. What Orrun and his men are doing is going to make the situation even more uncontrollable. The public will likely be in a frenzy and demand more deaths of the Touched.

Furthermore, George accidentally activates the lever holding in one of Penance’s inventions. It was meant to be used during Maladie’s rescue, but realizing that the situation has turned, Nimble told George not to pull the lever. It might have disastrous consequences for the orphanage, which will likely have to endure an antagonistic population from now on.