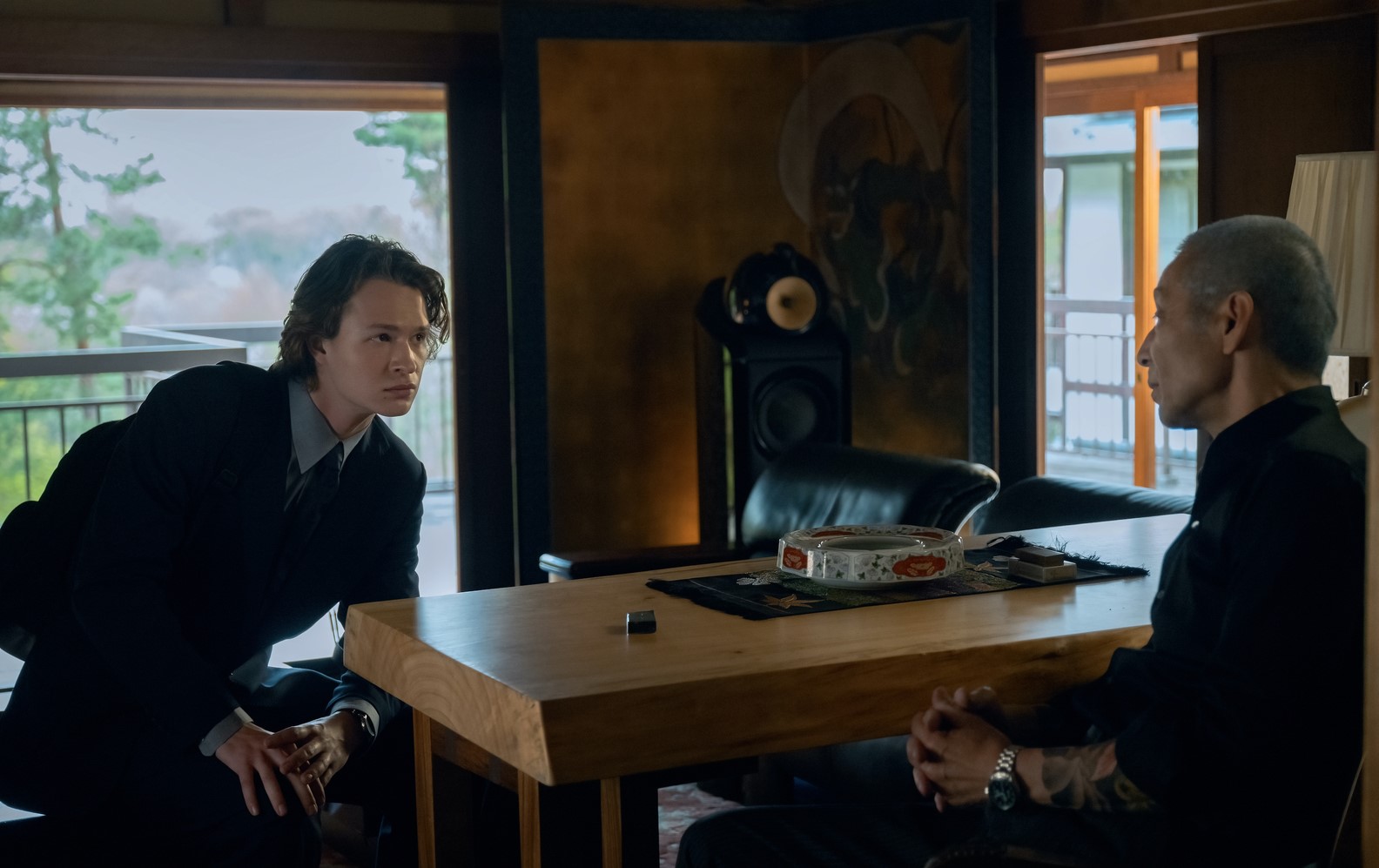 There are four main characters in ‘Tokyo Vice’: Jake Adelstein (Ansel Elgort), Hiroto Katagiri (Ken Watanabe), Samantha Porter (Rachel Keller), and Sato (Show Kasamatsu). They represent the four aspects of the Kabukichō district: journalists, police, the yakuza, and the nightlife. In episode 6, titled ‘The Information Business,’ Chihara-Kai discovers that Tozawa is bringing in a shipment of meth and lets Jake know about it. In turn, Jake reaches out to his police contacts.

Samantha tells Sato about Matsuo, prompting the yakuza member to take action. In episode 7, titled ‘Sometimes They Disappear,’ Samantha becomes worried as Polina goes missing. Jake helps Eimi (Rinko Kikuchi) with an article on a series of homicides where the female victims were killed by their partners. Meanwhile, Katagiri sets a trap for a corrupt member of the force. Here is everything you need to know about the ending of ‘Tokyo Vice’ episode 7. SPOILERS AHEAD.

In episode 6, After the failed attack on Ishida, Chairman Nakahara, the head of the western faction of the yakuza, comes to Tokyo for a peace meeting with the high-ranking members of Chihara-Kai. He forces Tozawa to kneel and apologize to Ishida, on top of paying the de-facto leader of Chihara-Kai a significant amount of money. After Ishida and the others are gone, it is revealed that Nakahara sent Tozawa to Tokyo to conquer the east for them and was aware of the plans to assassinate Ishida. Before leaving, he warns Tozawa against failing again.

Jake gets a tip from Ishida about Tozawa’s meth shipment. When he goes to Katagiri with it, the latter tells him they will wait, much to Jake’s dismay. After speaking to Eimi, who reminds him that he doesn’t work for Katagiri, Jake speaks to Maruyama and seems to convince him to conduct a raid. However, nothing is apparently found, and Jake ruins his meticulously built relationships with the Japanese police in the process.

In episode 7, Eimi tells Jake to look into a case where a woman was killed by her partner. She believes that it is part of a pattern where homicides occurred because the police ignored the women’s calls for help against their violent partners. Despite the hard work Eimi and her team put in and the importance of the story, the article is ultimately published on one of the inside pages and fails to garner any attention. Besides helping Eimi with her article, Jake tries to turn Misaki, who is Tozawa’s mistress, into his source. Meanwhile, Tozawa collapses during an event, inadvertently letting people know something is wrong with him.

Toward the end of episode 6, it is revealed that Miyamoto has been supplying information to Tozawa. What Ishida told Jake was true. There was indeed meth in that plane. But Miyamoto, who led the search, ensured that they wouldn’t find the drugs. So, while that drug route is forever close to Tozawa, the gang members remain out of police custody. After the body of the engineer that retrieved the drugs for the Tozawa washes up, Katagiri decides to set up a trap.

He lets other departments know that Organized Crime is close to arresting Tozawa, which predictably prompts Miyamoto to come snooping. Katagiri tells him that they had been building a case against Tozawa for months, and the engineer was their informant. He also lets the other police officer know that they are keeping all evidence against the yakuza leader in a basement room.

Miyamoto subsequently goes to speak to Tozawa, who tells him to find out what kind of evidence Katagiri has. He also promises that this will be the last thing that Miyamoto does for him. However, when Miyamoto breaks into the room, he only finds empty boxes. There is a camera on the wall. On the other side, Katagiri watches him. Miyamoto realizes that he has been caught red-handed.

The sixth episode begins as Samantha receives a voicemail from a worried Polina, asking her why she hasn’t been answering her calls. She later meets up with Matsuo and learns that her father has hired him. Instead of going back home and facing her father, Samantha agrees to do ten sessions with Matsuo. However, she tells Sato about this, who initially tries to threaten Matsuo but learns that the other man has a connection with high-ranking members of Chihara-Kai. He then goes down on his knees and begs Matsuo to leave Samantha alone. When Matsuo responds with obscenity, Sato beats him to death.

Polina is an East European expatriate. At the start of episode 7, she is picked up by a black car and is not heard from since. The situation takes a 180-degree turn, and it is now Samantha who is worried about Polina. She asks Sato for his help to find out what happened to her friend. Sato threatens Polina’s boyfriend, who reveals that she had incurred a large debt at a local club. Sato speaks to the owner and learns that Polina has been sent to Yoshino, likely to pay off her debt through sex work. After things seemingly end between Sato and Samantha, the latter comes to Jake for his help in finding Polina.