Was Emily Dickinson Abused by Her Father? What was Her Relationship with Her Father Like? 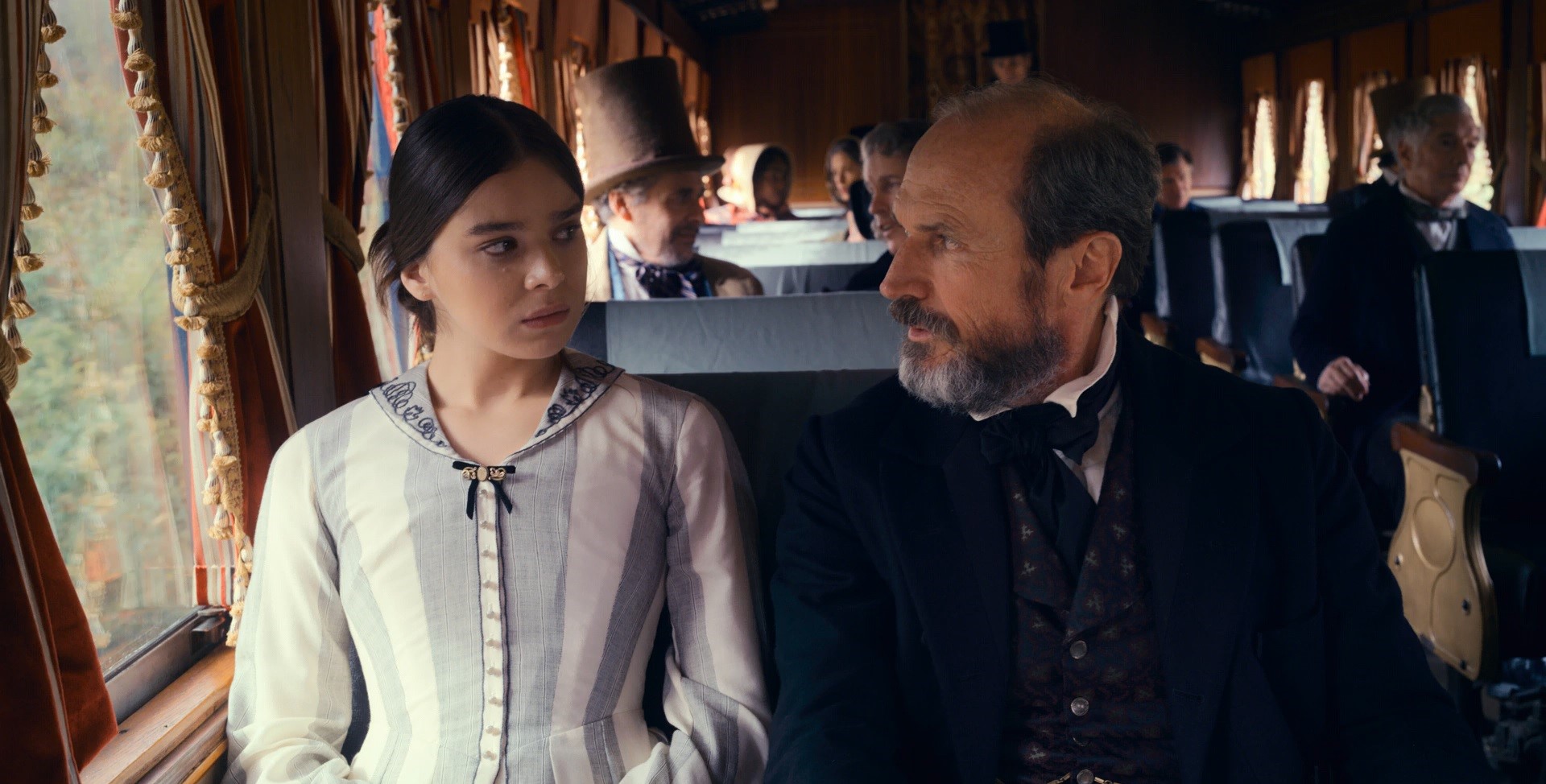 ‘Dickinson,’ the Apple TV+ comedy-drama created by Alena Smith, dives deep into the familial life, personal interactions, and artistic processes of Emily Dickinson (Hailee Steinfeld), a brilliant poet from the 19th Century who was not well-known during her time. Against the backdrop of the orthodox society of Amherst, the show explores how Emily balances her overwhelming passion for poetry alongside her treasured personal relationships.

Emily’s father, Edward Dickinson (Toby Huss), emerges as an influential force in her life. In season 1, in particular, Emily tries to hide her poetry from her father, who is openly against her artistic tendencies. Soon, however, their relationship matures and improves. So, was the real Emily mistreated by Edward? Or did the two of them share a good relationship? Let’s find out. SPOILERS AHEAD.

Was Emily Dickinson Abused by Her Father?

In season 1 of the show, we see that Emily tends to avoid everything that traditional women of her time are expected to do — including getting married. However, even as her mother frets over her spinsterdom, her father, Edward, says, “Emily doesn’t have to marry anyone as far as I’m concerned.” So, what was the real Edward like?

Born in 1803, Edward Dickinson was a Yale University alumnus who established his legal practice in Amherst in 1826. He was a respected member of the small town and worked hard to uphold his duties as a lawyer, politician, and citizen. Emily, born in 1830, found her father to be quite stern and meekly obeyed him as a child. A member of the conservative Whig political party, the Dickinson patriarch led the kind of disciplined life that was expected from an esteemed man — from the upper echelons of society — of his time.

The show too addresses how Emily’s domestic life is controlled by her father. When Edward finds out that his daughter got her poem published in the local college newspaper, he loses his temper. “Have I or have I not made myself quite clear that I do not approve of a woman seeking to build herself a literary reputation, Emily?” he yells at her, banging the table and making her cower. He goes on to say that they have given her “too much freedom” and that she has taken advantage of their kindness. Thus, we get the impression that Edward is strict and does not respect his daughter’s identity as a poet.

Soon, however, we get to see Edward’s kinder side. “Just promise me you won’t get married and move away,” Edward tells Emily, coming to her room to apologize to her for his previous outburst without actually saying the words; he then falls asleep in her bed. Later, Emily even manages to convince her father to get a maid, Maggie, so that she can avoid household chores and focus on her poetry.

For the most part, scholars agree that Emily “obeyed” her father as a child, began to rebel against him as a youngster, and eventually ended up sharing a sense of mutual respect with him. After all, men of the 19th Century were expected to be tough, unyielding, and discriminatory towards women. However, there is a small group of scholars who believe that Emily’s feelings for Edward go beyond the range of a daughter simply being intimidated by her old-fashioned, career-conscious, and status quo-upholding father.

In the controversial book ‘The Rape And Recovery Of Emily Dickinson,’ poet and author Marne Carmean claims that Emily may have been sexually abused by her father and that her trauma manifests itself in her poetry. Carmean alleges that Emily’s reclusive demeanor was a result of her father’s sexual opportunism and uses The Incest Survivors’ Aftereffects Checklist to support her arguments.

As there isn’t a lot of non-circumstantial evidence to back Carmean’s allegations, we may never know the truth about Emily and Edward. Often, literary critics warn against reading all works of an artist as being autobiographical. However, others point out that artists — especially women — from eras long gone by coded their terrible realities and rebellious views into their works, so as to speak the truth but also avoid its potentially disastrous consequences. Until there’s concrete evidence regarding Carmean’s claims, it is impossible to confidently state that Edward abused his daughter.

In ‘Dickinson,’ actual historical facts pertaining to Emily and Edward are woven into the dialogues and scenes. In season 1, to Benjamin Newton, Emily says, “My father buys me books and then begs me not to read them. He fears they joggle the mind.” This is true — Emily said just as much in her letter to Thomas Wentworth Higginson in 1862. Edward would buy his daughter books on social etiquette and decorum, such as ‘Letters on Practical Subjects to a Daughter’ by William B. Sprague and ‘A Father’s Legacy to His Daughter’ by John Gregory.

We know that Edward gifted Emily a Newfoundland dog in 1849 — the dog quickly became her close companion. We see this dog, named Carlo, in the final scenes of the show as well. It is assumed that Edward gave Emily a dog so that she could enjoy his company during her long walks in the woods of Amherst. Thus, he definitely cared about his daughter’s well-being.

At the beginning of the show, Emily ends up telling her father that she’s a poet and that there’s nothing he can do to stop her from writing poetry. To this, her father smiles and says, “Yes, Emily. I know.” Thus, we see Edward warming up to Emily’s passion for poetry. In season 2, after Emily’s poem gets published in the newspaper, her father says, “You know what? It’s not too bad. She might make this family proud after all.”

However, Edward’s misogynistic side — after all, he’s a product of his time — surfaces again in season 3 when he makes Emily the executor of his will but leaves all of his possessions to Austin. “Who else would it go to? You women?” he says, amused. “Women can’t own property. No, Em, it has something to do with how emotional they are. They simply can’t be trusted to make their own decisions.” Additionally, he points out that his decision is in line with the property laws of Massachusetts.

Seething — and realizing that her brother was right to distance himself from their father — Emily retorts, “You have no imagination. And for that reason, no one will ever know or care who you were.” Emily is especially hurt because her relationship with her father had recently matured and become joyous; she feels as though she made a terrible mistake by believing in him and choosing his side over her brother’s.

However, later, Edward starts accepting that times are changing and attempts to embrace radical new ideas. He begins by agreeing to join Austin in his legal quest to clear the names of a few Black men who got arrested whilst trying to save their sister, Angeline Palmer, from being sold into slavery. It’s made obvious that, despite his orthodox views, Edward genuinely cares about his children.

The real Edward served thirty-seven years as a treasurer of Amherst College, was elected to the United States House of Representatives for one term, and facilitated the construction of the local railroad. Having seen his own father grapple with financial difficulties, Edward decided to be close-fisted with his money. The Dickinson patriarch often had to take Emily for medical checkups, particularly when she was in school and developed issues with consumption. From the poet’s letters, it is largely assumed that her father was loving but rigid. He tended to get extremely worried about his children’s health; during his long work trips during their childhood, he would frequently write to them, emphasizing that they take care of themselves.

It seems as though Emily both feared and admired her father. In her letters, she called him “the oldest and the oddest sort of foreigner”. She pointed out that he would, on Sundays, read “lonely & rigorous books” and thought of him as a solitary man. Once, Edward told his daughter that “his life has been passed in a wilderness or on an island.” Emily also thought that her father was too engrossed in his career; in her letter to Higginson, she said that Edward “is too busy with his Briefs.” Emily rarely mentioned her father directly in her poems but often talked about him in her letters.

Emily spent most of her life in the Dickinson Homestead (her father’s house); she died there, in 1886, as well. Edward passed away many years before his daughter, in 1874. He died in a Boston boardinghouse, away from his family, soon after he collapsed during his speech at the state legislature. During the afternoon of his funeral, the entire town of Amherst shut down. Although we don’t know the details of their relationship, the show, using bits and pieces of historical facts, gives us heartwarming versions of Emily and Edward that go from being at loggerheads with each other to being mutually respectful.