Imagine what it would have been like to have thousands of young soldiers marching towards their death, unaware of what’s going to hit them. Now, imagine that you were the only one who could save them. The only one who could inform them of their fate, but of course, time is ticking away. One wrong move could destroy everything. This was the terrifying reality of the First World War that is on the brink of being forgotten. The war that changed the meaning of what war meant, and marked the beginning of modern warfare. This terrifying reality is precisely what Academy Award winning director, Sam Mendes (‘American Beauty’) achieves with his latest, and perhaps one of the most unconventional war films till date, ‘1917‘.

Time is the real enemy in this terrifyingly immersive film that has a fairly simple plot. It centres around two young British soldiers, Schofield, played by George MacKay, and Blake, played by Dean-Charles Chapman, that are sent to carry a life-saving message to an ally troop confirming that an enemy trap lays ahead and that they need to retreat. But the journey proves to be a high-risk odyssey for the two soldiers who are at a race against time, and at immense danger from the enemy troops.

But this the film achieves through it complex storytelling as everything happens in real-time. What makes ‘1917‘ a major contender for this year’s Oscars is the fact that the movie is a technical masterpiece, shot to appear as one continuous take to provide the real-time experience and anxiety that the two soldiers face in the 2 hours of its time. It allows the audience to walk in the footsteps of the two as they experience relentless danger. The film makes use of endless exteriors where none of the landscapes are ever repeated, as the soldiers are constantly on the move, turning the film into a threeway tango between time, space and the camera. 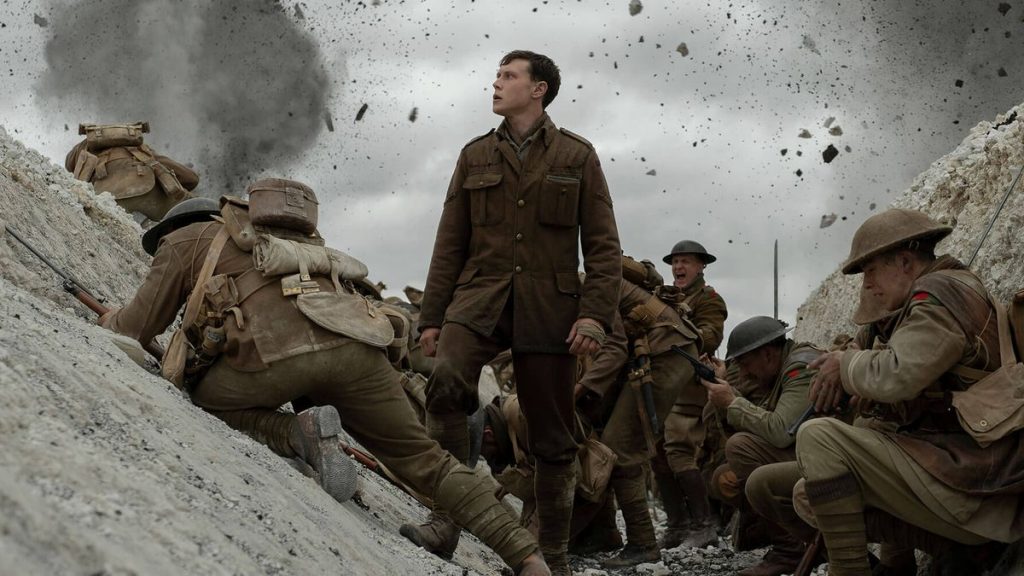 When the team first decided that they were going to film ‘1917’ as a continuous shot, they were told by everyone, including the studio, that it was impossible. But they proved everyone wrong and created something so staggeringly masterful and ambitious. It was all possible due to the collaboration between Mendes, cinematographer, Roger Deakins, and production designer, Dennis Gassner. All three of them have previously worked together on ‘Skyfall’.

Before the three started working on sets they had to carefully map out how each movement of the camera and of the characters will be achieved, as the camera follows the two soldiers everywhere in a seamless, continuous, single shot kind of way, and what the audience sees is all from their perspective. Almost like playing video-game of the war genre. In an interview, Gassner spoke of the filming and compared it to a choreography in an interview with The Wrap:

“The film is basically a piece of choreography … It’s an amazing brutalist dance, but also takes on a very dreamscape quality. But the practical side of it was inch by inch. We measured everything. Once we knew our journey, then we could start to plug in the architecture.”

So they plugged in the architecture, and filmed almost completely on location. ‘1917’ was shot with a dream-like quality but with real-life stakes. The film is series of endless exterior shots that portray a long and urgent journey through death-strewn landscapes. Most of which were created from scratch. The principal photography began in April 2019, and primarily made use of spaces in England and Scotland.

One of the most important and difficult locations where ‘1917’ was filmed is Salisbury Plain, Wiltshire. It also where the filming of the movie began in April 2019. Salisbury Plain is one of the biggest military training areas in the U.K. and has long history of training military troops from as long back as the 19th century.

Salisbury Plain is sparsely populated and remains as of the biggest areas of calcareous grassland in northwest Europe. It was an ideal location for a film like ‘1917’ that set in and based on the First World War, but the team had to fight to use the location because of the place’s rich history. There were concerns surrounding the filming on Salisbury Plain by several conservationists who believed that the production and set design would disturb the undiscovered archaeological remains in the area. A survey was also conducted before any of the sets were constructed on the land.

For particularly the Salisbury shoot, the crew advertised for local men of ages 16 to 35 to audition as extras. It was revealed that 500 out of the 800 extras chosen were used for scenes filmed in Salisbury itself.

The shoot on Salisbury Plain was also one of the biggest challenges for production designer, Gassner, as almost all the trench scenes in ‘1917’ were filmed there and the trenches had to be built from scratch.Along with the trenches, Salisbury was also used to create the French farmhouse in the film. The bombed and burning French village in ‘1917’ plays one of the most crucial role in relentlessly dangerous journey of our two characters.

The team had to dig out over 5,200 feet of trenches for the shoot, and in such a way that it allowed for the movement of all characters, along with 360 degree movement of the camera. Importance was given to create an environment that portrayed both the physical and emotional journey of the characters. This was done by carefully mapping each and every move of both the characters and the camera.

“We had to work out the length of the trenches and how we would enter and exit the farmhouse that was going to be built. We mapped out the relationship between the burnt copse and the farmhouse and how big the orchard needed to be and how far that was from the farmhouse. Everything had to work for the action and for the camera”

Other Locations in the U.K. 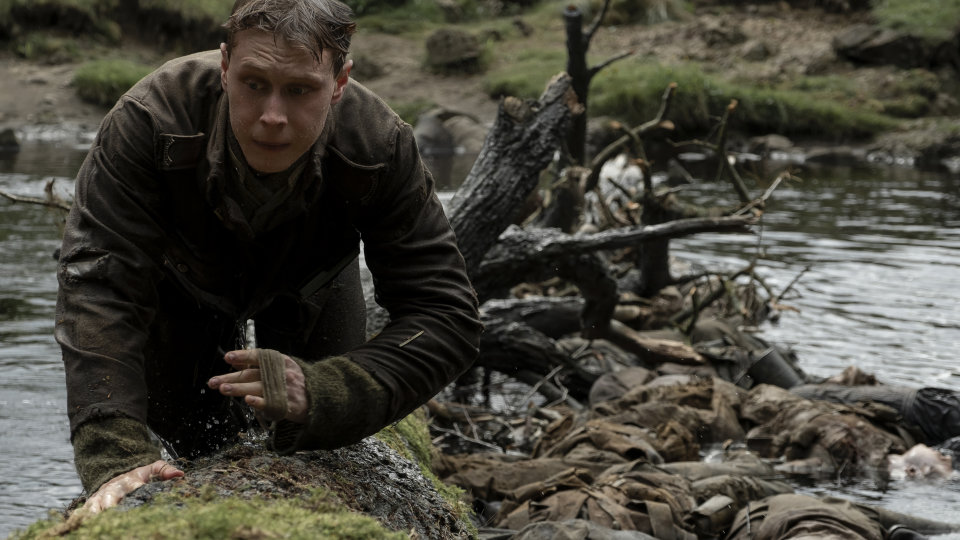 ‘1917’ made use of several other locations in the U.K. including Hankley Common, Elstead in the Scottish Highlands. Hankley Common is owned by the Ministry of Defence and managed by Surrey Wildlife Trust. It has been a film regular for a while now. In fact, Mendes also filmed one of the crucial scenes in ‘Skyfall’ in Hankley Common. It was the set where James Bond’s mansion was created.

The film also made use of the historical Graving Docks in Govan, Scotland, as the backdrop for certain scenes. A set was built from scratch around the disused dockyard and the team made use of the site for ten weeks for its production.

Around June 2019, certain sections of the film were shot in Low Force, on the River Tees in Teesdale. Low Force is an 18-feet set of falls in northern England. The scene where the characters are desperately trying to keep float against a raging river was shot around the area. The team had to install signs warning walkers to not alarmed by bodies around the site as they were a part of the production.

The only indoor location where ‘1917’ was filmed is the famous Shepperton Studios in Surrey, England. The Studios have previously been used for movies the James Bond films, along several others. They were used for interior filming, which involved weeks of arranging and rearranging cardboard boxes to form makeshift trenches on the sounstange.

None of the locations in ‘1917’ are repeated, and they follow the order of the story, with the camera constantly following each movement of the characters. This creates a sense of urgency as we, along with the characters, are constantly on the move. At the same time, it doesn’t offer us any release from the disorienting environment it creates.

The way ‘1917’ choreographs its spaces to meet the urgency of each of its movement through the continuous shot, is definitely one of the biggest feat in cinema in the past years. Of course, using continuous shots have a long history, with Hitchcock’s ‘Rope‘ and Iñárritu’s ‘Birdman‘, but no one till date has achieved it the way Mendes has, never at such an epic scale, and never to create such a staggering effect.