Where Was Hallmark’s A Dickens Of A Holiday Filmed? Who is in the Cast? 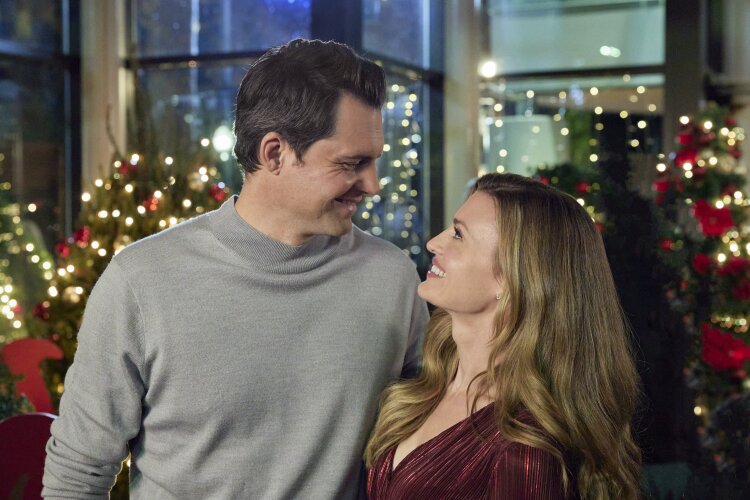 With its Countdown To Christmas line-up, Hallmark is indeed a holiday movie haven for audiences of all ages. Every year, it produces an exciting lineup of fun-filled Christmas movies, and ‘A Dickens Of A Holiday!’ is one of them. The story is set in Dickens, Ohio, where the townsfolk enthusiastically celebrate the annual Victorian festival called Dickens Days to honor the great author Charles Dickens. The festival culminates in a theatrical performance of ‘A Christmas Carol’ by the community. On its 100th anniversary, director Cassie finds herself in a fix when the lead actor, who plays Scrooge, falls sick and drops out.

Cassie then reaches out to her former high school classmate, Jake, who is an action movie hero in Hollywood. When Jake returns home to work with Cassie, they initially have a hard time adjusting to each other’s process. But over time, working together on the play makes them realize their highest potential, as well as their love for each other. With a quaint town in Ohio as its backdrop, the Paul Ziller directorial beautifully brings together the Victorian charm and backstage romance. In case you’re wondering where ‘A Dickens Of A Holiday’ was filmed, we’ve got you covered!

A Dickens Of A Holiday Filming Locations

Although the film is set in Ohio, ‘A Dickens Of A Holiday!’ was entirely filmed in British Columbia, specifically Vancouver and Abbotsford. Principal photography of the movie commenced in early October 2021 and was supposedly completed by October 22 of the same year. The province is a hotspot for film and TV production. It has an established network of production crew and artists, technologically well-equipped shooting setups, and a plethora of landscapes that serve as picturesque backdrops for filming.

The province of British Columbia also provides considerable tax concessions on film and television production and is thus is a thriving place for the film and TV industry. Here is a detailed look at the filming locations of ‘A Dickens Of A Holiday!’

‘A Dickens Of A Holiday!’ was extensively filmed in the city of Vancouver, popularly known as Hollywood North. The lively city in the westernmost province of British Columbia is not just a seaport but is also surrounded by mountains and has a sleek urban cityscape. It is a bustling center for various performing and fine arts and is a known filming location for a lot of Hallmark productions.

The city has several film studios with state-of-the-art technology for production and a consistent cloud cover for ideal lighting. Many movies like ‘The Interview,’ ‘Mission: Impossible – Ghost Protocol,’ and ‘Deadpool 2’ were filmed in Vancouver. Some of the prominent filming locations in the city are the Britannia Mine Museum, Orpheum Theatre, VanDusen Botanical Gardens, and the UBC — The University of British Columbia.

Some scenes of ‘A Dickens Of A Holiday!’ were seemingly filmed in Abbotsford, a border city with a serene backdrop and rich history. The well-connected city hosts various events to promote arts and culture and has a mountainous landscape overlooking Mt. Baker and the Coast Mountains.

Clayburn Village and Downtown Abbotsford are two popular filming spots in the city. Popular shows and movies like ‘The Chilling Adventures Of Sabrina,’ ‘Open By Christmas,’ and ‘My Christmas Family Tree’ were shot in the city.

A Dickens Of A Holiday Cast

Brooke D’Orsay plays Cassie, the director of the community play — A Christmas Carol, who finds her confidence shaken after her lead actor exits. Kristoffer Polaha plays Jack, an action star who is in search of more substantial work and agrees to return to his hometown to work in Cassie’s play. D’orsay is known for his performance in ‘Christmas In Love’ and the hit TV sitcom ‘Two and a Half Men,’ while Polaha’s other works include the movie ‘Wonder Woman: 1984’ and the television drama ‘North Shore.’