Where Was Lifetime’s Fatal Family Reunion Filmed? Who is in the Cast? Is it Based on a True Story?

Directed by Li Dong, Lifetime’s ‘Fatal Family Reunion’ is a thriller film about a young girl named Sloane Harrington. Having been estranged from her family for a long time, she comes back to her home with much trepidation following the death of her stepmother. Though her brother David Harrington had been the one to encourage her to do so, her stepsiblings, Blake and Lexi Klein, do not seem thrilled by her presence. The family’s will reveals that Lexi has received a significant chunk of the inheritance, which makes Blake extremely angry.

Things take an even more dangerous turn when mysterious deaths start happening around the family. Sloane becomes suspicious that her stepsiblings are trying to kill her and David. This leads her on a mysterious path that might shatter everything she knows about her family. Apart from its thrilling storyline, the film does a great job of keeping the viewers hooked through its visuals. The events shown in the movie have also made many people curious if it is inspired by real-life incidents. Luckily, we are here to share what we know about the same!

No ‘Fatal Family Reunion’ is not based on a true story. In fact, the thriller movie was penned by Geoffrey Gunn, the mind behind ‘Dirty Weekend,’ and adapted into a movie under the direction of ‘Li Dong,’ who has also helmed ‘Stealing School.’ Despite being a fictional tale, the Lifetime movie does have several elements that resemble real-life scenarios. It mainly revolves around a murky inheritance situation among siblings. Such a situation is, unfortunately, something that one often comes across while going through the news. 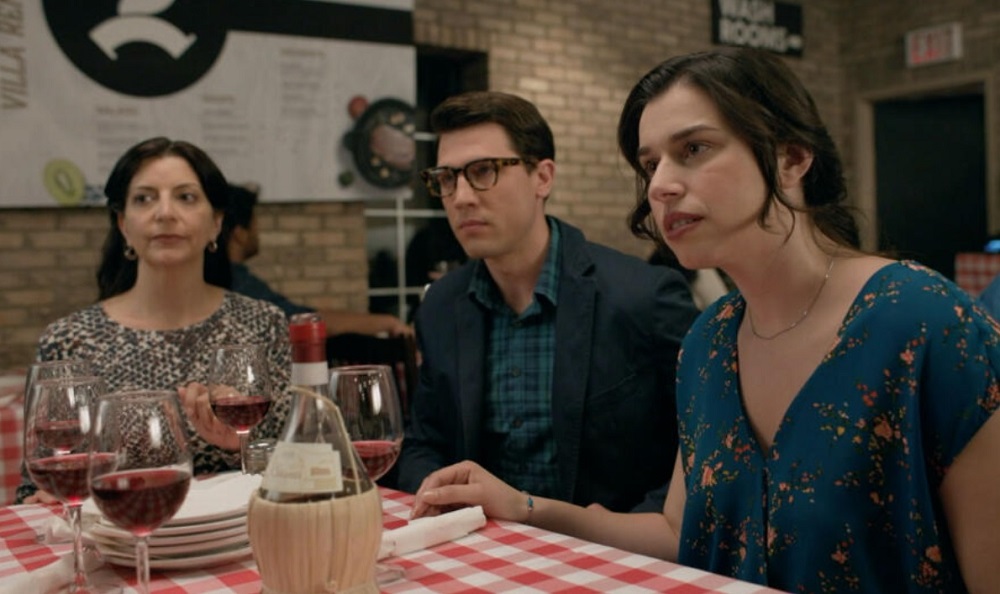 Many might also be aware of tense inheritance cases involving people they know personally. However, when the events turn as deadly as seen in the Lifetime movie, law enforcement and media often get involved. Consider the 2014 California case, wherein a man named Robert Bertrand killed his brother, Rick, and even shot his sister while arguing over the inheritance of their mother following her demise. He then ended up killing himself as well, while the sister was able to get help from law enforcement officers.

Such incidents highlight how deadly greed over expected wealth can turn into. Many families often end up on bitter terms with each other over family heirlooms or something similar. Though ‘Fatal Family Reunion’ is a fictional story, it does resemble real-life situations and criminal cases. The greed and rage among some of the film’s characters fuel the fire to an already tense situation leading to devastating consequences. The realistic script, coupled with the compelling performances of the cast members, does a great job of bringing authentic emotions and conflicts to the screen.

Part of Lifetime’s ‘Hateful and Grateful’ lineup, ‘Fatal Family Reunion’ was filmed primarily in Ottawa, Ontario. The principal photography of the movie wrapped up in mid-June 2022. Caelan Benn, known for ‘Was I Really Kidnapped?’ and ‘Mistletoe & Menorahs’ served as the cinematographer of this Lifetime production and contributed to the tension-filled setting of the film. Now, let’s explore the shooting location in a bit more detail!

The production of ‘Fatal Family Reunion’ took place in the city of Ottawa in the Canadian province of Ontario. Located on the confluence of the Ottawa River and the Rideau River, the Canadian capital has a rich history and culture that have helped the city rise to prominence. Given its strategic importance and well-developed infrastructure, Ottawa is the focal point of the Ottawa–Gatineau census metropolitan area (CMA) as well as the National Capital Region (NCR).

Additionally, O-town is surrounded by several residential areas and natural havens that allow people to enjoy a bit of everything. This is also one of the main reasons why the city is quite popular among filmmakers. Not only does Ottawa have some of the best facilities in order to record a film, but it also provides a variety of backgrounds that significantly reduces the amount the crew might have to spend on commute. Over the years, Ottawa has served as a shooting spot for several Lifetime movies like ‘House of Chains‘ and ‘Ice Road Killer.‘

Actress Alexandra Augustine essays the role of Sloane Harrington in the Lifetime thriller. You may recognize her from her performance in ‘Dating Beyond Borders,’ ‘Ruby and the Well’ and ‘Tiny Pretty Things.’ Brett Geddes joins Alexandra in ‘Fatal Family Reunion’ by portraying the character of Sloane’s brother, David Harrington. He is known for his work in ‘The Boys‘ and ‘Candy Cane Christmas.’

Read More: Where Was Lifetime’s Mother’s Deadly Son Filmed? Who is in the Cast?