Is Lifetime’s House of Chains Based on a True Story? Where Was it Filmed? Who is in the Cast?

Directed by Stephen Tolkin, Lifetime’s ‘House of Chains’ is a crime drama movie about the suburban McGrath family that hides many secrets. Based on their strict religious beliefs, Laura and Tye keep their six children isolated from the outside world. As they grow older, they start asking questions that lead the parents to increase their restrictive measures and commit child abuse, neglect, and imprisonment. Terrified that a similar fate might await their younger siblings, the older McGrath children hatch a plan to try and escape their confinement and seek help from the authorities.

The movie paints a harrowing picture of the consequences of fanatic religiousness. The Lifetime movie captivates the audience thanks to its stellar cast and visual settings. However, many have wondered if the McGraths are based on a real family. To answer this and many more questions, we have dived right in and procured the details you need.

Is House of Chains a True Story?

Yes, ‘House of Chains’ is partially based on a true story. The movie is inspired by the 2018 Turpin family case, though several details, including the characters’ names, have been changed in the Lifetime ‘Ripped from the Headlines’ movie. David Allen and Louise Ann Turpin had 13 children aged between 2 to 29 when the local authorities discovered their shocking actions. 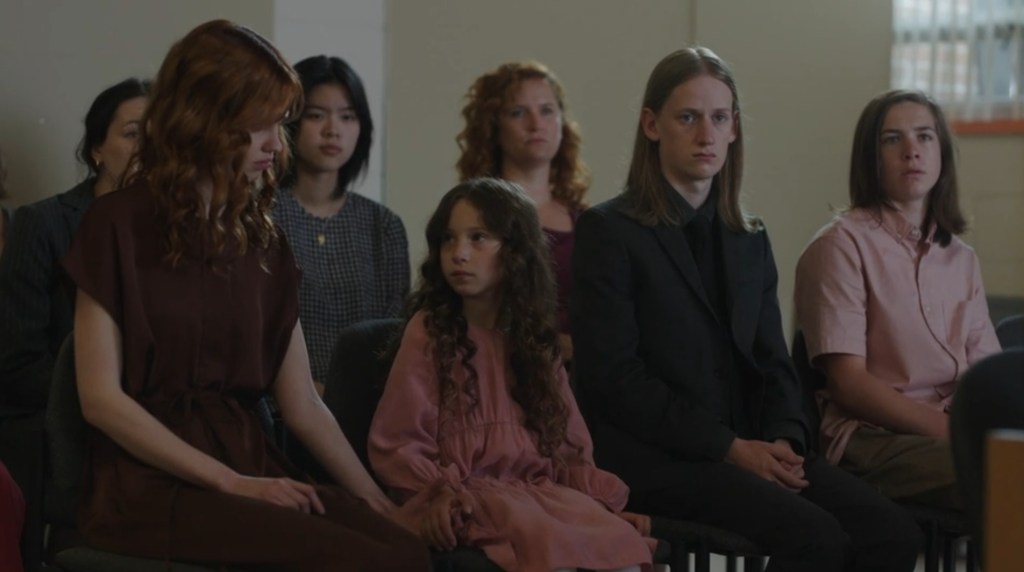 David, a computer engineer, met Louise at Princeton High School in Princeton, West Virginia, and the two got married in Pearisburg, Virginia, in 1986. Given their Christian faith, the two had multiple children, believing it was what God had intended them to do. The Turpins had ten daughters and three sons, born between 1988 and 2015. The family relocated in 2014 to Perris, California, where the escape story unfolded.

In 2018, David and Louise had planned to move again, this time to Oklahoma. However, their plans were overheard by their 17-year-old daughter Jordan, who knew it was now or never. Apparently, some of the siblings had been planning their escape for over two years, which was bound to fail if the locations were changed. Hence, Jordan and her 13-year-old sister escaped the house to contact the authorities.

While the latter soon turned around and returned out of fear, the older girl kept moving. After reaching a distance, she called the police using a deactivated cell phone she had gotten her hands on. Jordan explained that she and her siblings were being abused by her parents, giving details regarding the terrible smell within the house, among other things. When a police officer met with Jordan, she showed them the pictures she had taken inside the house.

A raid was conducted on the house by the deputies of the Riverside County Sheriff’s Department in the disguise of an apparent welfare check. What the law enforcement discovered in the house painted a horrifying picture- the property smelled like feces, trash, and rotten food, and there was garbage everywhere. The police found the remaining 12 children, out of which one had been shackled to a bed for weeks, and two others had been untied just before the police arrived.

The children had multiple injuries, their health deplorable, and their appearances haggard. The siblings were so malnourished that the police assumed they were under 18, even though more than half of them were legal adults. The house also contained journals maintained by the children, which detailed their living conditions. Their parents had imprisoned and beaten them multiple times over the years. The children were allowed to eat just once every day, and showering was an annual event.

Regardless of age, all the kids were highly underweight and lacked basic knowledge of the outside world, including the concepts of medicine and law enforcement. The Turpin parents were charged with 12 counts of torture and false imprisonment, seven counts of abusing a dependent adult, and six counts of child abuse. David also earned a charge of committing lewd actions on a child below 14 and was charged with perjury since he had filed multiple affidavits with the California Department of Education, claiming that his children were being taught at a private school.

Louise’s defense requested that she should be placed in a pretrial diversion program for the treatment of her histrionic personality disorder; the judge denied the request on the belief that she was a risk to the public. On February 22, 2019, David and Louise pled guilty to one charge of torture and three counts of willful child cruelty. They also pled guilty to four false imprisonment charges and six counts of cruelty towards an adult dependent.

The couple was given a life sentence, with a parole possibility after 25 years; presently, Louise is incarcerated at the Central California Women’s Facility, and David is serving his sentence in the California State Prison in Corcoran, California. After the Turpin siblings were provided with requisite treatment, the six minors were put in two separate foster homes, ailing from numerous health problems. Five of the Turpin children were adopted by a single family but ended up suffering severe abuse.

The foster father was accused of inappropriately touching the children and “kissing them on the mouth.” In the end, the foster family was arrested and charged with multiple counts of child abuse. Though the Riverside County Deputy District Attorney claimed in 2020 that the children were now living on their own, and getting their education, with one having graduated college, the reality might not be the same.

In an investigative piece by ABC’s 20/20 in November 2021 called ‘Escape from a House of Horror,’ it was stated that some children were facing neglect from Riverside County social services, with some living without a home. All of them were reportedly not able to access the thousands of dollars that were donated to them for their need. The money was in a trust fund controlled by a court-appointed guardian, but Joshua Turpin explained that he could not access it.

Jordan claimed that she was released from her foster home without any explanation or much-needed skills for surviving in the real world. The county hired a private law firm to investigate the claims against the social services. On July 19, 2022, the siblings filed multiple lawsuits against the foster care agency for placing the children in a known abusive household.

Multiple changes have been made between the Turpin case and the story of the McGraths in ‘House of Chains.’ For instance, there are six McGrath children compared to the 13 Turpin siblings. That and many other significant details were changed during the writing process, making the movie only partially true. Nevertheless, the portrayal of the abuse and neglect and Jordan Turpin’s heroic actions have faithfully been used in the Lifetime movie.

‘House of Chains’ was filmed primarily in Ontario, specifically in Ottawa. The movie’s principal photography seemingly started on June 13, 2022, and ended on July 5, 2022, under the working title ‘The House Next Door.’ Now, let’s explore the shooting locations in a bit more detail.

‘House of Chains’ was primarily lensed in Ottawa, the national capital city that lies in the Ontario province. The filming unit utilized some private residences as well as the old labs near the National Resources Canada office to record pivotal scenes. The talented Mena Suvari, who portrays Laura McGrath in the movie, found the production experience quite an ordeal. “It was very, very intense,” she told Entertainment Tonight. “I felt like I needed to definitely decompress for at least two hours every night.”

Ottawa is home to several residential areas that are perfect backdrops for scenes set in suburban neighborhoods. The facilities available in the city for an efficient production process, combined with the variety of locations in and around, have helped it remain one of the favorites among filmmakers to tape their projects. Apart from the Stephen Tolkin directorial, Ottawa has hosted the cast and crew of various other Lifetime movies like ‘Ice Road Killer‘ and ‘Love Triangle Nightmare.’

The talented Mena Suvari essays Laura McGrath in the Lifetime movie. You may recognize the actress from her work in ‘What Lies Below‘ and ‘The Greatest Inheritance.’ Meanwhile, Greyston Holt portrays Tye McGrath;  Holt’s other acting credits include ‘Chesapeake Shores‘ and ‘Riverdale.’

Read More: Is Lifetime’s Are My Friends Killers? Based on a True Story? Where Was it Filmed? Who is in the Cast?