Where Was Lifetime’s Safe Room Filmed? Is it a True Story? Who is in the Cast? 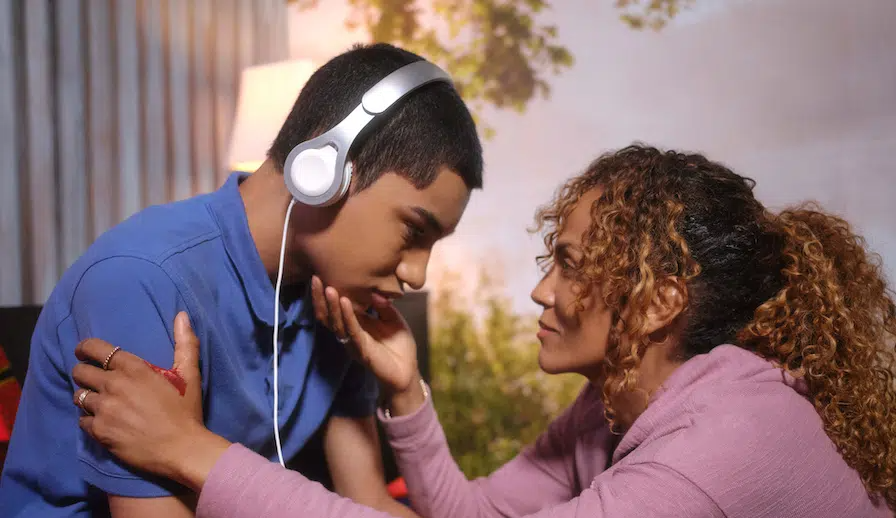 Directed by Boris Kodjoe, Lifetime’s ‘Safe Room’ is a thriller movie that revolves around a newly widowed woman Lila Jackson, who finds herself in the company of dangerous intruders when her son with autism Ian records a video of them breaking into the house across the street. So, they seek refuge in a panic room created by her late husband as Lila thinks of a way to protect Ian and herself.

Lifetime’s thrillers have intense storylines and an unnerving degree of eeriness owing to the way they are shot. ‘Safe Room’ mostly takes place inside a room where Lila and her son hide from the intruders. If you want to know more details about the filming locations, cast, and origin, you’ve come to the right place!

‘Safe Room’ was reportedly filmed over a 14 day period in December 2021. The production companies responsible for the film include Astute Films, BondIt Media Capital, and Voyage Media. If you want to know where the magic behind the lens took place, here is all the information we have gathered. Now, let us take a look at the filming locations for the movie!

‘Safe Room’ was seemingly filmed in Los Angeles. While two of the production companies, BondIt Media Capital and Voyage Media, are situated outside the city, Astute Films is headquartered in LA. Located at 1539 Sawtelle Boulevard, the entertainment agency is associated with movies like ‘Here Today,’ ‘Queen Bees,’ and ’90 Minutes in Heaven.’

During the filming of ‘Safe Room,’ director Boris shared a few exciting moments on his social media. He also used a stunt coordinator possibly to film the scenes in and around the house where the intrusion happens in the film. He was excited to direct his first movie and was overly keen on covering all the bases as a “virgin director.”

Los Angeles provides almost everything that a filmmaker could ask for. Besides having beautiful weather throughout the year, the city also comprises different geographical features such as beaches, hills, and the sea. It undoubtedly serves as the hub of the entertainment industry and is home to some of the most popular production studios, such as Paramount Pictures, Universal Studios, and Warner Brothers. A few iconic movies shot in the city include ‘Die Hard,‘ ‘Mulholland Drive,’ ‘La La Land,’ and ‘Sunset Boulevard, to name a few.

The cast of ‘Safe Room’ features Nicole Ari Parker as Lila, a newly widowed woman who finds herself in a dangerous situation. The actor is credited for her roles in ‘Remember the Titans,’ ‘Blue Streak,’ and ‘Boogie Nights.’ Nik Sanchez plays Ian, Lila’s son with autism, who spots a group of men breaking into their neighbor’s house. The young actor is mostly recognized for ‘The Rookie’ and ‘Our Christmas Journey.’

Drea de Matteo stars as Rocco, the first intruder. You must remember the actor from ‘Joey,’ ‘The Sopranos,’ and ‘Swordfish.’ Mackenzie Astin essays the role of Dominic (the second intruder) in the movie while Boris Kodjoe plays Neil Hargrove. Other actors in the movie include Monica Calhoun (Officer Armani), Junie Hoang (Ann Kim), Julito McCullum, Jalene Mack, Diamond Romano, among several others.

Is Safe Room a True Story?

No, ‘Safe Room’ is not based on a true story. The script is written by Nneka Gerstle, and the direction is credited to Boris Kodjoe. Lifetime thrillers usually comprise stories that resonate with people on a very instinctive level. ‘Safe Room’ is essentially a home invasion movie that follows a single mother and her son, who suddenly finds themselves in life-threatening danger. This genre has become popular over time because of how crimes related to home invasion have steadily continued to reach us through the news and social media. Because of how deeply it affects us, these stories have evolved into a popular subgenre of fiction.

Home is the place where we are supposed to be safe more than anywhere, but when that too is threatened, the experience can scar someone for life. Through fiction, producers and filmmakers have tried to explore societal and cultural fears, as well as reach out to the audiences. A few movies with similar themes include ‘Dawn of the Dead,’ ‘The Strangers,’ ‘Hush,’ and ‘Us.’

Another important aspect of ‘Safe Room’ is the portrayal of autism. For this film, Lifetime reached out to RespectAbility to ensure that Ian’s character is depicted as realistically as possible. RespectAbility is a nonprofit organization that focuses on the empowerment and self-advocacy of individuals with disabilities. In fact, Nik Sanchez who essays the role of Ian is on the autism spectrum, adding authenticity to the narrative. Hence, although ‘Safe Room’ is not a true story, it is socially and culturally relevant.