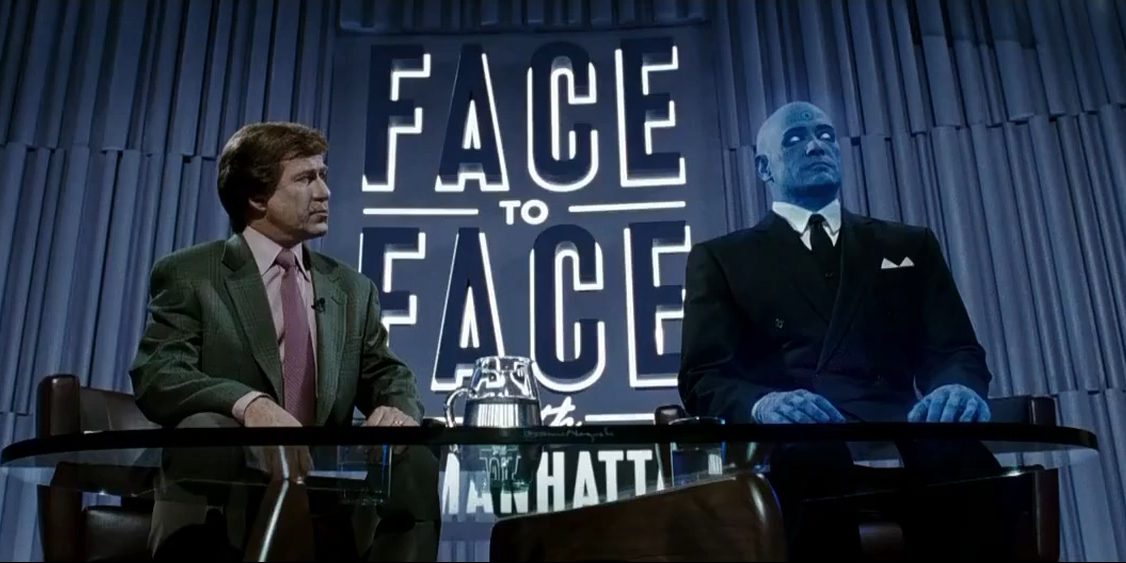 With Zack Snyder of ‘300’ fame at the helm, the 2009 noir superhero movie ‘Watchmen’ builds on the groundbreaking graphic novel of the same name by Alan Moore and Dave Gibbons. The story chronicles an alternative history while occasionally transporting the viewers to Antarctica and even Mars. Before the Second World War hits the planet, the US employs costumed superheroes named Minutemen. From the Minutemen derive the titular team of Watchmen in the final days of the Cold War.

After the US wins the Vietnam War, the media oppresses them, and the state declares vigilantism illegal. With the impasse, the ostracized heroes must struggle to come to terms with their unique powers and ancient glory. Featuring a star-studded cast ensemble in various roles and painted with 80s nostalgia, the superhero movie stands apart from other genre installments. However, you may wonder where the movie was filmed. If the question is bugging you, let us probe deeper.

‘Watchmen’ was filmed in and around Canada, especially British Columbia. After some delay, principal photography commenced on September 17, 2007, and production came under wrap by February 19, 2008. Larry Fong, who worked with Snyder on ‘300,’ handled the cinematography for this movie. Alex McDowell of ‘Fight Club’ fame served as the production designer.

According to reports, ten visual effects companies, including Sony Pictures Imageworks and Intelligent Creatures, took up various production parts. One thousand one hundred shots featured visual effects of a remarkable kind, while a quarter of them was computer-generated. Let us now take you to the specific locations where the movie was filmed.

Most of the filming of ‘Watchmen’ took place in and around Vancouver, the picturesque seaport city in British Columbia. The crew meticulously constructed a New York City backlot to film several scenes. Several sequences were filmed at Nat Bailey Stadium, a baseball stadium located at 4601 Ontario Street in Vancouver.

The Bloedel Conservatory, a botanical garden and aviary situated at 4600 Cambie Street at the top of Queen Elizabeth Park, lent its premises for filming additional scenes of the movie. Moreover, one of the sequences was shot at the Marine Building, a towering skyscraper located at 355 Burrard Street in Downtown Vancouver, near the Financial District.

The cast and crew occasionally ventured out of the base at Vancouver. They filmed several scenes, including interior studio sequences, in the city of Burnaby in the Lower Mainland region of British Columbia. To facilitate filming, the production team took hold of the British Columbia Institute of Technology, a public polytechnic institute situated at SouthWest 3, White Avenue, in Burnaby.

A portion of filming also took place in Canadian Motion Picture Park Studios, a vast movie production facility located at 8085 Glenwood Drive in Burnaby. Interiors of apartments and offices were constructed from scratch on sound stages, while the crew used green screens to film the Mars and Antarctica scenes. The vast studio is spread across 350,000 square feet of facilities, including 18 fully equipped soundstages.

In a memorable sequence in the movie, Dr. Manhattan reappears at a military base after his accident. The sequence was filmed near the Crease Clinic, the old Veteran Unit building in the premises of Riverview Hospital in Coquitlam. A mental health facility situated at 2601 Lougheed Highway, the Riverview Hospital, was closed in July 2012. However, it has always been a popular filming destination, featured in blockbuster movies like ‘Deadpool 2’ and ‘The Butterfly Effect.’

The production team also filmed several scenes in the municipality of New Westminster, around 21 kilometers southeast of Downtown Vancouver. Filming of a few scenes took place in The Terminal Pub. Once a bustling pub located at 115 12th Street, the venue has been permanently closed. The crew also filmed in the premises of Tanex Industries, a molding supplier located at 1017 Royal Avenue in the suburbs of New Westminster.