Who is Black Eyed Mog in The English? What Happened to Her Eyes? 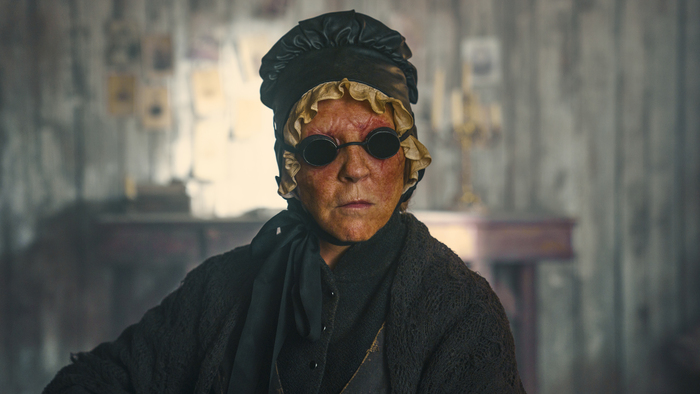 ‘The English‘ is a Prime Video show created by Hugo Blick and centers on Cornelia Locke (Emily Blunt), who wants to avenge her son’s death. Eli Whipp (Chaske Spencer), a Native American and an ex-American soldier, accompanies her from Kansas to Wyoming, where the man responsible for Cornelia’s son’s death resides. As the place is about a month away, they spend days riding through different towns and states and encountering dangerous people who threaten Eli and Cornelia’s lives.

One such person is Black-Eyed Mog, who resides in Oklahoma. Cornelia sees Mog with her two sons when she is going to return two German girls to their family. Although Cornelia doesn’t see Mog’s face because the latter is standing atop a hill, the audience sees her terrifying eyes. The eyelids are missing, and the skin around the bulging eyes seems scarred. So, who is the Black-Eyed Mog, and what happened to her eyes?

What Happened to Black-Eyed Mog’s Eyes?

Black-Eyed Mog is likely a Welsh immigrant tortured by the Native Americans, specifically the Cheyenne. The Cheyenne sliced her scalp, cut her eyebrows, and also brutally injured the skin around her eyes. She always wears a hat and a pair of black glasses to shield this image. She and her two sons do illegal business in Oklahoma, including abducting and killing Native Americans. Inside her compound, there’s an entire wall with the scalps of over 50 Native Americans.

Black-Eyed Mog’s biggest rival is Kills on Water, a man from the Cheyenne tribe who also runs his business in the same area. When Cornelia is busy reuniting the girls with their family, Eli waits at a farmer couple’s house. However, he remains unbeknownst to the fact that John and Katie work for Kills on Water, who has been looking for Eli for some time.

So when Cornelia leaves with the girls, they find a chance to make Eli unconscious and send him to Kills on Water. At the Germans’ place, Cornelia learns that the farmers are the people behind some of the killings in the area. Almost instantly, she realizes that Eli’s life is in danger and rides back as fast as she can. On reaching the farmers’ abode, she stabs Katie while trying to extract information from her and interrogates John.

Meanwhile, Eli is in Kills on Water’s compound, and the latter has a job for the ex-soldier. For Eli to earn his freedom, he must kill Black-Eyed Mog. In the following scene, we see Cornelia talking to Black-Eyed Mog, and the latter narrates the story behind her eyes, scalp, and the scalps of all Native Americans hanging on her wall. However, Mog is confused about Cornelia’s presence, and now it’s the Englishwoman’s turn for an intriguing monologue.

Cornelia Locke mentions how John reveals Eli’s whereabouts and the motive behind his capture. So, instead of going to Kills on Water and trying to negotiate with him, she decides to pay a surprise visit to Mog. Black-Eyed Mog is known to have eyes on everything and is pretty good at calculating the opponent’s move. However, this also proves her weakness because Cornelia is aware of Mog’s strengths and predicts that she will be confused upon seeing a young and seemingly fragile Englishwoman at her doorstep.

As Cornelia explains this, Mog realizes just a split-second late that the former has a shotgun under the table. Cornelia shoots the woman dead and also kills her two sons. After this, Lady Locke takes Black-Eyed Mog’s infamous glasses and drops them inside Kills on Water’s compound, thus rescuing Eli Whipp.

Read More: Do Cornelia and Eli Die in The English?