Do Cornelia and Eli Die in The English? 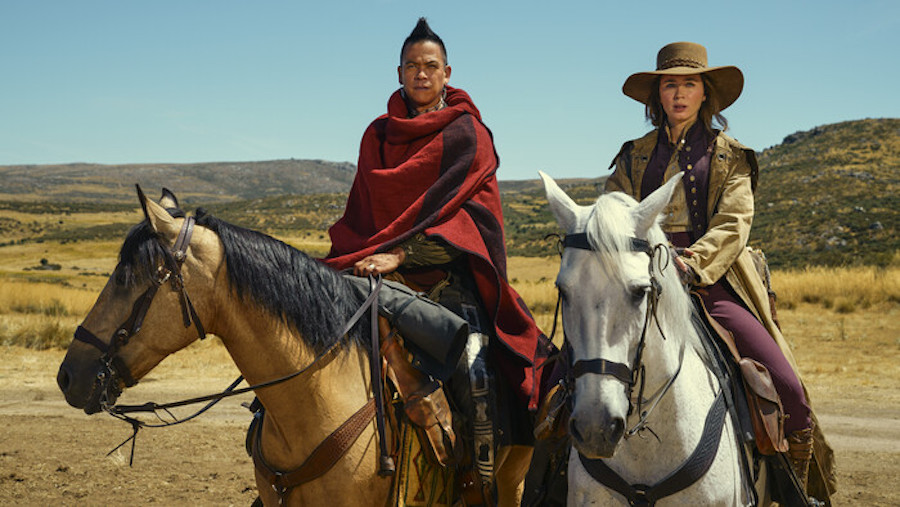 Prime Video’s ‘The English‘ is a Western TV series about two people from entirely different worlds who cross paths and discover how their destinies are intertwined. On the one hand, Cornelia Locke (Emily Blunt) is an Englishwoman who seeks vengeance against the man who killed her son. On the other hand, Eli Whipp (Chaske Spencer) is an ex-soldier in the American army who wants to go back to his hometown and claim what’s his.

Set in 1890, the 6 part series follows Eli and Cornelia as they go from Kansas to Wyoming while encountering dangerous people who almost always want to kill the two. In the first episode, Eli mentions how he’s lived in America all his life and has seen all his family members die. Eli tries to warn Cornelia because America is a dangerous country for her. Thus, to see a man and kill him is not everyone’s cup of tea. However, the Englishwoman doesn’t budge, which makes the audience wonder whether Cornelia and Eli die in the end. SPOILERS AHEAD

Does Cornelia Die in the End?

Cornelia doesn’t die in the end but suffers from a terminal illness called syphilis. The disease has four stages and causes soft tissues and bones of the face to erode. At the show’s end, we see her in a veil; underneath it, her face is covered with a thin bandage. Thus, it is likely that she might soon succumb to the disease. The story behind this disease goes back to 1875, 15 years before the present.

When Thomas Trafford, Kelly, and David Melmont, go from England to Wyoming, US, to start their own business, we see Thomas and David get into a verbal tiff. The latter seems to be an aggressive, almost animalistic character who knows no civility. The three discover a place called Chalk River, where the Cheyenne tribe lives. While David wants to go and stir some trouble in the place, Kelly and Thomas stop him from doing so.

However, later, three soldiers looking for a Cheyenne man meet the three Englishmen, and David seizes the opportunity to lead the soldiers to the Cheyenne settlement. While Thomas and Kelly stay back, the remaining four go to the village and wreak havoc by massacring the Cheyennes. After the bloodbath, they have illicit sex with a woman called Black Widow, a sex worker at the local brothel. The four men are unaware she has syphilis and thus contract the disease.

Later, when David meets Cornelia, whose father is investing in Thomas’ business, the latter finds out about the incident and threatens to expose David. Melmont then rapes the Lady and impregnates her, thus passing the disease to Cornelia and her son. Cornelia’s son suffers from the disease for 14 years, after which he dies, and Cornelia herself is slowly succumbing to the disease.

In the showdown between David and Cornelia, another victim of David’s actions shoots him from behind. The bullet pierces through his chest and bounces off of Cornelia’s locket. Thus, Cornelia lives to see another day, but due to the illness, she is practically dying. We do not know when her body will ultimately give in. Eli Whipp is also involved in this face-off, but does he die?

Does Eli Die in the End?

Eli doesn’t die in the show. The Native American man travels toward Nebraska, where his hometown is located. Since Eli has served in the American army during the war, he has come close to death quite a few times. Moreover, all his family members died due to violence or sickness. However, none of this happens to Eli. The ex-soldier is also connected with David Melmont in a bizarre way.

After the massacre at Chalk River, the three American soldiers and David Melmont return, and they see Eli Whipp on their way. At first, they wonder if they should be cautious because the Cheyennes are Native Americans like Eli. However, since Eli also serves in the US army, they give him the benefit of the doubt and ask if there will be a problem between them. Eli simply says that whatever they did is not his problem, and he just wants to mind his business.

Although this meeting is brief, it does affect Eli because of the sheer brutality of the four men’s actions. In the final fight, when David is shot, he doesn’t die immediately, so Eli takes it upon himself to stab Melmont with a broken sword. After helping Cornelia, Eli decides to go to Nebraska and claim a piece of land because he served in the US Army.

Read More: Where is The English Filmed?