Who is Taco in ‘The Masked Singer’? Clues and Guesses 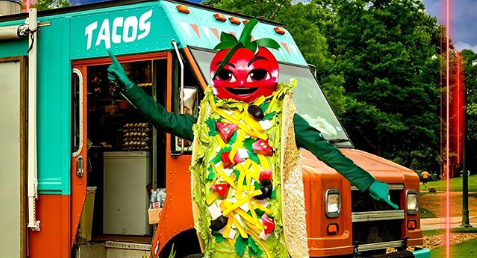 ‘The Masked Singer‘ Season 3 is in full sway and we are about to see Group B perform. The best part about the show is how it keeps some characters shrouded in secrecy, enough to fool the most inquisitive minds on the internet. Even after seeing Turtle on the stage for three performances, we are not certain about his identity.

Similarly, in the new group, we have Taco, who has left fans absolutely befuddled. The clues or the costume do not give much away about the participant. Naturally, you might be wondering about who could be behind the Taco mask. We have got you covered in that regard, as we bring all the clues and guesses.

When it comes to clues about Taco, there are virtually none. All we see is a performer in a Taco outfit, standing in front of a Taco truck, striking a pose. It could be a man or a woman. However, we believe in closer analysis and giving our readers all the details. Therefore, upon examining the message “I’m gonna Guac your world”, it can be deduced that Taco might like rock music, making a pun with ‘guac’. Check out the message below.

What we understand from this is that Taco is confident. From the way the participant strikes a pose, one can also understand that Taco is sassy. Moreover, if we see the image clearly, there is a shirtless man running away in the background. We don’t know if that is indicative of anything, but it is remarkable enough to stand out. Check out the image and see if any other clues become evident to you.

With so few clues about Taco available, netizens have been scratching their head to understand who it might be. One even went ahead and stated that they have no clue about the identity behind this spicy costume. Check it out below.

However, people on Reddit seem to have an opinion of their own. They have come to the conclusion that Taco is most likely to be Danny Trejo. Well, Trejo is known for playing the role of a fiery Mexican in several movies, so it would not be too strange to see him dressed up as a Mexican dish, vis a vis, a Taco. More importantly, the star has his own taco business called Trejo’s Tacos, which is available in multiple locations, and could be the reason why the star has picked this costume.

In the Instagram post itself, fans have come up with myriad other guesses, including LeBron James and George Lopez. However, considering that LeBron is a busy man during the game season, it seems unlikely that he has had time for the show. Moreover, since Taco is a food item, and the participant poses in front of a food truck, there is always a chance that Taco might turn out to be a celebrity chef.

Among one of the better guesses, is one which claims that Taco might be Ellen DeGeneres. After all, the famous talk show host is sassy and has a quirky enough sense of humor. Moreover, an observant fan was quick to point out that Ellen has been having quite a few guest hosts on her show. According to the fan, her absence on her own show is because she is up on stage, performing as Taco. Check out the tweet below.

@TheEllenShow I have noticed that you have been having a lot, 4, guess host on your show lately. I think you could be The TACO on The Masked Singer in group B. Do you have any comments on this? Are you The Taco Ellen?

All that being said, it is irrefutable that the clues about Taco are not concrete enough at the moment for us to have a solid guess about who it might be. These are the best theories at the moment, but we will undoubtedly be closer to deducing Taco’s identity once the performer presents us with the clue package, and sings a song in the upcoming episode of ‘The Masked Singer’.

Read More: Who is Banana on The Masked Singer?