Are Asier and Irene From Love Never Lies Still Together?

Netflix’s ‘Love Never Lies: Destination Sardinia,’ AKA ‘Amor con Fianza: Destino Cerdena,’ tests the concept of love to the extreme. The Spanish reality series welcomes several couples to spend some time apart and enjoy the company of bachelors for half the show. While one partner is surrounded by temptations, the other half is shown some clips of they are spending their time, which is deliberately meant to shake their trust. The dating show also uses a lie detector test called “eye detect” to get the truth of some uncomfortable questions that contestants have to answer.

The first season of the series featured many intriguing couples, including Asier Sarmiento and Irene Gomu. The couple’s journey from start to finish may not have been as easy as they may have wanted, but it certainly served to entertain the viewers. Naturally, the public is eager to know if the pair is still in a relationship, and we are here to answer the same!

Asier and Irene entered ‘Love Never Lies: Destination Sardinia’ at the ages of 26 and 22, respectively. Their main goal behind participating in the grueling experiment was to prove their love for each other and hopefully use the whole experience as a turning point for their relationship. During the first “eye detect” session, Irene shared that she felt her life would be easier had she not been in a relationship with Asier. The latter said he could understand the sentiment as their time together has been far from smooth.

It was also revealed that apart from cheating on Irene once, which she knew about before the show, Asier had once again met up with a girl and had planned on sleeping with her. However, he decided to not cheat as he was afraid of what Irene would do. Learning about this, Irene could not understand why Asier had hidden this from her. Soon after this, the couples were separated, and Asier had to stay in the original villa where several bachelors would shortly make their entry.

Initially, it seemed that Asier might develop a connection with Belén, a single woman, and the two even shared a bed. When Irene was shown clips from the same, which did include some risque scenes, she confessed that her boyfriend did not actually seem much interested in Belén, and she still trusted him. As it turns out, Asier felt more connected with Sara, another participant, and hoped to develop a bond with her. This shocked Irene and Guillem Morell, Sara’s boyfriend, when they saw the close bond between their partners. 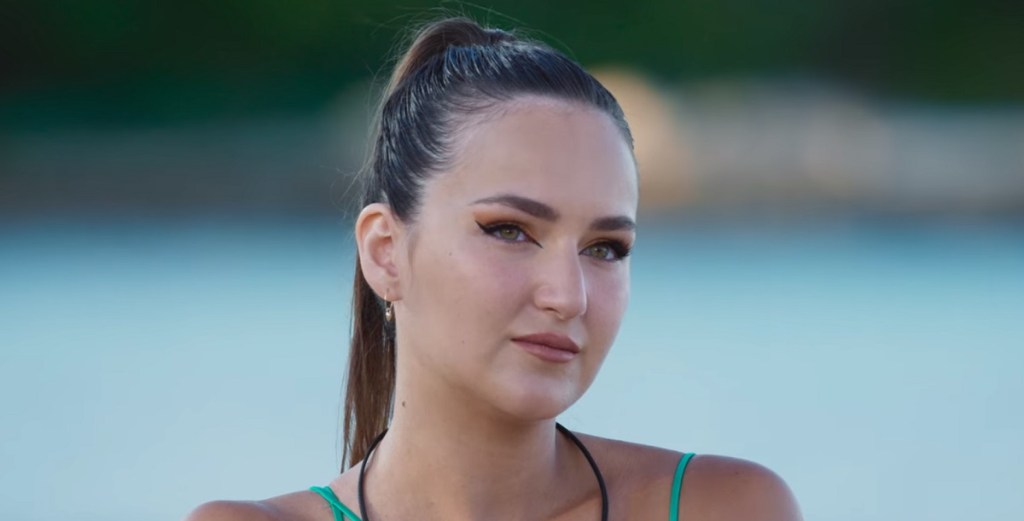 However, the connection between Asier and Sara seemingly fizzled out as the latter became more interested in Aitor. Just before the two groups of participants would switch houses, Irene was shown Asier’s answers to two more “eye detect” questions. This revealed that Asier had sent provocative pictures to other girls while still with Irene and that he had thought about sleeping with Sara in order to see if he truly loved Irene. Irene was heartbroken by this, but she did comment that all interactions between her boyfriend and Sara seem to have been initiated by the latter.

After the houses were switched and the roles reversed, it was time for Asier to see glimpses of what Irene was up to. In the first part, he was shown her getting closer to a bachelor named Álex. However, Asier did not think that Irene was doing something untoward and refused to see the premium version. Next time, Asier was informed about Irene getting closer to Rocío, a single woman. Asier said that he already knew that Irene was sexually attracted to girls and that she had been involved with a girl during the first phase of their relationship, which was apparently open at that time. He still declined to see anything further and reiterated his trust in Irene. 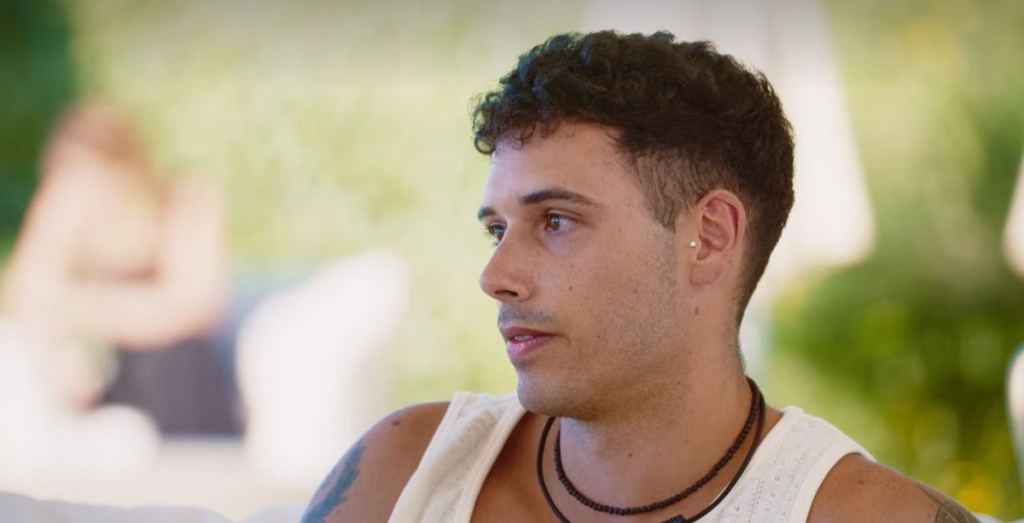 Asier did seem to develop a close connection with Lucía, but that did turn into anything romantic. Just before the finale, Asier was shown some of Irene’s confessions and her “eye detect” answers. The former revealed that Irene felt she was being used as an emotional crutch by Asier and that she was in a fake relationship. This troubled Asier, who confessed that a few years ago, he had not been doing well mentally, and for him, Irene had been his rock. However, he had not realized how much she had suffered due to that.

The lie-detection sessions also shed light on the fact that Irene apparently had a fake social media profile that she used to spy on Asier. Her boyfriend did not see the logic behind it, as he admitted that he had deleted conversations in the past but didn’t think a fake profile would help with that. When Irene agreed that she valued the fame and money she might get from the show over her relationship, Asier was hurt, but he commented that a part of him understood the situation and that he hoped to give Irene what she wanted. 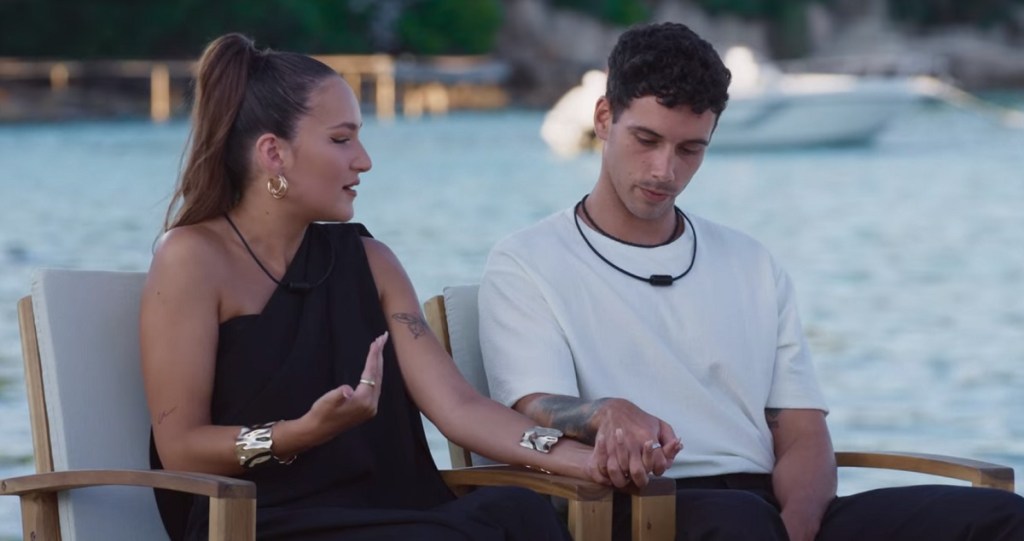 When the time came for the couple to reunite, they were delighted to see each other. Ready to face what comes next, the couple was shown the final sessions of “eye detect” tests. This revealed that Asier wanted to have an open relationship because he did not think that Irene was enough for him. Asier went on to explain that he only meant the answer when it came to the sexual part of their relationship.

Host Mónica Naranjo then shared some clips that showcased just how close Asier had grown to Lucía. However, he firmly stated that he would not date her if he was single and would not have a relationship with her should their relationship become open. This was because Lucía was just a friend to him. The “eye detect” session also revealed that Irene allowed Asier to cheat since it played in her favor when others were concerned. Irene reaffirmed the statement and said she would rather have an honest partner who cheated rather than let everyone know that she was breaking up due to her partner’s infidelities.

Are Asier and Irene Still Together?

Fans will be delighted to know that Asier and Irene are still dating each other. The duo is still a part of each other’s following list and has pictures featuring each other. Out of almost every other couple on the show, the issues between Asier and Irene were comparatively fewer. Additionally, their trust in each other was quite strong. Both of them were quite appreciative of their time on the show and seemed to achieve what they wanted through the experiment. They did seem to be planning on having an open relationship but only for the physical aspects of it.

As of writing, the couple is based in Madrid, the capital of Spain. Irene is presently working within the Creative Marketing, along with Comprehensive Design and Fashion, industries. Her impressive social media following has also allowed her to promote different brands over the years. The couple seems to enjoy traveling and partaking in delicious dishes.

Read More: Are Vicky and Inma From Love Never Lies Still Together?