Are Zooey Deschanel and Jonathan Scott Still Together?

Zooey Deschanel and Jonathan Scott are both ultra-famous television personalities who surprised their followers by officially announcing their relationship in 2019. In addition to living together, they recently appeared on ‘Celebrity IOU,’ and it feels more like a Christmas gift to the fans than a work project. The Canadian construction contractor has been hosting the show with his twin brother, Drew Scott, for almost a year, on which they extend their renovation expertise to top Hollywood stars.

The show follows the industry A-listers like Brad Pitt, Melissa McCarthy, Justin Hartley, Allison Janney, etc., as they surprise their loved ones with a spectacular home renovation. HGTV provided Jonathan a golden opportunity to flaunt his charming girlfriend on its second season as she is all set to impress her best friend, Sarah, with her beau and his brother’s skills. After it aired on December 14, 2020, we were fascinated to know more about Zooey and Jonathan’s love story, and here is everything we found out about them!

Zooey Deschanel and Jonathan Scott: How They Met?

Zooey Deschanel and Jonathan Scott crossed paths on August 4, 2019, while filming for ‘The Late Late Show with James Corden.’ They were present with their respective siblings, Emily Deschanel and Drew Scott, for a segment called Carpool Karaoke on the show. Jonathan could hardly restrain himself from flirting with Zooey as her beautiful smile and charming personality caught him “off guard.” He made it so obvious (and embarrassing!) that the producer had to omit the part completely. By the time the episode aired in February 2020, the two had already started dating. 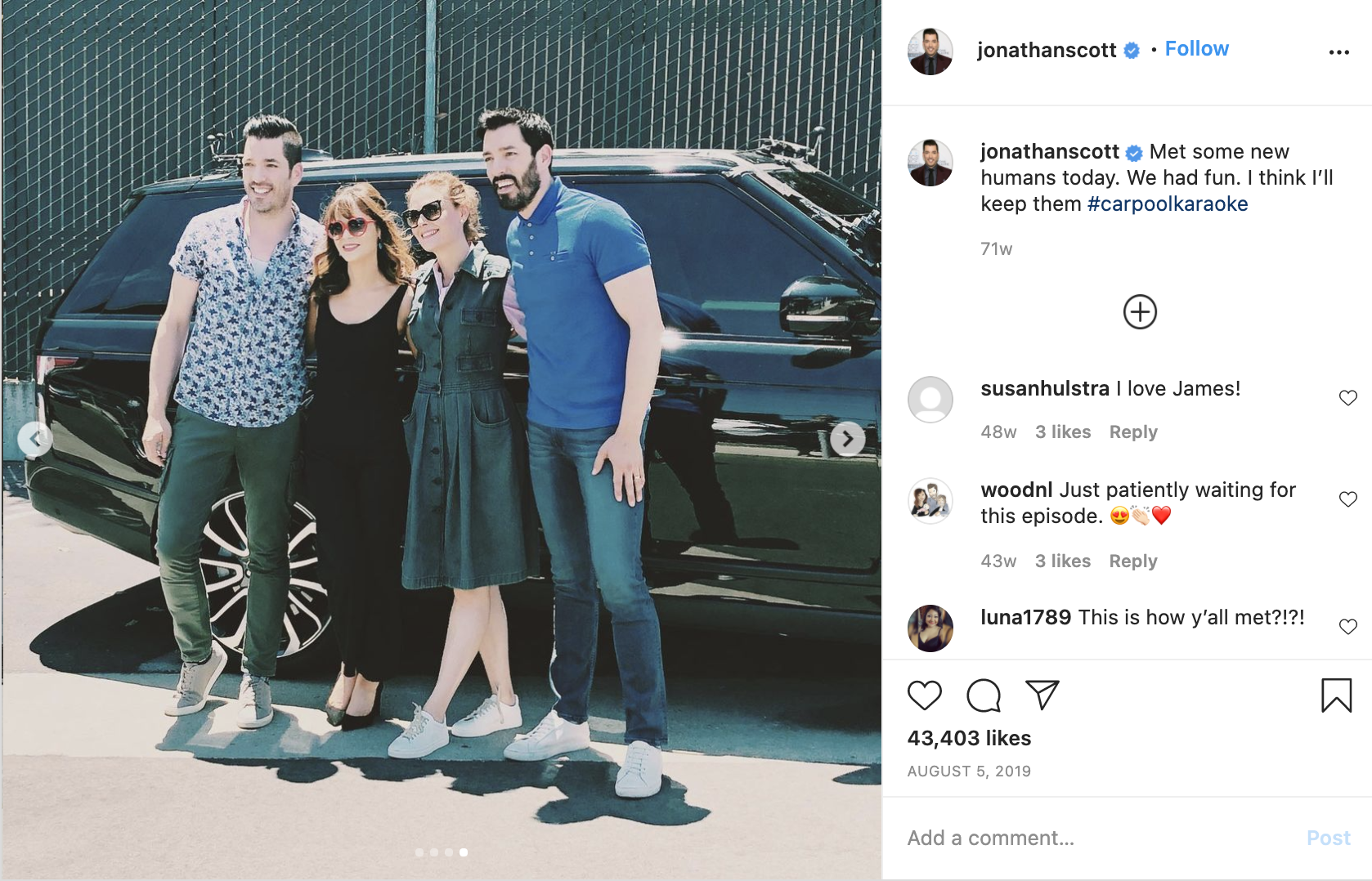 Sadly, Zooey was yet to legally part ways from her first husband, Jacob Pechenik, after four years of being together though they lived separately since January 8, 2019 (according to court papers obtained by Us Weekly.) They share two children, daughter Elsie Otter, 5, and 3-year-old son Charlie Wolf. The former couple officially announced their split on September 6, 2019, and finalized the divorce on June 1, 2020. Jonathan understood the pain of a failed marriage, having separated from his now ex-wife, Kelsy Ully, in 2010. 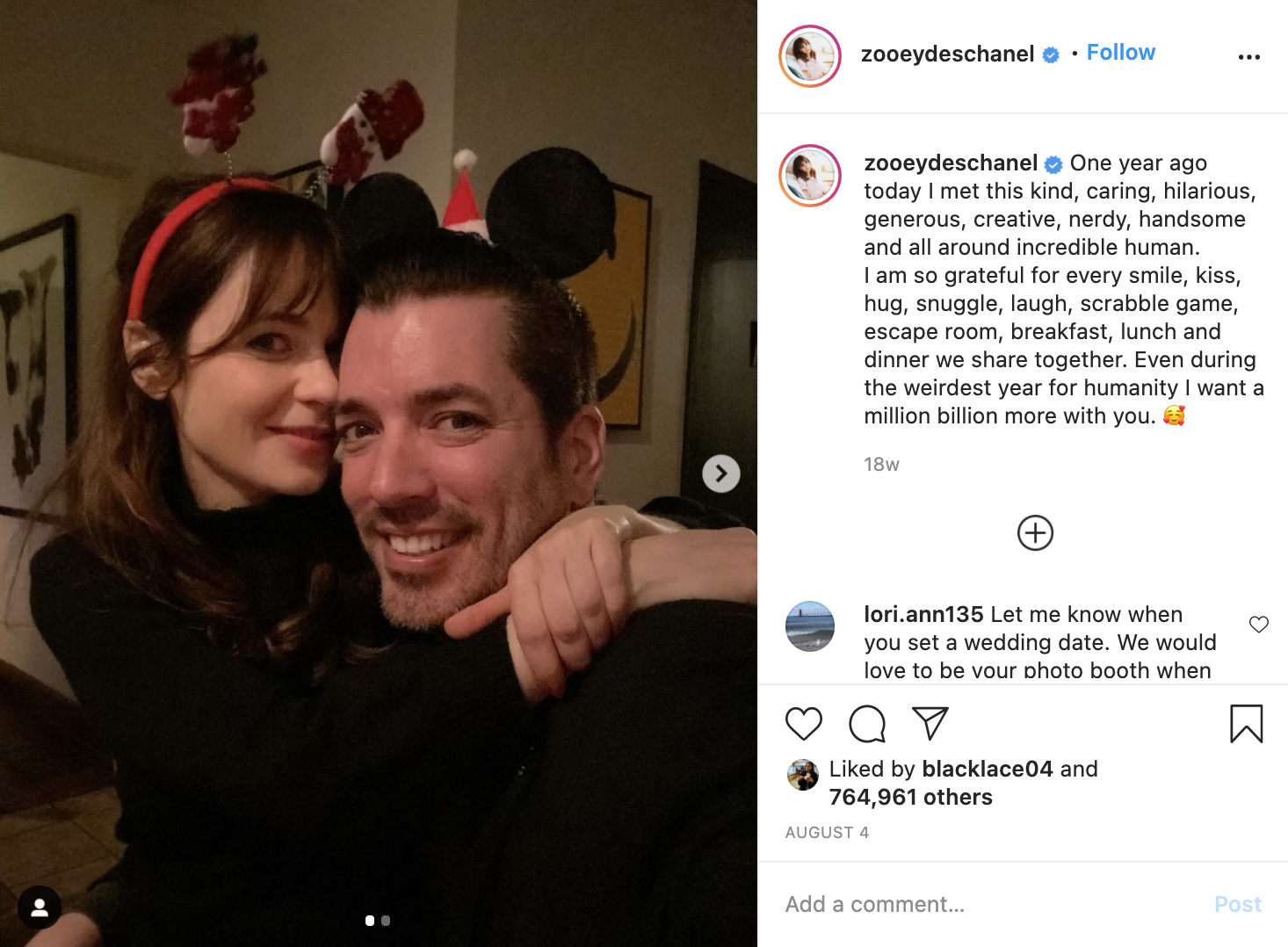 Luckily, Zooey and Jonathan got past their traumatic past relationships and bonded with one another over their love of music, film, theatre, and dogs. The duo was spotted holding hands at Silver Lake, California, only a week after the ‘500 Days of Summer’ actress declared her divorce. It would not be an exaggeration to say that they have been pretty inseparable ever since!

The duo began to make public appearances together, like going on a double date with Drew and his wife, Linda Phan, and attending Halloween Horror Nights at Universal Studios in October 2019. Zooey and Jonathan finally confirmed dating rumors by sharing a mushy selfie in November 2019. The couple made their red carpet debut at the Critics’ Choice Documentary Awards in Brooklyn, New York, on November 10, the same year.

Since making it official, Zooey Deschanel and Jonathan Scott have practically spent as much time with each other as possible. After spending their much-loved holiday and Christmas season together, they welcomed 2020 in high spirits and drunk in love. The reality TV star’s family is blissfully happy for him to have found someone as great as Zooey. 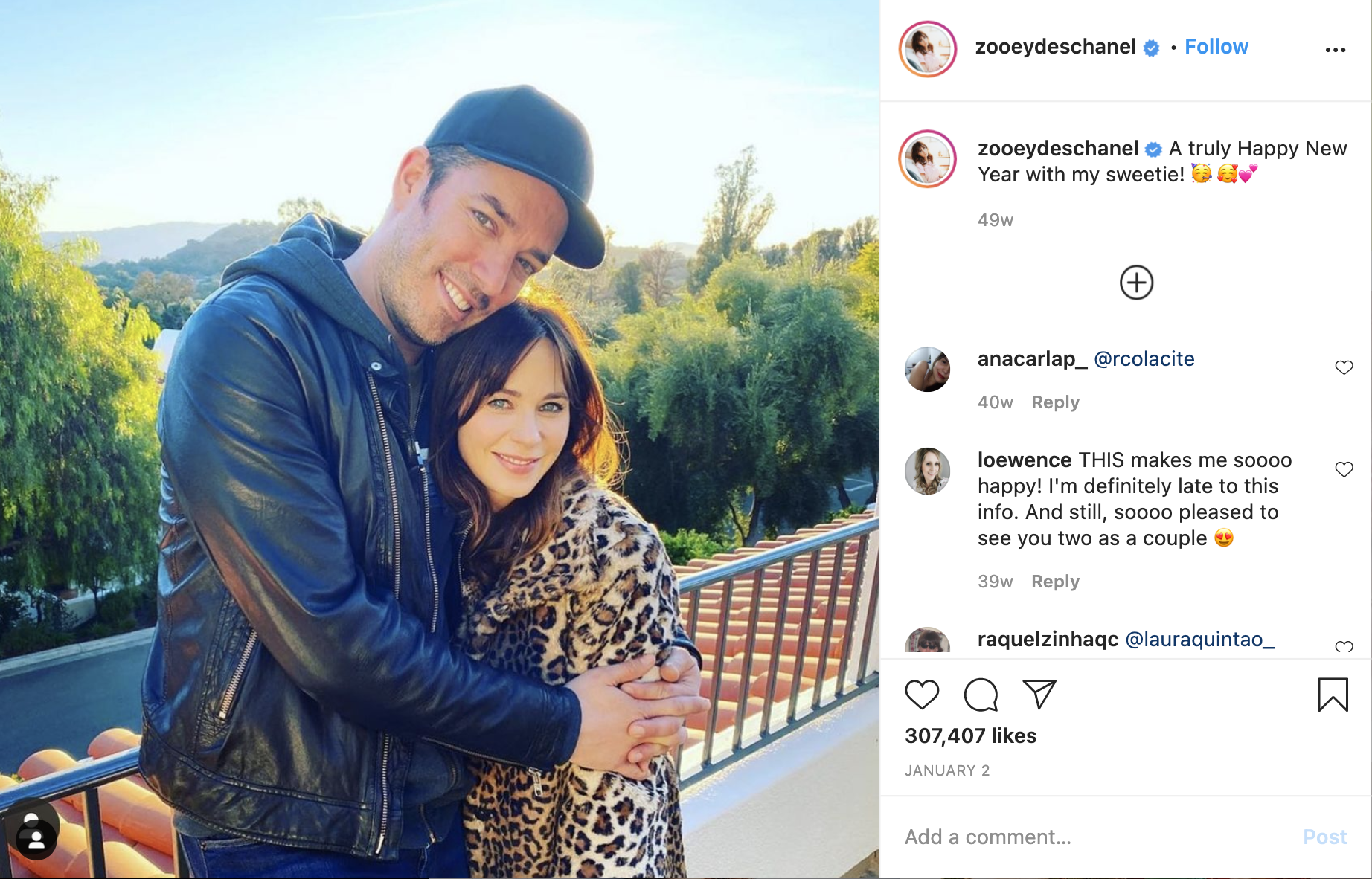 During a candid conversation with Today in January 2020, his brother, Drew Scott, said, “See this smile? I haven’t seen him smile like this in a very long time, and I think it’s amazing to see him so happy.” Jonathan celebrated one year of togetherness with Zooey by creating a video montage of their memories and sharing it on social media accounts.

How time flies when you’re having the best time of your life. Who would’ve known that exactly one year ago my life would change forever. When I count my blessings, I count you twice 🥰 pic.twitter.com/jq8lpleOjo

Seeing the silver lining to the pandemic slowing the world down, Zooey and Jonathan got the opportunity to spend months under one roof, playing games, jamming to music, and solving exciting puzzles. They love spending time with each other, and this is evident from the fact that they spent the entire quarantine cutely snuggled up. The fans were elated to witness their endearing chemistry on HGTV’s ‘Celebrity IOU.’

Mark your calendars. Set your DVRs. Tomorrow night is the season premiere of #CelebIOU…and a certain someone is joining us. Can’t wait for you to see @ZooeyDeschanel rock this reno! 🛠️💪 pic.twitter.com/ouO5g0hmis

While they continue to write heart-meltingly sweet captions for one another, tittle-tattle about their secret engagement started to make rounds. But Jonathan nipped these right in the bud during his appearance on SiriusXM’s ‘The Covino & Rich Show,’ stating, “I’m pretty confident that I will ask my girlfriend to marry me before I tell a reporter.”

Read More: Is Drew Scott Married? Does He Have Children?