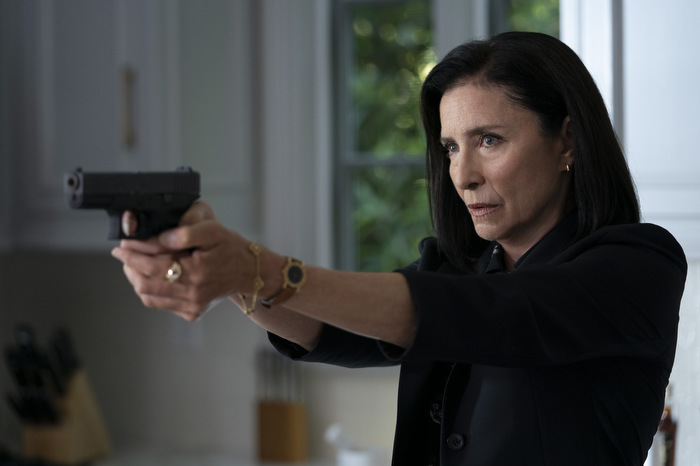 In the fifth and sixth episodes of ‘Bosch: Legacy,’ titled ‘Plan B’ and ‘Chain of Authenticity,’ Bosch (Titus Welliver) and Chandler’s (Mimi Rogers) long struggle to bring Carl Rogers to justice ends for good, but the final result is not exactly what they hoped for. Whitney Vance passes away, and Bosch is subsequently told to stop his investigation. However, when the homicide detective turned private investigator receives a whole new set of instructions from his now-deceased client, he decides to keep searching for the heir. Meanwhile, Maddie (Madison Lintz) faces a particularly difficult day at work. Here is everything you need to know about the ending of ‘Bosch: Legacy’ episode 6. SPOILERS AHEAD.

Episode 5 begins right where the fourth episode ended, with Bosch being confronted by a security guard at the closed PVC plant. As always, Bosch finds a way to get out of the difficult situation. He still has the business card given by David Creighton, the head of Trident Security. He shows it to the security guard and claims that his firm has been hired to inspect the security measures in the facility, making the other man fear for his job. The security guard subsequently lets Bosch leave.

The following day, Bosch and Chandler come up with the next stage of their plan. Chandler pays Simon Wakefield a visit to intimidate him. However, Alex and Lev spot them together and decide to kill Wakefield. Chandler visits Wakefield’s home and finds him dead. She gives his phone to Mo (Stephen Chang) to see if there is any important information there. Mo finds images of a blueprint of rectangular boxes that Wakefield sent to Rogers. The boxes later turn out to be shipping containers.

Bosch goes to see a man who was in Vietnam with Dominick and learns that the woman in the photo was a journalist. However, the man doesn’t remember her name. As the episode ends, Bosch and Mo blow up the tunnel under the TVC plant, shutting off Rogers’ most lucrative source of income for good. This forces Rogers to make a deal with Chandler and the government.

In episode 6, as Rogers goes underground, Alex and Lev’s father arrive in Los Angeles to help his sons find the man. Paulina, a batchmate of Maddie, gets shot on duty. Bosch hears the news that a female rookie officer has been shot. Fearing that it’s Maddie, he calls his daughter. The department tasks Maddie to visit Paulina’s home and tell her family what has happened. Initially hesitant, she asks for Bosch’s advice. Her father tells her that she will find the right words. And that’s what happens. She assures Paulina’s panicking mother that her daughter is alive and takes her to the hospital.

Carl Rogers is part of one of the few narratives that have made its way from the first show to the spin-off. He is a ruthless hedge fund heavyweight who hired a professional killer to eliminate several people, including Chandler. He was arrested but got out when the prosecution’s most prominent witness against him turned rogue. While he was in jail, he made a deal with the Russian mafia, and predictably, it has turned out to be a horrible idea.

Shortly after, Alex, Lev, and their father arrive. They have learned about Rogers’ eventual hideout from his lawyer, whom they tortured and killed. While the three members of the Russian mafia wait inside the container, Chandler hides outside. As Rogers arrives and is about to go in, Chandler doesn’t stop him. Rogers is soon gunned down by the Ivanovich family. Later, Chandler and Bosch agree not to tell Maddie anything about this.

Why Does Vance Make Bosch the Sole Executor of His Will?

After Vance’s death, Bosch receives an envelope sent to him by Vance’s secretary, Ida. Inside it, he finds the Vance family’s gold pen and a handwritten note from Vance, declaring Bosch the sole executor of his will. Realizing the situation requires legal counsel, Bosch visits Chandler and tells her everything. Chandler advises that they should lie low and wait to see what other parties do.

Bosch subsequently puts the letter in his safe deposit box and gives the pen and the envelope to his former partner Jerry to hide them among the evidence of one of his cases. Vance figured out exactly what type of a man Bosch was and realized that he could trust him. Moreover, Vance had learned that Bosch grew up without a father himself and would do everything to find Vance’s successor. Now that Bosch is the sole executor of Vance’s will, he can continue his search for the heir.

Read More: Who is Whitney Vance in Bosch: Legacy? Is He Based on a Real Person?