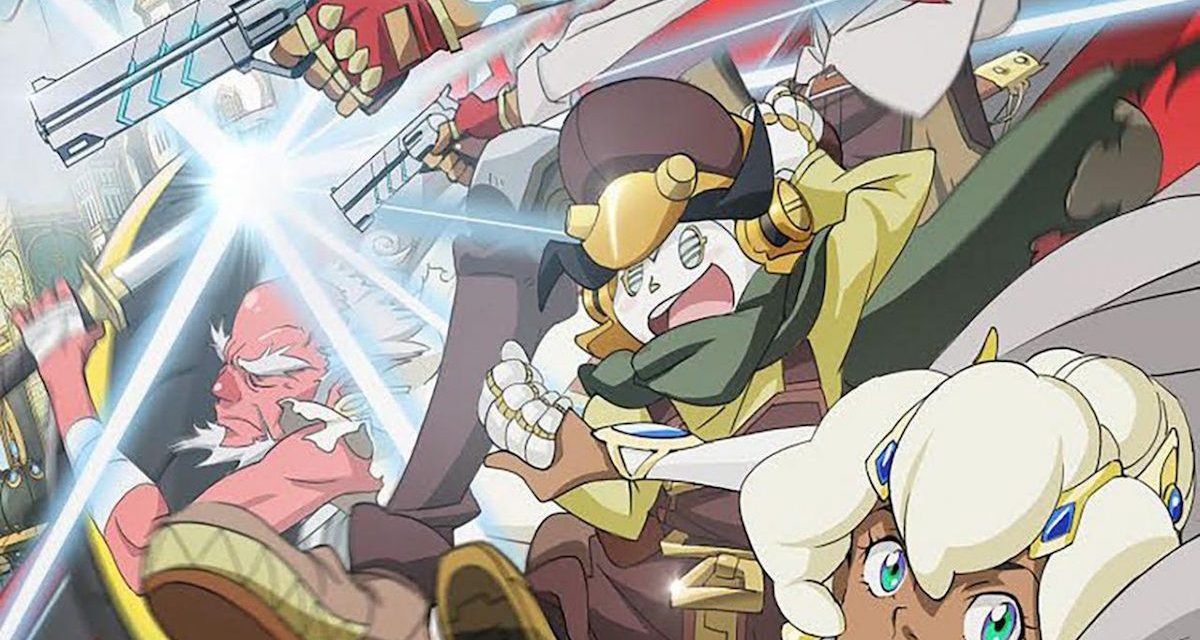 Almost every anime fan has had their eyes set on ‘Canon Buster’ since the day it was first announced. Initially, what was really appealing about it was its classic rusty appearance that reminded everyone of 90s shows like ‘Cowboy Bebop‘ and ‘Ghost in the Shell‘. And now that its first season is out already, fans just can’t get enough of its impressive world-building which, as predicted, is a lot like that of ‘Bebop’. One thing about it that really sticks with you is its deep and well-developed characters who are all unique in their own way and have this memorable charm to their personalities.

The story has an incredibly smooth pace that involves a balance of mecha-action, drama and decent humor. As the series progresses, the characters further bloom from their relationships with the others and even the anime-universe gradually expands. Undoubtedly, the visuals of this show are great because of the old-school feel that they offer and surprisingly, even the CGI during certain action scenes has been used in the most subtle ways. Though it took Netflix a long time to come out with this one, it certainly is worth the wait and is indeed a great example of all the potential that streaming giant holds when it comes to producing animated TV series.

Cannon Busters Season 2 Release Date: When will it premiere?

Cannon Busters season 1 premiered on 15 August, 2019. First published as a comic book back in 2015, ‘Cannon Busters’ has an innovative story and art style that sets a common ground between Japanese and American styles. Initially, the anime adaptation of this well known comic series was scheduled for March, 2019 but for some unknown reason, it did not premiere on the scheduled date.

Created by Thomas, who is known for creating other anime-influenced projects like ‘The Legends Of Korra’ and ‘Black Dynamite’, it has been confirmed he will be taking of Netflix’s anime projects in the future. So as of now, we can just hope that out of all of his upcoming future projects, ‘Cannon Busters’ season 2 will also be one. Since Netflix has been investing a lot on all of its recent anime projects, it seems very less likely that they’ll just give up on an anime project after just producing one season. So considering that, we should expect ‘Cannon Busters’ season 2 release date to be sometime in August, 2020.

The English Dub of ‘Cannon Busters’ is available on Netflix.

Set in the fantastic land of Gearbolt, Cannon Busters explores the unforgettable journey of a very unlikely group of travelers who set on a mission to reunite two best friends.

Samberry (S.A.M) is a high-tech friendship robot who is determined to hunt down her missing best friend, Prince Kelby, the inheritor to her kingdom under siege. In this wild journey in the outskirts of her kingdom, she is later joined by an outdated, unusually high-spirited bot called Casey Turnbuckle who is desperately looking for an upgrade. Even Philly the kid who is a 17-year-old outlaw, also known the youngest wanted vigilante in the land of Gearbolt, joins them after he realizes that he may be related to them in some way. This trio is further accompanied by the greatest swordsman of all time who goes by the name 9ine. The only reason why he is not so well known is because of his bad drinking habits and his extremely shameful past. He walks around with an oversized Cadillac Eldorado that transforms into a sentient, giant robot.

This action-fantasy, with its ‘Trigun‘ and ‘Cowboy Bebop‘ vibes, takes us to a dangerous journey of a very bizarre yet cool group, who individually are nothing but a lost cause. But when they unite with each other, they are a force to be reckoned with.

Royal Friendship robot SAM is separated from her home right after a very strong sorcerer tries to take over their entire kingdom. After she is separated from her best friend as well, Sam suddenly finds herself in the outskirts of the land and without any way of going back now, it’s on her to now find the missing prince. Along the way, she also comes across 3 new people who are willing to help her with her mission. In appearance, she has a dark complexion with blue eyes and blond hair. She is usually seen in a bright blue dress and big red shoes.

Philly is a tall brown-haired guy who just cannot die and has been on the run for ages now. He has committed countless crimes in this lifetime and is now being chased by almost all existing Bounty Hunters who wish to make a name for themselves just by catching him. But he’s been doing this for so long, he’s almost a master at escaping now. He later runs into Sam and Casey who were actually looking for him initially, but later they try to help him escape from all of his troublesome Bounty Hunters.

When he first meets the two droids, he’s a little reluctant about whether or not he should help them or not. But when he comes to know that he’s related to them and has had a deep connection with them in the past, he helps them out in every possible way he can.

Casey is an abandoned maintenance service droid who lives all by herself somewhere deep inside the forest. She was once highly demanded but has now been replaced by other maintenance bots that are far more advanced and have much better features. While collecting junk in the forest one day, she comes across a huge pile of scrap metal. After taking a closer look at it, she finds Sam. Something clicks right there at that moment and instantly, she takes a liking for Sam. That’s one big reason why when Sam asks her for help with her mission of finding the lost Prince Kelby, she unanimously agrees. And while they’re at this, she also hopes that she’ll be able to get an upgrade along the way.

Quite old in appearance, with long white hair and a lean chiseled body, 9ine is the greatest swordsman out there but is not known too well by most people. He decides to never use his sword again and spends all of his life as a ronin samurai looking for all kinds of odd jobs. Later, his path somehow aligns with Sam, Casey and Philly and this leads to him helping them out on their journey to find the missing Prince.

Locke is a huge sorcerer who has long black hair and a relatively tiny face. Heading from the darkest realms of the Southlands, no one really knows much about him. In a world where magic is almost at the brink of extinction, he seeks a very powerful magical item called the “Last Heart.” Sam and her friends must somehow get to the Prince before Locke manages to find him.