Did Kayce Kill His Brother on Yellowstone?

‘Yellowstone‘ season 4 finale puts Kayce Dutton on a path of spiritual awakening, and he seeks answers about a mysterious scenario in his life. However, to find the answers, Kayce must face the events from his past and confront his deepest fears and regrets. As Kayce seeks the promised vision, he is greeted by his dead brother, Lee Dutton.

With Lee’s recent reemergence in Kayce’s spiritual dream, it is natural for viewers to wonder about the circumstances of his death. If you wish to learn whether Kayce had a hand in his brother’s death, here’s a definitive answer to your query! SPOILERS AHEAD!

‘Yellowstone’ season 4 finale sees Kayce Dutton spending time on a cliff without food and water in hopes of receiving a vision that will clarify his connection to a wolf he has spotted on a few occasions. The wolf is said to be capable of guiding Kayce and explaining to him the purpose of his life. While Kayce awaits the promised vision, he finds himself trapped in his own thoughts, which manifest as bad dreams. In one of these dreams, Kayce’s brother, Lee Dutton, appears to him. 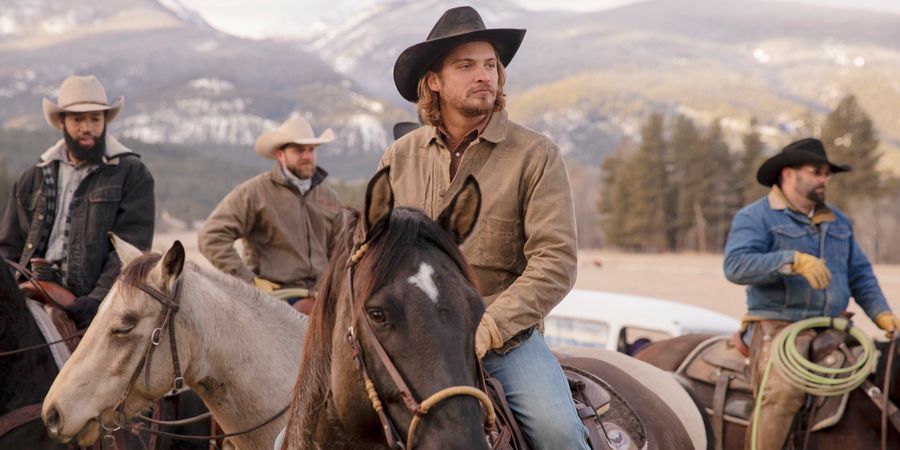 As viewers will recollect, Lee is long gone as he was shot dead in the series premiere episode titled ‘Daybreak.’ In the episode, Kayce reunites with his family after many years and spends time with Lee and Jamie. From their interactions, it is clear that Kayce loves his brothers and does not wish them any harm despite their difference of opinion. Later in the episode, Lee leads a group of ranch hands and Livestock Agents on a quest to reclaim some cattle stolen from the Yellowstone Ranch.

The group tracks down the cattle to the Broken Rock Reservation, where Kayce is living at the time. As the folks from the reservation try to fend off the intruders, the situation gets chaotic, and a gunfight breaks out. During the chaos, Lee realizes that Kayce is one of the people working against him. However, before Lee can flee the scene, he is shot by Robert Long, Kayce’s brother-in-law. In the meantime, Kayce recognizes Lee and swoops in to save his brother killing Robert in the process. However, Lee’s wound proves to be fatal, and he passes away.

Although Kayce doesn’t directly kill his brother, his presence instigates the gunfight that eventually leads to Lee’s death. Kayce’s presence on the scene distracts Lee during a crucial moment, and he ends up getting shot. Thus, Kayce inadvertently caused Lee’s death. While Kayce isn’t actually Lee’s killer, he still feels some responsibility for his brother’s passing, as evidenced during the show’s first season and Kayce’s dream in the season 4 finale. Ultimately, while Kayce didn’t kill his brother, he did end up killing his brother-in-law, Robert Long, in the heat of the moment.